An MMORPG based on the Games Workshop franchise developed by Mythic Entertainment and published by Electronic Arts. Some of the features were brutal RvR battles (Realm vs Realm) and siege warfare. Warhammer Online was shut down December 18th, 2013.

Warhammer Online: Age of Reckoning is a "Massively Multiplayer Online Role Playing Game" developed by Mythic Entertainment, the studio behind Dark Age of Camelot. The game isn't based on any games before it but rather on the existing Warhammer universe. It was published by Electronic Arts in American and Oceana and GOA in Europe, however on June 29th 2010 the European operations transiationed back over to Mythic Entertainment.

Warhammer Online features realm versus realm gameplay between the Armies of Order and the Armies of Destruction. Each side will have three different races to choose from, and each of those will have up to four different career choices, some of which are gender specific. Additionally, the Greenskin army only has one gender, which appears visually to be male.

The ultimate goal in RvR (Realm vs Realm) combat is the complete destruction of the enemy's capital city. This is achieved through a constant struggle for territory in the frontier zones. Everything you do in the game will contribute to the WAR effort.

Different types of RvR combat include

The Armies of Warhammer Online

Warhammer Online features next generation Realm vs. Realm (RvR) combat. This takes place within three different racial pairings: Dwarfs vs. Greenskins, Empire vs. Chaos, and High Elves vs. Dark Elves. Although there are only 2 races per pairing, players may travel to either of the other two pairings to help fight with their friends and allies. There are four types of RvR combat: Skirmishes (random world PvP), Battlefields (object-driven battles in RvR-specific areas), Scenarios (instanced, point-based battles against the opposing faction) and Campaigns (invading enemy lands and capital cities). RvR contribution includes both Player vs. Player (PVP) combat and (to a lesser extent) Player vs. Environment (PvE) quests so that you can assist your realm in their victory.

All activities in WAR contribute to the campaign, as it is the primary focus of the game. Each of the aforementioned activities generate victory points (VP) which measure a realm's progress in capturing a zone. When one realm reaches a designated amount of victory points in a particular zone, that zone falls under their control and the war pushes deeper into enemy territory. This back and forth struggle for zone control continues until the war eventually reaches one of the capital cities where the attacking side may sack, loot, and pillage that capital city. The capture of a capital city is the ultimate objective of the campaign. .

Keeps can be captured for victory points towards your realm and can be claimed by the capturing guild. NPCs will be stationed at all keeps (claimed or unclaimed) to ensure a certain level of difficulty is maintained and that at least 1-2 full groups are required to capture. Should players decide to defend it, the difficulty in capturing the keep will increase greatly. The game design decorates each keep according to the race that controls it; however, the basic layout will stay the same. Siege warfare includes four types of weapons: rams for keep doors and other targets, ballistae for enemy players or siege weapons, cannons, catapults, and trebuchets for AoE (area of effect) splash damage, and boiling oil to use from keep walls. Strategically located near keeps, siege pads can be destroyed by players of the defending realm, inhibiting the siege process.

Scenarios are instanced RvR games in which the forces of Order and the forces of Destruction fight for the highest score. Unlike Open RvR, scenarios may be joined from anywhere in the world; when a scenario instance is available, the player will be notified and can join with the click of a button. Scenarios come in different varieties, such as capture the flag, bombing run, or domination. There are separate sets of scenarios for each tier, although from time to time, there will be special events that offer certain lower-tier scenarios to all players. Scenarios are tied to racial pairings, so that a win or loss affects the domination points of each side for that racial pairing. Scenarios are capped in terms of the number of players, and if a scenario population becomes unbalanced in favor of one realm or another, it will end without awarding a victory or loss to either side. Players may leave a scenario early, but they will be subject to a Quitter debuff, which prevents them from gaining experience points or renown for five minutes.

In patch 1.3.6 WAR brought in completely revamped city sieges, which is 100% RvR driven. Each siege will end with a climactic battle of the two opposing faction leaders in a duel and each realm assisting their king in anyway possible.

Warhammer Online features a "Tome of Knowledge" (ToK) that is an extension upon similar mechanisms in many other MMOs. The ToK is a multi-purpose reference tool that is designed to provide the player with a great deal of information about the game world. It is also meant to serve as a reduction in the need for players to feel like they have to rely upon third-party sources of information pertaining to the game. The Tome of Knowledge keeps track of all information pertaining to an individual character and their progress through the game. This progress unlocks lore-related information about quests, the gameworld itself, NPCs, and defeated MOBs. For example, upon first encountering a MOB within the game, a basic entry is added for that creature in the Bestiary chapter of the ToK. However, with increasing contact, kills, and associated activities involving any specific creature, the information available about those encounters will be added to the Tome of Knowledge. Likewise, the ToK keeps track of the story and progression of the character through the gameworld as they complete quests, explore the map, and otherwise accomplish activities within the game.

Public Quests are area-specific, ongoing quests that are automatically assigned to each player that enters the area. All players are automatically working on completing that same quest (if they choose to do so). They typically conclude with a large "Boss Battle" fight. When a public quest completes, each player who participated will receive a reward based on his contribution to the whole. Public quests are confined to PvE zones and as such only indirectly affect RvR. Public quests have 3 reward-tiers: basic rewards, advanced rewards, and elite rewards. You are allowed to choose one reward from each tier per chapter.

Warhammer Online features collision detection, a feature that prevents players from moving through other player characters. The feature works on both hostile units and friendly ones, but only when flagged for RvR combat. This feature creates added layers of strategy to combat, as Tank-type characters can literally block off a choke point while ranged attackers fire on the enemy from behind them, with healers able to heal the tanks without coming under attack from the enemy.

Before Mythic Entertainment, a studio called Anthill Studios which was later acquired by Climax Studios and renamed "Climax Nottingham" was working from 2000 on a Warhammer Online game of their own, even showing a trailer at E3, some behind the scenes videos here and here, and was even presented by Paul Barnett (who worked at Games Workshop at the time and later joined Mythic Entertainement) at Screenplay Festival 2004. However in mid 2004 due to the costs involved in brining the game to market was cancelled. The game was to be published by Sega Europe.

In 2005 Games Workshop was approached by Mythic Entertainment with a pitch for a new Warhammer Online MMORPG. The original design was to have three factions; Order, Destruction & Chaos and was for the first half of its development lifecycle was aimed to be a PvE focused game to compete more directly with World of Warcraft whilst a sequel to Dark Age of Camelot would focus on RvR content. However the sequel was later cancelled and the RvR elements were adapted into Warhammer Online.

The game was originally also planned to have an Xbox 360 release which Mythic had a working prototype.

After the success of the Land of the Dead expansion Mythic had planned for a Vampire Counts themed expansion dubbed "Bloodhunt" however this was cancelled halfway through development and resouces were poured into Warhammer Online: Wrath of Heros.

The launch did recieve some criticism due to bad client performance on low-mid computers and lag due to high density of players caused by the Realm vs Realm design. This lead to Mythic Entertainment removing Fortresses from the game, due to large amounts of players being able to crash the servers on demand if they were losing.

The game was later released on Mac OS X as a beta on 30th July 2009 utilizing a a Wine Wrapper called Cider by TransGaming Technologies. As there is no x64 version of the client and the translation was based on the Windows x86 version the client would not work on macOS Catalina, however is compatible with Crossover. 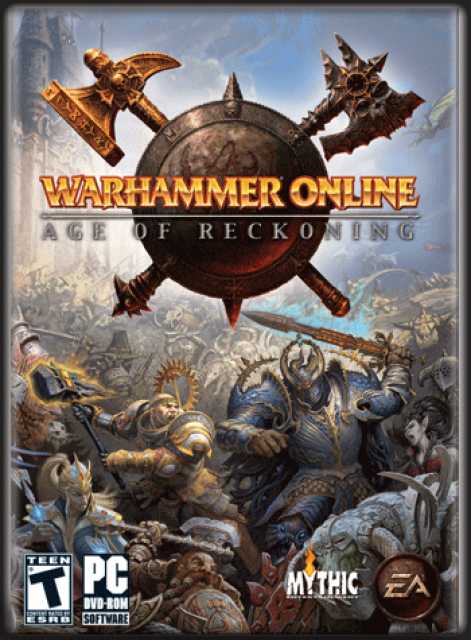