released as a download through the PLAYSTATION Store and as a Blu-Ray disc either with an official PLAYSTATION 3-branded BlueTooth headset or as a standalone product. In SOCOM: Confrontation, you can take sides in either the Commandos (which also feature Special Ops), or the Mercenaries. It is the only game that has the rights to the NAVY symbol and title (U.S. Navy SEALs). Although it is not officially endorsed by the SEALs, the developers to get help from former SEALs in order to get a sense of how the SEALs communicate, what guns they use more frequently, and the clothing they wear.

Several of the maps featured in this game will be based in Algeria, North Africa. The levels have been scaled down significantly from those in the last two previous games in the series (console games, not portable games), since the developers wanted to create a more intimate combat experience. Vehicles have also been excluded from the game for this reason. Some of the confirmed classic maps in SOCOM: U.S. Navy SEALs Confrontation are:

Along with these three maps, four others confirmed are new maps, featuring:
All the seven maps can be played with seven different modes a player can choose from, such as:

SOCOM: U.S. Navy SEALs Confrontation will include 32-players per game maximum, ranked and custom unranked games, customizable weapons, and proximity chat, where the enemy can hear the player's team conversations if they are nearby. Whatever is said while wearing the headset is relayed to the world in Confrontation regardless if the "Talk" button has been pressed. The levels will also have some items destructible, such as cars. The equipment the character wears will affect his mobility, along with his/her stats.

SOCOM: U.S. Navy SEALs Confrontation has customizable maps, weapons, and characters. The maps can be customized to any size to accommodate the number of players, so they are not always so large if you want to play with a small group of people. The weapons can have attachments, with primary weapons (assault rifles, machine guns, sniper rifles) accepting a maximum of two attachments, while secondary weapons (pistols) accepting only one attachment. Lastly, player can create their Commando and Mercenary from the ground up, giving them their own, unique look.

The lobby system is making a return in SOCOM: U.S Navy SEALs Confrontation, with players being able to choose the games they want to play instead of a matchmaking system doing it for them if they so wish. Games in the lobby system are divided by Briefing Rooms. Each Briefing Room can hold a total of 256 players, and in these rooms, a server list displays all the current games running a player can join. Players can join ranked, or custom unranked games from here. Ranked games can be created by a player, but options for the game come from a pre-set playlist in order to prevent cheaters from changing gameplay options to gain a higher rank at an alarming rate. Unranked games are fully customizable.

Along with a lobby system, SOCOM: Confrontation also comes with a standard matchmaking system, where those that want to find a quick game can jump in and do so. This matchmaking system works just like any other, giving the user to choose options such as game modes, maps, etc.

SOCOM: U.S Navy SEALs Confrontation now has a tournament system where players can register to participate in tournaments as a team or as a free agent. Teams are separate from clans and if players do not create one or request to join one they will be automatically assigned to a team before the start of the tournament. Tournaments are accessed through the ingame calendar. When a player is successfully registered into a tournament he/she will be contacted automatically via an ingame message and will receive a game invite 10 minuets before the start of the match.

Clans can now participate in the clan ladder, where ranked clans can challenge those who are ranked above them and be challenged by those below them. Participation in the clan ladder is up to the clan leader and when ladder matches are accepted the game will automatically schedule the match and send pre-game messages and game invites. When the match is over, if the lower ranked clan wins they switch places with the higher ranked one, if the higher ranked clan wins they keep their spot thus defending their place on the ladder.

Clans have always been a big thing in the SOCOM: U.S. Navy SEALs franchise. In this title, the clan system will be completely revamped. Rosters can have up to 64 players. Games can be scheduled via an in-game scheduling system. A clan calendar will also be available where members can check events they have during that time, including clan wars. Each clan will have a special emblem they can create, which will go directly on your soldier. Clans also have the ability to assign Special Operations Forces.

In SOCOM: U.S. Navy SEALs Confrontation, a player can choose from any five Special Ops to play as, such as:
These Special Ops will have special weapons and equipment that is not available to others, corresponding to where they're from.

Slant Six Games is planning on using their web site, SOCOM.com, to allow the player to log in via their PLAYSTATION Network ID and check many things, such as their clan calendar, roster, rank, leaderboards, and much more. Currently, SOCOM.com acts as a blog where Slant Six posts the latest content they have to their fans. Due to the importance of the game's server issues however, SOCOM.com lacks many of the features planned. Slant Six has commented that these features in addition to many of the features that don't appear in the game currently will be added soon.

At it's launch on October 14, 2008, Confrontation suffered from problems with online connection and stability issues.  The game also lacked many of the features promised on the game box and detailed in the game manual.  The game's developer, Slant Six  Games, has issued a number of downloadable patches since the games release to both address the online issues and add-in game features.  With the the most recent release, patch 1.41 (released to coincide with Confrontation's European launch), the gaming experience with SOCOM: Confrontation continues to improve; online play is lag-free generally and now includes almost all promised (and much requested) features such as a configurable party system for joining games and indication of your friends in-game location in the XMB.

Cold Front is the first DLC available for SOCOM: U.S. Navy SEALs: Confrontation, and was released on Dec. 17, 2009. It's debut price was $9.99 until after Dec. 20, and now it costs $14.99 to download as the first price was exclusive for the first three days. 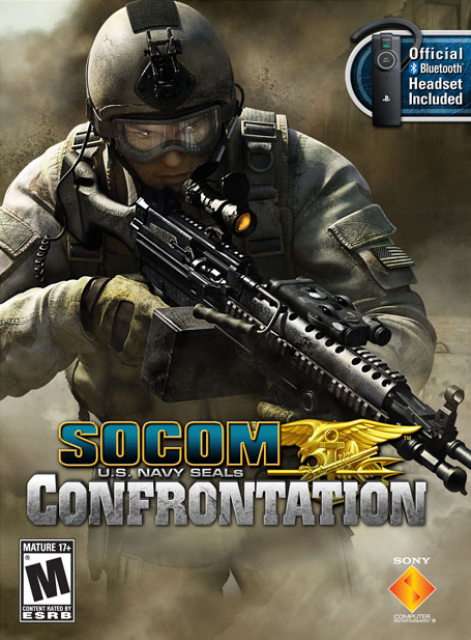