Piñata Island is once again under siege by Professor Pester and his gang of Ruffians.While attempting to steal valuable information, the professor has instead managed to delete all of the data stored in the Piñata Central computer. As a result, all knowledge about piñata species and which piñatas are needed for which parties has been lost, leading to chaos. The player is tasked with restoring order by rebuilding the database, achieved (at least in part) by enticing piñatas to inhabit the garden, filling them with candy, and sending them off to parties around the world.

Viva Pinata: Trouble in Paradise improves upon the game play of the first game by adding additional functionality and content. Aside from the inclusion of some 30 new piñata species like penguins, boars, crabs, and camels, the game seems to provide significant new gameplay functionality as well, including complete co-op modes, a system of trading cards, a photography mode, and Xbox Live functionality to share custom piñatas and toys.

Viva Pinata: Trouble in Paradise maintains a very similar gameplay mechanic to that of the original Viva Pinata Game. The overall premise is still to attract into your garden as many different varieties of pinata as you desire. You need to meet certain requirements to attract different types of pinata (for example Whirlms need dirt, Sparrowmints need Whirlms etc). As with the original Viva Pinata, each species of Pinata has different romance requirements in order to breed more pinata. The romance mini-game has also been retained from the previous game, but now allows the player to enter a closer camera view and requires them to collect a minimum number of hearts instead of chocolate coins.

You can evolve some pinatas by feeding them different objects or even by performing different actions with them. In Viva Pinata: Trouble in Paradise, pinatas also have the new ability to learn 'tricks' by being fed different items. Players need to experiment with what items they feed their pinata and then, when the pinata reacts favorably, tap the pinata with the 'Trick Stick' in order to save the trick for future reference. Having pinatas learn and perform tricks increases their candiosity and overall value.

Players also need to maintain a delicate balance between the types of pinata they keep in the one garden, as many different species of pinata do not get along well together and may erupt into fights which can be irritating and time consuming. One pinata will inevitably become ill after a fight, needing to be healed (which costs money) or allowed to die.

Viva Piñata: Trouble in Paradise also adds new features to the game which weren’t in the first which make it a worthwhile sequel. The game is generally an open ended, sandbox like game, the aim of the game is to maintain your garden and also to attract different piñatas to your garden by editing the garden in specific ways.

Unlike the original Viva Piñata which would throw you straight into your garden the new Viva piñata: Trouble in Paradise has multiple modes which is a key addition for the sequel. It has 3 different modes, the first mode being the standard mode which is the games equivalent of a campaign mode, this mode features challenges from ruffians, sour piñatas and also other forces which you have to overcome to have a lushious garden. Just for fun mode which is where players can create there garden without any interference from any of the antagonists within the game, the mode also has unlimited money. The last mode is named Contests and is a mode where the player enters the his/her different piñatas into different concerts and win prizes from these different contests.

Within the game there are new species of Piñatas which are again a key feature to this sequel, these new species of piñatas come from two different locations: The Icy Piñartic and the arid Dessert desert. These piñatas will not visit your garden and you have to go and visit these places and have to try and capture these new piñatas in there own habitat which you can then bring back to your own personal garden.

Viva Pinata: Trouble in Paradise also adds new shortcuts to help gamers save time instead of browsing through an endless stream of menus. This sequel offers items such as the 'Seed Bag' which is accessible through the D-Pad, allowing players to quickly access their seeds. There are also quicker ways to scroll through anything in the garden including your various pinatas, plants, seeds, buildings, fertilizers and items.

The new game also changes many aspects of the previous Viva Pinata game. Many of the pinatas you may remember from the last game now have different appear, visit and romance requirements, adding a new challenge and dimension for players who were comfortable with the previous title. New sours have also been added, giving you more problems to contend with in your garden.

Getting your pinatas to reach 'Max Candiosity' by feeding them things they like, renaming them, providing them with accessories etc. also has an observable positive effect, allowing you to gain more money by sending these pinatas to mission assigned parties, and also by allowing certain pinatas to create produce (such as wool, honey and milk) which you can give to other pinatas or, if you feel like it, sell for money.

Hootyfruity vision card Piñata Vision is a new feature which will allow players to download cards over Viva Piñata's official website and then printed out. The cards are then held up to the Xbox Live Vision Camera peripheral and depending on the card, a different effect will come into play within the game. Players can also use a picture of the card on a PDA or mobile phone and hold that up to Vision Camera instead of the physical card. The Iphone has an application that can load up pinata cards for scanning with the vision camera as well. Players will also be able to create their own cards and trade them online.

Viva Piñata: Trouble in Paradise requires 5.2 GB of space to install on an Xbox 360 HDD. It requires 4.9 GB after the new dashboard update (Preview Program). 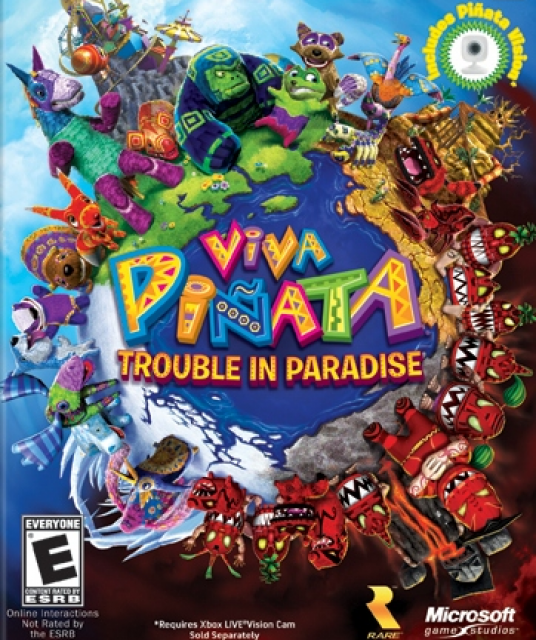