The events lending up to EndWar begin with the signing of the SLAMS (Space-Land-Air Missile Shield) Treaty in 2011. This treaty between the United States and the European Union allowed for the co-operative development of anti-ballistic technologies and systems. This meant that any Intercontinental ballistic missile launched could be destroyed. The shield was activated in 2014; Russia however, having been left out of the treaty, began accelerating their development for a similar system.

Tensions between the superpowers grew, until in 2015, when oil reserves started to run dry and the world was plunged into an energy crisis. This was followed by a nuclear war between and in 2016, lasting 5 hours,  leaving 20 million dead, and destroying the oil-rich countries of Saudi Arabia and Iran. This left Russia as the world’s biggest supplier of natural gases and crude oil. With this surge in the economy, Russia invests billions in the biggest arms build up since the cold war. To prevent another nuclear war, in 2017, the USA and Europe deploy a space-based missile shield, which was quickly countered by Russia’s advanced missile defense system. This rendered all ICBMs useless. These events forced the EU to form a singular political, economic and military power, named the European Federation (2018.) The most notable exceptions are Britain and Switzerland , who declined membership. This formation creates a superpower, which power rivals both the Russians and the Americans, causing fracture in relations with the USA.

The same year, the USA announced its plans for a high orbiting space station, the ‘Freedom Star,’ to be in orbit by 2020. This station would allow them to deploy Marines anywhere on the globe in 90 minutes. This project is met with extremely negative reaction, with the EF particularly objecting, as the development would bring an imbalance of power. With relations completely broken, EF withdraws from NATO in protest, however the continues with the program. In 2020, the final module of the Freedom Star is attacked on its launch pad, forcing the rising tensions between the three superpowers to breaking point, and the beginning of the Endwar.

EndWar is a real-time strategy game that deviates from the genre's PC-oriented conventions in the interest of streamlining its gameplay on console controls. As such, the player doesn't view the action from the traditional overhead perspective and move a free mouse-like cursor over the battlefield. Instead, the camera is situated much closer to battlefield-level, and the player cycles the focus from one selected group of units to the next at the touch of a button. The game contains an optional voice-activated interface that allows the player to control all game functions -- selecting units, coordinating attacks, and the like -- entirely with spoken commands.  There is an initial set up of the voice commands early in the game, which only takes a couple of minutes.  The voice commands work well most of the time if the orders are said competently, but the game recognizes many commands even when not said perfectly.

Battles begin with usually 2 to 3 units selected during the mission briefing stage of the battle deployed to the battlefield.  Sometimes the player gets 8 from the start.  Players then rush to control uplink sites throughout the map.  Each uplink will grant additional strategic points and they can also be upgraded to allow support abilities or to add defensive drones to uplink sites.  These points can either be used to request reinforcements or battlefield aids such as air strikes or EMP strikes.  As units take damage in battle their health and shields decrease until both are below 25%, once units reach this critical state their shields are instantly boosted to 100% and a heavy transport helicopter is called in to evacuate the unit.  Units in this state pose no further threat to enemy forces and can be safely ignored.   As the battle progresses both sides victory battle bar increases with each unit destroyed or uplink captured until the End War phase is reached.  Once this happens reinforcements and support powers become much cheaper along with the loser gaining the WMD ability, however once it is used the winning faction also gets their WMD ability, meaning that choosing to not use the ability at all may be a better strategy.

There are a number of mission supports that can be used by players to bring a specific military support to the battlefield to aid the player.  They must be purchased in the barracks.  Most require at least 1 upgraded uplink.

The player gets an after-action report at the end of each match.  From there the results for each unit can be seen, as either survived, killed in action, or promoted.  Each battle gives a command rating based on how well the player performed in a percent grade.  Funds earned are shown in the report, which vary depending on command rating, player experience, and map bonuses.  Mission Support requests, medals,  awards, and mission results compared to the players faction are shown as well.

As part of the military and arms build up, the Spetsnaz were modernized with modifications to existing technology and systems. Everything from weaponry to vehicles was modified to suit, resulting in standard-issue equipment being worked beyond their original capabilities. Its ranks are composed of hardened veterans from other conflicts, trained and specialized in heavy weapons and armor. Comparatively, the Spetsnaz are the toughest armed forced to deal with, relying on superior firepower and heavier armor to always overcome the enemy.

In response to the increasing threat presented by both the US and Russia, the EF formed the Enforcer Corps. The Enforcers are a collection of high-skilled and trained counter-terrorist and peacekeeper forces, selected from across Europe’s elite forces; with the most notable being members from the Rainbow Six counter-terrorist unit. With specializations in urban warfare, the Enforcers utilize a combination of electronic and energy weaponry, as well as the fastest vehicles of any force.

With the completion of the controversial Freedom Star impending; the United States uses the Joint Strike Force for their military operations. Based on the Marine Expeditionary Units, the JSF is renowned for its implementation of integration technologies, combining air and ground combat capacities. The JSF use state-of-the-art technologies, such as stealth and robotics, to allow for specializations in rapid deployment and highly accurate weaponry. This force is led by Scott Mitchell, of the Ghost Recon squad.

Units are reinforced by mission supports, such as air strikes, deep strikes and EMP blasts. This far supports are gained by the capture and upgrading of critical points on the map. Super weapons can also be used, which each factor having their own unique WMD. The JSF have a Kinetic Strike, the Enforcer Corps have an Orbital Laser Strike , whilst the Russian’s use a Nuclear Warhead.

At a start of a game, the player must choose a battalion. Each battalion has a different specialization and units, such as airborne, mechanized, armored, signals, or assault. The type of battalion determines the type of bonuses that units can use. For example, Airborne Gunships immediately have access to a rocket barrage that deals both ‘kinetic damage’ and ‘blast damage.’ Each unit also has their own persistent experience, which carries over from each battle. There are up to six levels of experience, each increasing the effectiveness of the unit. However, if the unit is killed in action, the unit and experience is lost. To prevent losing units in an unbeatable situation, the unit can retreat.

The battalion can further be customized in the barracks. From here, the player can customize the motto, heraldry and even battle camouflage, as well as purchase upgrades for each unit. These upgrades are purchased with CR (gained through each successful battle), which range from increased armor for tanks, to sniper rifles for riflemen, to anti-air rail guns for transports. Each factor has around 150 upgrades.

During the campaign it is possible to change the battalion you are a part of.  This will allow you to choose a battalion with different bonuses and squad numbers, this means that purchased upgrades and credits will be kept but unit's experience will be lost.  You are also able to change which faction you are a part of, however by doing this all unit upgrades, experience and credits are lost.

On October 16 a demo came out on Xbox Live for Tom Clancy's Endwar. The demo is over one gigabyte in size and one map available for singleplayer or multiplayer 1v1 use. The demo also features standard voice commands . It is currently available everywhere worldwide except Switzerland.

A beta version of the game was tested between June 16 and July 9, 2008. This was only available to Xbox Live Gold users and contained three maps in both 1v1 and 2v2 match variants. Participants were asked to sign a non-disclosure agreement for the beta. After the conclusion of the beta, Michael de Plater posted on a development blog and thanked the players for their participation. He also provided a ‘Post-Beta Round Up,' which commented on various aspects of the beta. It was stated that the build used for the beta was older and ‘much worse than you want the final game to be.’ It was also said that every unit has been tweaked and balanced from the beta feedback.

A "VIP demo"(also known as stress test), was due to start mid-September. Participants were required to have pre-ordered the game and obtained an 'Enlistment code' to access the test. But after being dela yed, it was finally released on October 10, only 5 days before the official demo was released.

The Theater of War is the online massive multiplayer component of the game that much of the focus has been on since the games launch, much as Halo 3.  As such, it has been tweaked several times to improve gameplay.  Occasionally the developers have modified the map to move the pace.  During the first battle, the conditions were lowered for winning, to prevent it from going on too long.  The use of this feature has been important as wait times for matches have been long in the past due to less players and an imbalance in gamers per faction, mainly too many in the Joint Strike Forces (JSF).  As more players have joined the battle, possibly due to Christmas sales of the game, as well more sales generally since launch, wait times have been reduced.  However there are still periods of relatively long waits during certain times of the day, usually peak business hours in the United States.

Ubisoft has a page on their homepage updated daily with the Theater of War that shows the current state of the war at endwargame.us.ubi.com/tow.php.

On Dec 11, 2008, the Escalation Pack was released for Endwar as DLC.  It included 4 new missions on new battlefields, one unit upgrade per faction, and new achievements for the 360, and new trophies for the PS3.   The new missions include the Siege of the Kursk Firebase (Ukraine), the Assault on Devon beach (England), the Raid on Rota naval base (Spain) and the Conquest of Dorsey Knob (USA, West Virginia).

A title update was released the same day that added the option of 4 v 4 battles online.  Previously only 1 v 1 and 2 v 2 were available.  Also fixed was the glitch that allowed players to quit and not lose progress.  Now if players quit, if units have been killed in a match, they will be moved down to regular units.  This was implemented to discourage gamers from quitting games just because some of their downed units were killed off.

In an interview with strategy podcast Three Moves Ahead,  Ubisoft’s Michael de Plater discussed the making of EndWar.  He detailed the inspiration behind the game, the challenges of making a console RTS and what goals his team had for the game.  There is also some talk of what they are going to change in an attempt to improve upon the sequel. 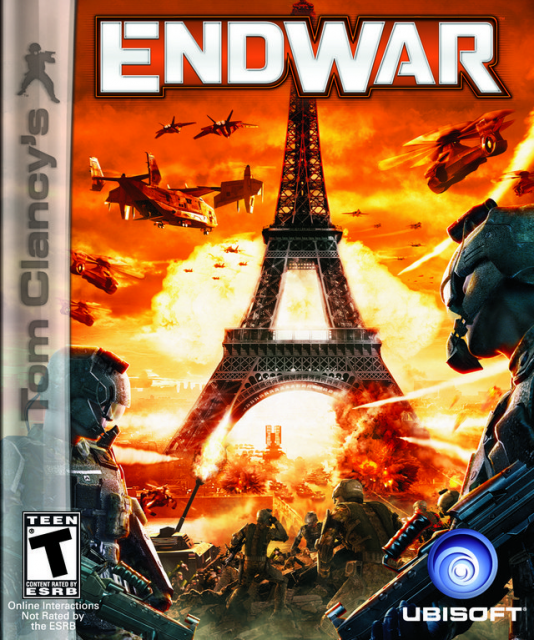