A game credited, in part, with the popularity of the brawler genre in the arcade craze of the 1980s and 1990s.

Originally released in 1987 in arcades, Double Dragon is an early brawler game credited, in part, for the popularity of the beat-em-up genre during the 1980s and 1990s. The game was first developed by Technos Japan Corporation and published by Taito Corporation, and has since been ported to numerous consoles, computers, handhelds, and even cellular phones. The game also spawned the popular Double Dragon franchise, which has had five games in the main franchise, as well as two Neo-Geo fighting games.

The game's popularity led to several sequels (with the latest iteration released in 2003), a cartoon series (which ran for two seasons), a comic book (published by Marvel, ran for six issues), and even a movie (which was released in 1994, inspired by the television cartoon). The cartoon and its resulting movie release were both loosely based on the NES version of the game, whereas Jimmy Lee is initially a villain (having been raised by the antagonist of the franchise, the Shadow Master).

The game's soundtrack was composed by Kazunaka Yamane, and was released in an album on February 21, 1988. The soundtrack, titled Original Sound of Double Dragon, features all nine tracks from the arcade version of the game. These tracks are all arranged versions of the songs found in the game.

Double Dragon follows Billy Lee and Jimmy Lee (incorrectly named Hammer and Spike in the promotional materials with the American version of the arcade game), two martial artists whose love interest, Marian, is kidnapped by a gang called the Black Warriors. Playing in cooperative mode triggers a different ending, where Billy and Jimmy must fight each other for the affection of Marian.

A three button beat-em-up, there are three base moves in Double Dragon; punching, kicking, and jumping. Various combinations of these moves produce other moves, such as head butts, elbow smashes, jumping kicks, backwards kicks, or the signature Double Dragon hair grab (in which the character grabs the enemy by the hair, making them vulnerable to attacks and throws).

In addition to moves, Double Dragon has a variety of weapons that can be carried from fight to fight (this was altered in the NES version, where weapons could only be used if the enemy it was taken from is still alive). There are four weapons; baseball bats, whips (neither of which are incredibly effective), knives (which are arguably the most powerful weapons in the game), and explosives (timed explosives which can be thrown).

Released in 1988 (and later on the Wii Virtual Console in 2008), the NES version of Double Dragon was among the better received ports of the game. Published by Tradewest, Double Dragon on the NES has many differences from the arcade game on which it is based, beyond the obvious decrease in graphical and sound quality. The plot was altered, due to the exclusion of a two-player cooperative mode. Rather than fighting the leader of the Shadow Warriors, Billy Lee faces off against his brother, Jimmy Lee.

Other than the single player story, there are a few other modes that implement two player gameplay. Mode A allows players to do a tag-team style game, alternating who is playing after each death. Mode B is a one-on-one tournament fighting game, where players can choose to fight either computer controlled opponents or player controlled characters.

The game also implemented an upgrade system, where players earn hearts for dispatching certain amounts of enemies. These hearts upgrade the character's abilities, allowing for more complicated moves such as backwards elbowing and face punching. In addition to moves, there are a variety of weapons available, ranging from baseball bats to whips (as well as ranging in damage dealt, and subsequently usefulness).

There are many other differences found in the NES version, some due to general technical limitations. For example, only two enemies can be onscreen simultaneously due to the NES's abilities. Naturally, the stage design deviates from what was found in the original arcade version, including new areas, expanded sections, and completely new levels.

After the NES version was released, Sega brought the game to their 8-bit platform as well. Due to the Sega Master System's more powerful hardware, the Master System version has better graphics (with more colors), more enemies on-screen, and modes and levels that are very similar to the arcade version.

In 1992, Double Dragon was ported to the Sega Mega Drive/Genesis. This game was developed by Ballistic, and is very similar to the arcade release. Double Dragon on the Sega Genesis was criticized for one key aspect; its control. The game, according to fans and critics, makes it incredibly difficult to hit enemies, with small hit boxes and sloppy movement.

The game has had three different handheld ports; Game Boy, Sega Game Gear, and Atari Lynx. The first of these three versions was released in 1990. The Game Boy version of Double Dragon is heavily influenced by the NES game, with similar level design, enemies, and overall graphical style.

The Game Boy version varies on one key aspect from the NES Double Dragon; it does not include the heart system found in this game. Every move is accessible from the start. In some areas, portions of stages were removed completely for the Game Boy port, particularly some platforming segments of the final stage. Additionally, every character in the two player fighting mode was removed except for Billy Lee and Jimmy Lee.

On the Game Gear, Double Dragon was significantly different from other versions of the game. Subtitled "The Revenge of Billy Lee" in Europe, this game centers around the murder of Jimmy Lee, and Billy Lee's quest of vengeance against the Dragon Clan. Other than this, the game was largely a different game, with altered stage design, different weapons (i.e. guns), and the lack of any modes beyond a single player story mode.

With large sprites, the Atari Lynx version is another recreation of the original arcade game. Giving only a small view of the stage, the game was criticized due to the fact that enemy and character sprites take up nearly three fourths of the Lynx's screen size. The Atari Lynx version also includes a practice mode, which allows players to fight a varying amount of enemies to learn the controls and moves of the game.

In 2003 the game received an enhanced remake for the Game Boy Advance in the form of Double Dragon Advance, which added several new features including cutscenes, additional levels, and new moves.

In 2011 a smartphone version of Double Dragon was released on both iPhone and Android. Rather than a straight port, this version adds several features, some of which originated in the Game Boy Advance remake. In addition to the Lee brothers, players can unlock 24 playable characters for use in any mode.

Like the sequels to Double Dragon, Binary Designs worked on computer ports to create a variety of versions of the game. Additionally, a second Commodore 64 port was created by Ocean Software, and differed in many ways from the previous Commodore 64 port. While all of the games naturally differ from the arcade game on which they are based, there are several relevant details relating to the ports.

The ZX Spectrum version was incredibly different when it came to graphical style. Due to an attempt at the detail of the arcade version, this version had character and enemy sprites which were transparent other than the black outlines. This, combined with an attempt at some detailed color, caused the game to run very slowly.

Both of the Commodore 64 ports were very close in style, attempting to emulate the gameplay of the arcade release (the first even included a two player mode, almost unheard of among the computer ports). A major difference for the first version was a complete lack of sound, other than the sound effects created by punching and kicking. The second version lacked a two player mode, although it is considered by Double Dragon fans to be a slightly better port.

Also released for the Atari 2600 and Atari 7800, these two ports were handled by Activision. The 2600 version of the game naturally cut much of the game's content; with redone sound and graphics to fit the platform's capabilities, removed enemy sprites, cut weapons, and a shorter story mode (although there is still a two player cooperative mode, as well as a two player versus mode). The 7800 version was improved graphically and sound-wise, although it removes the versus mode.

A version for the Zeebo was developed by Brizo Interactive Corporation and published by Tec Toy. This version differs in that there are six stages instead of the original four. The first, third, and final stages are re-worked versions of their arcade counterparts, but the other missions are new to this version. The Zeebo version also contains mostly re-worked or entirely new enemies. This version also has an updated visual style. 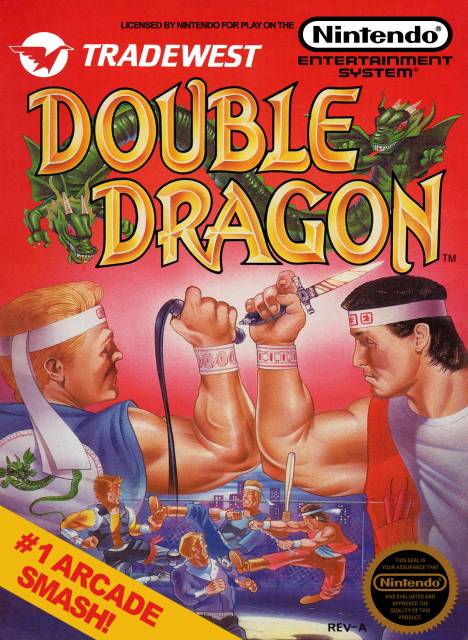