Dynasty Warriors 6 is the first game in the series to feature a redesigned engine to take advantage of the power of the Xbox 360 and Playstation 3. As in previous entries in the series, the game takes a hack-and-slash approach to depicting scenarios adapted from the novel Romance of the Three Kingdoms. In Musou Mode, the player guides a warrior through his or her own story as the nations of Wei, Wu, and Shu fight to unite China under one banner.

With the introduction of a new engine, the gameplay in Dynasty Warriors 6 has changed quite a bit from its predecessors. The basics remain the same, in that a player selects an officer, heads into battle and defeats enemy officers and waves of enemies while completing objectives. However, the player now has several new abilities.

The most notable new ability comes in the form of the Renbu system. By attacking enemies and creating attack change, the Renbu guage will fill until it reaches a higher level, at which point the player character's attacks will become more powerful. A higher Renbu Rank also allows for more attacks. However, if the player goes without attacking enemies for a time, the guage will gradually deplete and the Renbu Rank will drop. Each character begins with a maximum Renbu Rank of 2, but as characters level up and earn sSkill points, Third and Infinite Ranks will become unlocked. The player may also find an item on the battlefield that grants the player character Infinite Renbu Rank for a brief time, even if Infinite Renbu has not been unlocked for that character.

As mentioned above, character progression is now handled using skill points. As a player defeats enemies and earns experience points, skill points are awarded when a character levels up. At the end of battle, the player may then distribute these points to unlock new skills and stat bonuses on charts that are similar in ways to the Sphere Grid found in Final Fantasy X.

Each character has access to a special attack that can be triggered if he or she has a tome in stock. The special attacks vary from character to character and can be enhanced by unlocking new special attack abilities when spending skill points. Special attacks are particularly useful for taking out large groups of enemies and can help fill the musou guage quickly.

Other new features include the ability for characters to climb ladders and swim across water, making the environment less of an impedement than it was in previous games. Enemies may also become temporarily confused and drop experience items on defeat when performing surprise attacks by dropping into enemy bases from above. Also, in addition to the primary objective of each stage, each battle features three objectives which provide experience bonuses when cleared. Some characters can only be unlocked by completing specific stage targets.

Dynasty Warriors 6 does not feature online play. However, high scores earned in the game's Challenge Mode can be uploaded to online leaderboards.

Dynasty Warriors 6 requires 6.8GB of space to install on an Xbox 360 HDD. 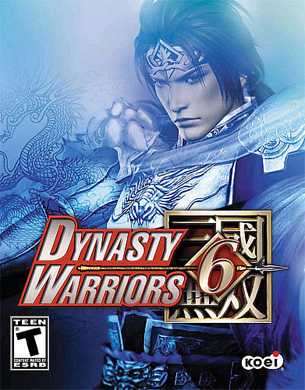