Destroy All Humans! Path of the Furon

The third game in the Destroy All Humans! series, Path Of Furon depicts Cryptosporidium 139 in his attempt to save the Furons from an evil alien species.
Xbox 360 PlayStation 3

Destroy All Humans! Path of the Furon takes players on a journey through thirty different missions and over twenty side missions, all of which feature destruction and enlightenment themes, this time in the context of the funked out '70's. This instalment of the franchise adds new weapons, more opportunities for destruction, and expanded open-world gameplay. Protagonist Crypto is also gains new mental abilities from an alien kung-fu faster. On November 26, 2008 THQ announced that the PS3 version of the game had been cancelled due to troubles working with the cell processor, but eventually the game ended up releasing it in mid-February 2009 anyway.

In Destroy All Humans! Path of the Furon, players pick up where prequel Destroy All Humans! Big Willy Unleashed leaves off, controlling Crypto in the 70s when a mysterious new enemy attacks Earth, sweeping Crypto up in a conspiracy that unravels his way of life and threatens the survival of the Furon race. Players use the monkey Pox and the loyal minion Crypto gained in Big Willy. They invest this money in a casino called "Space Dust" in which they have an stable stream of human DNA as well as dollars. The game revolves around Crypto's lack of enthusiasm when killing humans, this is due to his alcohol abuse and lethargic lifestyle. The whole plot turns around when the casino runs into trouble with the Mafia. Crypto discovers the conspiracy when fighting some of the "Nexo" Mafia robots, which originate from Crypto's homeworld. At this point Crypto has returned to his human-hating self. 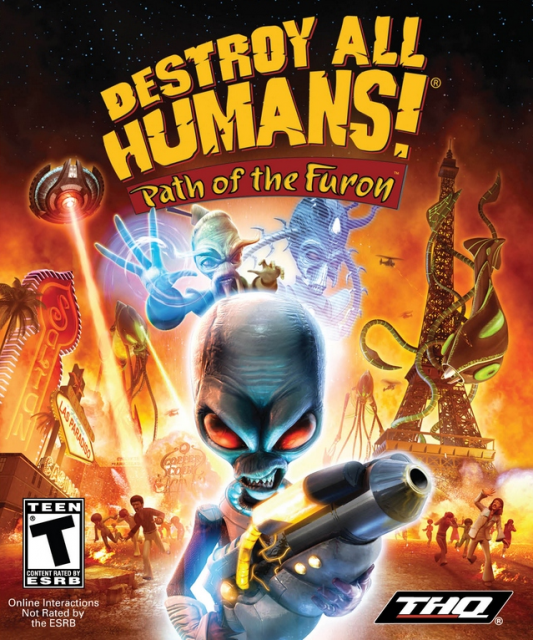