Inspired by Kento Cho's TUMIKI Fighters, Blast Works: Build, Trade, Destroy is a shooter that allows players to fuse enemy ships with their own in true Katamari fashion.

Blast Works’ is an arcade shooter heavily inspired by TUMIKI Fighters, another arcade shooter made by independent developer Kenta Cho. Both Blast Works and TUMIKI Fighters utilize a fusing system, in which any enemy drained of its health would be able to join with the initial fighter plane. Blast Works also comes complete with a full-fledged editor mode where players can edit everything from the background to the shape of the bullets being fired.

The most noticeable part of Blast Works is the fusing mechanic. As mentioned in the overview, any enemy fighter with drained health becomes available for fusing; these planes are identified by their turbulent decent. As soon as an enemy becomes fused to the main ship, it essentially switches from being a bad guy to a good guy. Fused enemies will fire in the same manner that they were before switching sides; their bullets will turn blue, they will set to auto-fire and they will fire in the direction that the exit barrel is pointing. Fusing extends the physical body of the entire ship, so any other drained enemies will attach at the nearest solid point. The initial fighter can only sustain one bullet, but by fusing, the enemies act as effective shields for an oncoming barrage. Unfortunately, should a fused portion sustain too much damage, it will fall off. Fortunately, players can pick it up again should they so choose.

To avoid losing parts, players also have the option to entirely hide their fused piece at the press and hold of a button. While this prevents any pieces from falling off, the negative side is the fact that the main body is exposed and it becomes easier to get hit. Hiding also has a subtle positive of increasing field visibility as ship fusions can grow as big as the entire screen.

In Campaign Mode, up to two players can enter the fray through three different difficulty modes (Rookie, Pilot and Ace). Here, players play through a preset map with preset enemy patterns. Unfortunately, none of the changes to the fighter made in the Editor will carry over here. This mode stretches between five different campaigns, each of which has their own unique setting. At the end of each campaign, there is a boss encounter. When the next campaign boots up, every ship that was previously fused will be gone and the players must start from scratch. Any high scores obtained in this mode are kept locally and not through Nintendo Wi-Fi Connection.

Blast Works' Arcade Mode is almost exactly the same as Campaign Mode except that up four players can join in. The objective of Arcade Mode is to get the highest score against all competing players instead of trying to make it through the campaigns. Like Campaign Mode, high scores are only kept locally.

Here, players can compete on levels that they themselves designed or that others have. Through Nintendo Wi-Fi Connection, you may download levels from friends or enthusiasts at the Blast Works Depot. Like Arcade Mode, up to four player may join and the objective is to get the highest score. Once again, high scores are only kept locally.

Here's where the game earns the namesake of "Build, Trade, Destroy": The Editor. In the Editor, players can truly make the game their own. Through the use of simple shapes, the cityscape in the Campaign Mode could just as easily be World 1-1 from Super Mario Bros. 3. The Editor as a whole consists of editors for shapes, bullets, ships, enemies and levels. In the Shape Editor, elements such as color, scale and angle can be mapped to specific shapes. The Bullet Editor allows players to change the shapes, the patterns, the colors and the parameters (fire rate, speed and size) of the bullets. For the Ship Editor, aspects like shape, weapon placement and weapon angle can be adjusted. The Enemy Editor dives even deeper than the ship Editor by allows players to change minute details such as the sound that plays when a specific enemy is destroyed or hit. Finally, the level editor changes the background and foreground environments. 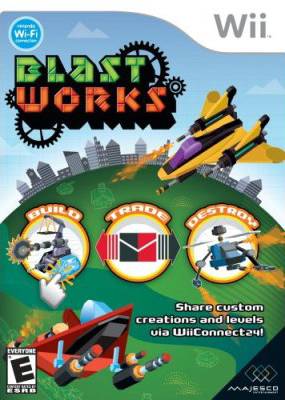