It's ninja versus yōkai in this elimination platformer from Jaleco.

Ninja JaJaMaru-kun is the first in the spin-off JaJaMaru-kun series derived from UPL's Ninja-Kid (Ninja-kun) Arcade games. Jaleco wanted to keep producing Ninja-kun games for the Famicom, so devised a "younger brother" of the original Ninja-kun that would have adventures of his own. Jaleco hired freelance developers TOSE to develop a spin-off that plays like its Arcade antecedents but is an entirely separate game in its own right. The game was also ported to MSX home computers. It would later find its way onto the Wii Shop's Virtual Console, where it first became available to audiences in Europe and the US.

JaJaMaru would be featured in many more games down the road, mostly for the Famicom but occasionally for Game Boy and other systems. These include Jajamaru no Daibōken, Ninja Jajamaru: Ginga Daisakusen and Jajamaru Ninpō Chō, which is a Dragon Warrior-esque JRPG.

The first two "Ninja Haggleman" fake games from the Retro Game Challenge DS game are based on Ninja JaJaMaru-kun to some extent. The third Ninja Haggleman is instead a deliberate homage to Ninja Gaiden. 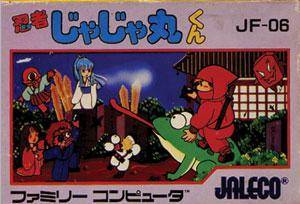