Portal is a comedic first-person puzzle game in which the player has to escape through a series of test rooms at the behest of a shadowy research facility and a calm but ominous computerized voiceover (GLaDOS) that alternates between helpful advice and dispassionate comments about the danger of the facility and the expendability of the player character (a mute woman named Chell) to the experiment.

The game uses a first-person perspective but is not an action game, per se. The player is instead attempting to get through each test chamber using their wits and various objects and fixtures in the environment, each of which has its own application. While short in length, the game is packed back-to-front with the core puzzle gameplay and conveys all its information incidentally through context clues, like posters and graffiti, and voiceover while working towards the game's goals.

Portal was originally released within Valve's The Orange Box compilation, which also included Half-Life 2, its two "Episode" expansions and Team Fortress 2. Like Team Fortress 2, it was also made available separately at a later date. It was followed by a bigger sequel in 2011: Portal 2.

Portal casts players into the role of Chell, a human lab rat who awakes to find herself in the Aperture Science Enrichment Center where she is instructed by GLaDOS (Genetic Lifeform and Disk Operating System) that she is to take part in a series of tests. The warnings and general instructions GLaDOS provides Chell as she approaches each new test chamber provide the information she needs to complete each test while also creating atmosphere and further developing the personality of the AI as the game progresses. She is given a weapon called the Aperture Science Handheld Portal Device, which can be used to create portals.

As the test progresses, the difficulty of each level increases and the motives of GLaDOS become more clear as Chell comes across the remains of previous test subjects while GLaDOS's comments become more sinister and less caring than before; one bit of graffiti in the facility states emphatically that "the cake is a lie," referring to the cake offered as incentive for completing the tests. At one point in the game, Chell is introduced to the Weighted Companion Cube, a simple cube with a pink heart logo on every side, which she must use to complete a test before being told it must be destroyed. It's at this point the game becomes more difficult with the introduction of live fire turrets which can kill Chell should she stand openly in range of them.

After finishing the final chamber Chell is praised by GLaDOS for coming this far but she must be destroyed, forcing Chell to escape from the approaching furnace, deeper into the facility. It's at this point she realizes that there is no staff in the building. Following signs from what is possibly a previous test subject, she makes her way toward GLaDOS. The game becomes slightly more difficult in that point, because there are no more clear entrances or exits for Chell to use. So it becomes a matter of trial and error to find out which way to go. All the while, GLaDOS's comments become increasingly erratic with her mood and speech changing randomly as she tries to persuade and threaten Chell from proceeding.

Eventually, Chell enters a chamber, where a large computer AI system is hanging from the ceiling, and it is revealed that GLaDOS was in fact a computer all along. The morality core breaks and falls away from GLaDOS, who explains it was installed after she flooded the facility with a poisonous gas killing everyone and now she can do the same. A countdown timer starts, indicating how long until the facility is filled with poisonous gas. GLaDOS proceeds to fire rockets at Chell, who must use the Portal Gun to redirect the rockets toward GLaDOS. Each time one hits her, another piece of her hardware falls off which the player must retrieve using portals, then throw into the incinerator.

Once every piece has been destroyed there is a portal malfunction causing everything in the room to be transported outside, where Chell is finally free. Originally, this is where the game ended, however a patch that was released on March 3, 2010 added more to this scene having a robot thank Chell for assuming the correct party escort submission position and slowly drag her away as it fades to black. Just before the credits roll, a scene unfolds, where the Weighted Companion Cube is placed beside a large cake suggesting that the cake wasn't a lie after all.

The Aperture Science Handheld Portal Device, or "Portal Gun" for short, allows players to easily traverse any distance instantly, so long as two portals bridge it. When the player (or any object for that matter) passes through one of a pair of portals, it instantly emerges from the other, with its orientation and momentum preserved relative to the portal. This law of conservation of momentum, which GLaDOS memorably introduces to the player as "speedy things goes in; speedy thing comes out," serves as a key gameplay concept. The most common application is the gravity sling, in which the player jumps from a significant height, relying on gravity's constant acceleration to reach high speeds, before falling into a portal on the ground, and then being "flung" at the same high speed out of the complementary portal, often placed high on a wall. Through use of this technique, the player is able to fling him- or herself over hazards and barriers, which is essential to solving many of the puzzles in Portal.

Physics also play a recurring role in Portal's gameplay. One example of this is the oversized red buttons ("1500-Megawatt Aperture Science Heavy Duty Supercolliding Superbutton") on the ground, which the player frequently encounters. These buttons are activated when an object of sufficient mass, such as a cube or the player character herself, is positioned on top of the button. When a button is activated, it triggers an event in another object in the environment with which it is associated, such as opening a door. In most puzzles that include these buttons, cubes can also be found. The player can carry, throw, and drop cubes, including through portals, and must frequently do so in order to get cubes onto buttons that will open paths to facilitate the player's progression in the game.

Another example of physics as a gameplay element in Portal is the bouncing energy balls that player encounters in many of the game's puzzles. These energy balls are emitted from an origin point and have a lifespan of approximately 15 seconds. Only one per origin point may be in existence at a time, and once one has expired, its origin point emits a new one. The energy balls travel strictly in straight lines, bouncing off of any inclined surface according to the laws of reflection. The player must additionally beware of these energy balls, as any contact with one is fatal. At the same time, the player must often redirect the path of an energy ball using portals in order to direct it into a repository, which triggers necessary events, like buttons.

In addition, Portal includes advanced and challenge maps, consisting of Chambers 13-18 from the story campaign with modifications. The advanced maps are modified to be harder by reducing the number of possible solutions so that only the more difficult one(s) remain viable, or making the existing objective more difficult to achieve. Challenge maps are played under one of three minimization goals: time, steps, or portals created. Bronze, silver, and gold medals can be earned for completing each map in within a certain limitation threshold.

Portal also includes a developer commentary mode, which plays as the regular games does, except that nodes, each with an associated audio clip, are sprinkled through 11 of the 19 chambers, and the player may freely skip to any chamber containing nodes. In the audio clips, many of the Portal's designers provide insights into the level design, art direction, audio production, and technical challenges, among other issues that they grappled with while making Portal.

As with the other games in The Orange Box, Portal includes achievements, which count towards the player's Xbox 360 gamerscore on that system, or Steam's own private achievement system on the PC. The two platforms' achievement sets are functionally identical.

A patch was released with the notes "Changed radio transmission frequency to comply with federal and state spectrum management regulations". Players noticed the addition of a radio to each level. These play a part in the new achievement “Transmission Received”. These radios can receive a coded message; morse code, SSTV encoded images, hidden equations and mysterious sounds. Lead many people to discover a BBS line asking for authentication. The cjohnson credentials allowed streaming of ASCII images. Many believed this to elude towards a Portal 2 or Half-life 2: Episode 3 announcement. The end cut scene has been modified to solidify the return of Chell in the future. Portal 2 was later announced in the April issue of Game informer.

One of the most famous features of Portal, the game's ending credits are accompanied by the song 'Still Alive'. It was written by Jonathan Coulton - a singer/songwriter who sometimes makes references to games in his songs - and performed by Ellen McLain, the actress who provides the voice for GLaDOS. McLain maintains the same mechanical tone of GLaDOS' character for the song, which enhances the humour value. "Still Alive" was released as a free downloadable track for Rock Band on March 31, 2008, and can also be heard on the Aperture Science Enrichment Center MySpace page; it has also been performed onstage by Coulton, most notably with Felicia Day (The Guild) and Leo Laporte (twit.tv) at PAX 2008.

Before the release of Portal, the website aperturescience.com was discovered. The website contains a text prompt, similar to DOS operating systems. Typing "login" or "logon" will prompt the user for a username and password. Any username will give access if "portal" or "portals" is entered as the password. Once logged in, the user can access an application form consisting of a long series of questions. Many of these questions seem odd and/or reference cake.

During the questionnaire, certain letters will be blinking. Typing out these letters gives "thecakeisalie". Entering this when logged in or after finishing the application will give the player a message from an employee of Aperture Science and a video feed of the holding cell where Chell starts in Portal.

During Portal, the words "login: cjohnson password: tier3" can be found scribbled on a wall. When logging into the website with this info, the player gets access to a history of Aperture Science. The company was originally founded by Cave Johnson as a manufacturer of shower curtains. At some point, Johnson went crazy, believing that time had begun flowing backwards, and had a team develop a "reverse Heimlich maneuver." 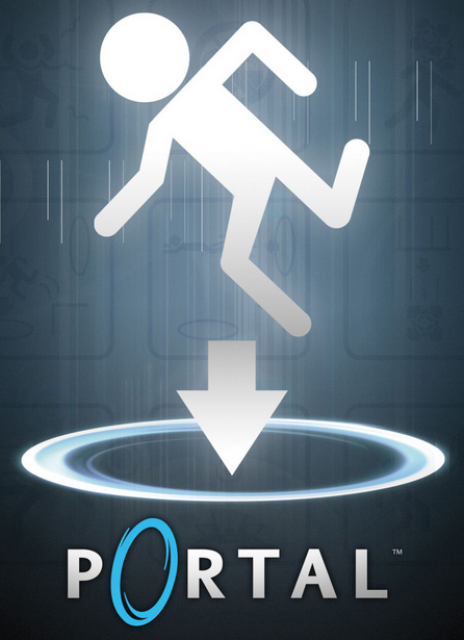