Battlefield Heroes is EA DICE's casual take on the Battlefield series. It features a cartoon-like graphical style and is played from a third person perspective. It is also a "Play 4 Free" game.

Battlefield Heroes was the first game in what EA claims to be part of a " Play 4 Free" series. The game went on general release June 25, 2009 after an extended beta period. The game client download is free, however there is some paid content in the form of microtransactions (i.e. alternative costumes and game tweaking widgets such as an XP boost). The game currently has 4 maps, but the developers stated in an interview that if the game proves itself to be successful more maps will be available.

Heroes will feature "famous battles" with modifications making them less violent. Some have speculated that this is so that the game receives an E/12 rating and therefore can have a potentially wider target audience. The developers stated that the game is laid back, with focus on fun rather than intense competition. Battlefield Heroes features 3 classes, which some skeptics find to be awfully similar to a handful of the classes that exist in Team Fortress 2.

Due to the great changes to the economy in the November 2009 update, EA has been widely criticized in the media as well as on their own forum for breaking their free-to-play formula, inflicting severe disadvantages upon the non-paying part of the community. According to Ben Cousins, EA, these changes are likely to be permanent.

The gameplay in the game is a mostly standard 3rd person shooter. There is no cover system and the game is rather fast paced in keeping with it's casual kitsch styling. Along with paid content, the game features a "valor point" system whereby players gain points through combat to spend on special weapons and attributes to improve their characters. As this is not paid content it attempts to alleviate balancing issues. Players start with 4 character slots, not enough to have a character of each type for both teams, however more can be purchased with 140 Battlefunds, which equates to $2.

Planes, tanks and Jeeps are controlled just as they are in other battlefield games in the franchise, DICE has stated that they simply "cut-out" the planes and vehicle control from the other games and pasted them at BF:Heroes.

Has medium health at 120 and speed, can heal allies and has the 'Grenade Spam' ability.

Highest health at 150 but lowest speed, uses high power miniguns and has the 'Frenzy Fire' ability. Also is the only class with access to RPG's.

Has the lowest health at 80 but the highest speed, uses sniper rifles and stealth abilities that include becoming invisible and sometimes fully disappearing. The only class with a melee (knife) attack so far. The commando can also buy a pistol, making the class a bit more usable in close combat fights.

There are currently 8 maps available in Battlefield Heroes, each of which varies in setting and gameplay style.

Transports up to three players with one driver and two passengers, passengers can fire their own weapons (including snipers).

Fires a powerful mounted cannon and can transport one passenger in the machine gun turret on top of the tank and one driver. The passenger can fire their own weapons, and hide within the tank by ducking.

The only air unit so far, transports up to two passengers sitting on the wings of the plane and one driver. The driver can fire a machine gun while the passengers can fire their own weapons.

One man operated immobile turret, does heavy damage to planes and weak damage to anything else.

Players can choose to try to take on an incomplete badge. The badges are in a mission style and can be picked in any order. When the player completes that task, they unlock the badge for that achievement. The more these achievements are completed, the players's level will increase. The players level will also increase by playing the game normally. Points earned by increasing your level can be spent in the game's store to buy better weapons and clothing.

The level cap is currently level 30.

When ever a player goes up 2 levels, a player gets a Hero Point, which can be used to get new abilities or improve on existing ones.. These abilities help players by increasing their health or making their weaponary more powerful. Known abilities as of this time include, Blasting Strike (Throws any nearby jeeps, tanks and infantry into the air), Grenade Spam (15 grenades can be thrown at once), Life-Boost (increases the player's health), I Eat Grenades (absorbs a grenade's damage and heals the player), and 6th sense (allows the player to see through walls). Every ability can be made more useful by means including lasting longer, inflicting more damage, or refreshing longer, by adding more Hero Points.

Every Hero in the game can be customized. The player selects the Hero's name, faction, class, skin colour, hair and facial hair. Ten parts of your Hero can be changed, face, head, neck, body, chest, accessory, hands, legs, feet and waist. Each character in the game will be unique, (unlike Team Fortress 2's set class design). Each class in the game differs what kind of clothes you can pick. The Commando class wears has short sleeved jackets and long sleeved with long slim trousers and berets. The Gunner class wears large bulky jackets, bulky trousers and large helmets. Finally, the Solider class has long jackets, semi long trousers and light helmets.

Default weapons for all three classes are low quality but have no timer attached. All the other weapon choices are varied with damage, rate of fire, and range stats so you can customize your style of play. However, everything from handguns to grenades to machine guns that you buy with the in-game valor points (won through missions, playing for a period of time, and leveling up) will have either a one month or seven day timer. Each class only has access to the specific types of weapons that they specialize in, and pistols, which no class has as standard equipment. Though they may look different and have different names, weapons are identical between factions. For example, the National "the Gourmet" sniper rifle is exactly the same as the Royal "Oscar's Farshot" sniper rifle. Furthermore, you can only bring two weapons and one explosive with you into the game, so you have to plan your purchases and load out accordingly.

After a long closed beta phase, which began May 6 2008, and the game being delayed until early 2009, DICE announced in January 2009 on Battlefield-Heroes.com that the first open beta sign ups were now open, operating on a "first come, first served" idea. On June 2009 the closed beta test ended, the game was then announced to be in open beta allowing anyone with an EA account to sign in and play. 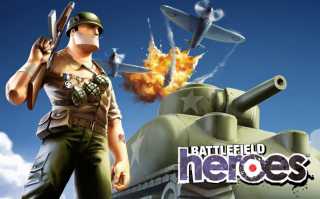