A side-scrolling shoot-em-up developed by Data East and ported to numerous home computers, based on the 1987 Verhoeven movie.

RoboCop is a licensed sci-fi side-scrolling shooter based on the 1987 movie about the titular cop cyborg. It loosely follows the events of the movie, pitting RoboCop against gun-toting criminals and the ED-209 bipedal robot.

The original Arcade game was developed by Data East (though some sources also say Nihon Bussan) in 1988 and ported to numerous home computers in the US and Europe. Most of the European releases were handled by Ocean Software. Japanese developer SAS Sakata developed the 1989 NES port. The Commodore 64 and Game Boy versions of the game are subtly different from the rest, featuring a different plot unrelated to the movie, but still contains similar gameplay. Music from the Game Boy game, composed by Jonathon Dunn and based on the C64 soundtrack, was used in an European TV advert for the kitchen appliance company Ariston.

Data East and Ocean Software would go on to produce sequels that looked and played similarly, based on the movies RoboCop 2 and RoboCop 3 and the 1992 Dark Horse comic book series RoboCop Versus The Terminator. 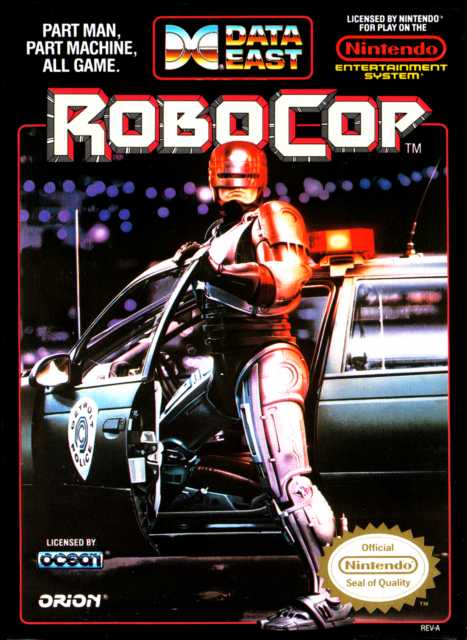