Prince of Persia: The Two Thrones

The Two Thrones is the third game and supposed end for the Sands Of Time saga. It follows the Prince's quest to finish the corrupted, power-hungry Vizier and his negative parts of his mind.

The (at the time) final game in the Sands of Time series. The Two Thrones returns to the more light-hearted tone of the original Sands of Time, including Yuri Lowenthal reprising the role as The Prince, as a reaction to the negative reception to Warrior Within's grimmer aesthetic.

The gameplay in The Two Thrones was tweaked a bit. It sports a few new features, primarily in combat. If The Prince stealthily sneaks up on an opponent, he can perform a 'speed kill'. A minigame of button pressing that will down the enemy in one blow. If the game is failed, The Prince must battle the enemy.

Another new feature is the Prince's split personality. Affected by the sands of time, The Prince will transform into The Dark Prince, a black being corrupted by the sands of time. As the Dark Prince, players get a new weapon known as the Daggertail, a chain-like blade. Also, the player continually loses health, which he can replenish by collecting sands from fallen foes, or by stepping into water to revert to the Prince.

A chariot racing minigame was also added. Players must avoid crashing into walls, while fending off enemy chariots and soldiers who jump on to your vehicle.

The Two Thrones continues right after the true ending of Warrior Within. After killing the Dahaka and altering Kaileena's fate, he boards a ship to return to Babylon. As Babylon nears in site, the Prince is horrified that the city is burning and being torn apart by war. His ship is attacked and the pair is thrown overboard, and Kaileena is captured upon reaching shore. The Prince must go on one more adventure to thwart the Vizier and his army sand monsters from becoming immortal and destroying all of Babylon.

Ubisoft Montreal stated that they wanted Prince of Persia: The Two Thrones to be a blend of the two previous titles (Sands of Time was light in tone while Warrior Within was much darker in tone).

A censored version was later released in North America that removed decapitation.

On the Pause Screen enter the following code: 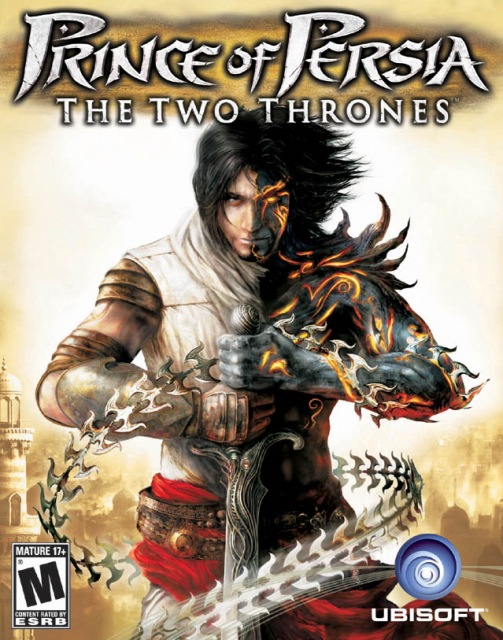