Nanostray 2 is a sequel to the DS shoot-em-up Nanostray released in 2005. It features improvements over it's prequel such as a new weapon system, enhanced touch controls, and unlockable minigames. It is developed by Shin'en Multimedia and published by Majesco.
Nintendo DS

There are 6 subweapons collectable throughout the game. Once unlocked, players can use them at any time in Arcade Mode, but in Adventure Mode the player has to unlock them all over again in order to use them. They are:

Pulse
-Energy Usage: 1.6%
-Power: Low
-The Pulse fires a straight beam of light in front of the SHN-fighter, perfect for a long range assault. Deals small amounts of damage at a time.

-Energy Usage: 25%
-Power: High
-Like the name implies, the Seeker fires two beams to target any enemies on screen and seek them out. Its heavy damage is a plus, but it consumes a lot of energy.

-Energy Usage: 7.1%
-Power: Low
-The Raydion creates an electrical 'shield' persay around the SHN-fighter that deals damage to all nearby enemies; unfortunately, its not actually a shield — the fighter can still get hit.

-Energy Usage: 17%
-Power: High
-A bomb that is fired not too far away from the SHN-fighter. Deals high amounts of damage and can hit multiple enemies at once.

-Energy Usage: 12.5%
-Power: Middle
-Explosives that, after fired, are attracted to nearby enemies. Multiple mines can be shot at once.

-Energy Usage: 12.5%
-Power: Middle
-A chain lightning weapon that, after fired, jumps to the nearest enemy and that jumps on the the next as soon as possible (repeats the process afterwards). Hard to aim at specific enemies and hard to control, but redeems itself in dealing good damage to massive amounts of enemies.

Competitivegameplay obviously in mind, Shin'en put the Nano Gauge into the franchise. It maxes out after hitting an enemy, but will run of out of energy within a second if no other enemies are blown up in that time. Keeping the gauge at a constant high level will increase the scores players get for destroying enemies. The Nano Gauge adds a sense of strategy and skill to the mix and makes the Wi-Fi leaderboards extremely competitive.

There are three types of control options in Nanostray 2 — classic, touch screen and lefty touch screen.

controls utilize the d-pad to move your fighter, while A is used for shooting and B is used to fire subweapons. This is the default control option.

controls utilize the touch screen to move, the d-pad to fire and L to shoot subweapons. Touching the ship on a certain point will customize where your second and third bullets fire. While this control scheme has been noted to be much more accurate, the problem remains that it is hard to see what is always going on with the player's hand in the way.
Lefty touch screen is similar to touch screen, only reversed.
Ship Speed
Before each level, players can select what speed they want their ship to fly at — one, two or three. This is essential to competetive play.

Multiplayer is available with only one cart, but you get more options with two.

-All of single cart's modes.
-Adventure mode co-op, with each player only in possession of two satellites and no subweapons.

While the majority of sources received Nanostray 2 well, some felt that repetition and lack of imagination brought the title down. All sources however noted that it was the only shooter available on the DS, making it top tier in the genre for the system. It sports a moderately successful 75% on Metacritic and 76% on Gamerankings.
Aegis Wing AEGIS: Guardian of the Fleet Galaga Nanostray Gyrostarr Astro Warrior Contra 4 Big Bang Mini Underwater Attack 19XX: The War Against Destiny Iridion 3D Iridion II G.G Series Wonder Land 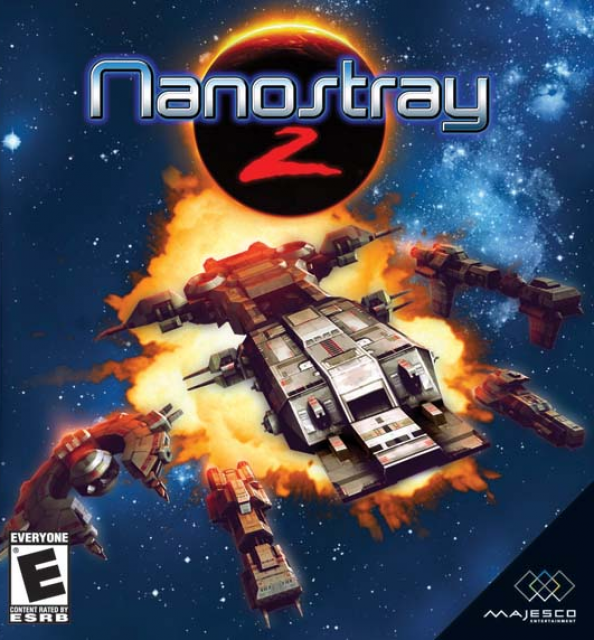