ArmA II: Ultimate Military Simulator is, as the title would suggest, a Military Simulation game developed by Bohemia Interactive. Experience the intensity of lifelike combat situations in one of the most realistic soldier sims available.

ArmA 2 is the sequel to Armed Assault, a realistic war game developed by Bohemia Interactive, the same company that developed Operation Flashpoint: Cold War Crisis. ArmA 2 is a hardcore military simulator that allows the player to carry out the many different roles soldiers in combat zones must occupy. The game takes place in the 225 square-kilometer fictional ex-soviet state of Chernarus where a bloody conflict is taking place.

ArmA 2 features a player-driven, branching campaign in which your actions have consequences. You can choose to win the hearts and minds of the warring factions inside Chernarus, or play them off against one another. Your choices will shape the future of the country, allowing you to ultimately decide which faction (if any) survives to rule. ArmA 2 puts a vast array of military hardware at the player's disposal, 73 modern weapons, 167 vehicle variants in the air, on land and at sea, all modeled on their real world counterparts. The game world features real-time day/night cycles, dynamic wind, weather and environmental effects, as well as dynamic civilian settlements and wildlife bringing the game world to life. ArmA 2 also contains an in-depth scenario editor, allowing the player to create their own missions and play them out as they like.

Bohemia Interactive stated that the game will feature "role-playing elements" that revolve around the factions. For instance, if the player decides to destroy local homes, the local citizens may become angered and give the enemy information about you. Likewise, if you help the locals, they will in return give you information about enemy positions.

This is the faction the player character belongs to. The US deployment in Chernarus is made up of the 27th Marine Expeditionary Unit (Special Operations Capable), with the player being part of Team Razor.

The military force of the Chernarus's government. Their troops have been trained by Western armies, but are equipped with weapons and equipment of the Soviet Army, its direct predecessor.

Russian presence in Chernarus is there as a peacekeeping force consisting of the elite Guard Motor Rifle battalion, reinforced by armor, artillery and attack helicopter detachments.

Chernarussian Movement of the Red Star

The ChDKZ has its roots as an underground communist movement, but has grown to become a conventional force with military structure and weapon platforms captured from the Chernarussian government or provided by international arms dealers.

Nationalist guerrillas of the National Party is an underground movement. While not as heavily armed as the other factions, the Nationalist knowledge of the country, military expertise from civil war and underground network make them serious opponents to both the ChDKZ and CDF.

In Chernarus, civil war has raged for two years after a long period of political instability, caused by conflicts between a pro-Western coalition and communist-nationalist Chernarus Red Star Movement (ChDKZ, „Chedaki“). After ChDKZ was defeated by the democratic wing in the 2008 elections, tension escalated during the so-called September Crisis. With wide support from ethnic Russians in the Northern Province of Chernarus, insurgents attempted to reunite Northern Chernarus with Russia by force, but were defeated in the counter-insurgency operation "Northwind“. By the summer of 2009, remaining insurgent troops retreated to hideouts in the northern mountains.

In the autumn of 2009, "Chedaki" surprisingly launched a major assault on government forces, led by infamous supreme warlord, nicknamed Akula ("Shark“). In a few weeks insurgents seized most of the Northern Province, and declared independence from the Chernarussian government. After negotiations to join Russia resulted in dismissal by Moscow, insurgents installed their own government and declared martial law, continuing to advance to the western part of the country. Government forces suffered heavy losses and the situation became critical. Alexander Baranov, the prime minister of Chernarus, asked NATO forces to assist in restoring peace and order in Chernarus.

NATO alerts its rapid reaction forces in the Euro-Asian theater. It is decided to send the US Marines to the area to prevent further civilian casualties in the ongoing conflict between the various factions inside Chernarussia. A Marine Expeditionary Force, based off USS Khe Sah, is deployed to take control of the situation.

There is huge variety of weapons and equipment in ArmA 2, all of which are real and used by modern military forces. Ranging from the smallest handguns to the largest pieces of artillery, each are realistically modeled after their real life counterparts and behave as they should with accurate ballistics, sounds, animations, etc. Some weapons have the ability to add accessories, including collimator sights, optical sights, grenade launchers or silencers.

Like its predecessors Arma 2 boasts a dedicated modding community that lengthens the game's lifespan dramatically. Bohemia Interactive caters to their modding community by making the game easily accessible for custom content creation and usage. They even added an easy to use in-game mission editor that allows you to make anything from quick 5 minute skirmishes to huge battles that span the entire map.

For Arma 2 the modding community is essential to enhancing your gaming experience. Popular overhaul mods like Advanced Combat Environment (ACE) make the game strive for even more realism than it has by default, boasting features such as; enhanced AI, tear gas, realistic sounds, realistic explosion effects, new weapons, new units, new vehicles etc. Also dozens of user made SP and MP missions are already released with many more in development. In fact some of the most played MP missions are actually user-made missions like Domination and Evolution. 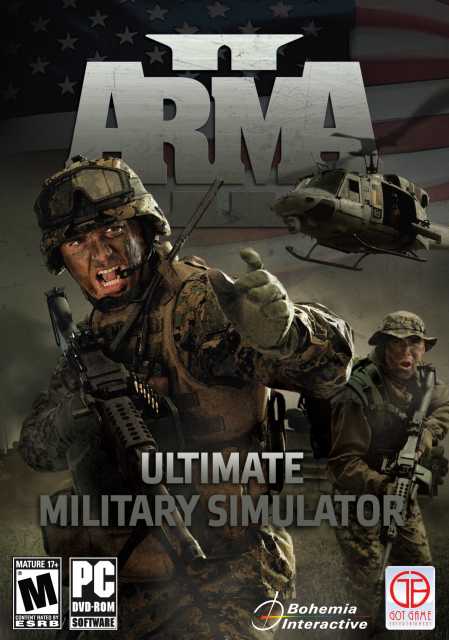