Zoombies: Animales de la Muerte is a tower defence game which pits two kids against a horde of undead animals in a Mexican zoo. The game was originally going to be a twin-joystick shooter with a Mexican theme.

Zoombies stars two children who are visiting a Mexican zoo on a field trip. While there, a virus breaks out, infecting the animals and turning them into zombies. Oddly enough, the zoo was prepared for such an occasion. So it's up to the children, with an arsenal of weapons at their disposal, to eliminate the zombified animals (the titular "zoombies") while keeping the healthy ones safe.

In Zoombies, the boy or girl you play as are locked in a fixed position as you draw a line to create a path for their weapon to follow. After the weapon reaches the end of the line, it would return to the kid. In order to pass a level, no more than three zoombies are allowed to get past your character along with making sure a certain number of healthy animals did. There are 45 levels spread across three areas.

The original, unreleased version of Animales de la Muerte was going to be a twin-stick style shooter, similar to Smash TV and Alien Syndrome, except with an uncomfortably stereotypical Mexican theme. Players had an arsenal of weapons to pick up and use to shoot the zombified animals. As you progressed through the levels players would have to capture and save any unaffected animals with a net. This version of the game was planned for release on Wiiware, Xbox Live Arcade, Playstation Network, and PC, but it ended up getting cancelled and reworked into what is now Zoombies. 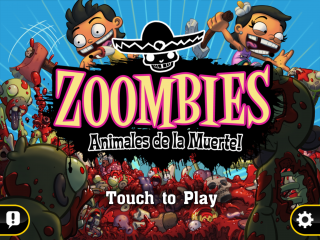