Carrier Air Wing, known as U.S. Navy in Japan, is a side-scrolling shooter released in 1990 for the CP System arcade hardware by Capcom.

Carrier Air Wing is the spiritual sequel to U.N. Squadron and follows up with more of the same side-scrolling shooter action.

However, unlike U.N. Squadron, Carrier Air Wing was never ported to any console.

There are three different jet fighters available to the player, each with it's own speciality.

The old commander who briefs the player on each levels boss resembles Sean Connery. 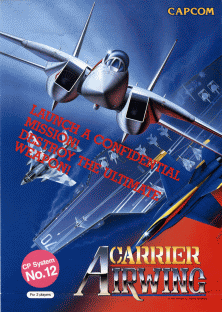