Final Fantasy Type-0, formerly Final Fantasy Agito XIII, is an RPG for the PSP. The PSP Version was only available in Japan, but an Xbox One and Playstation 4 version was localized for North America & Europe.
PlayStation Portable

Final Fantasy Type-0 is an action RPG developed and published by Square Enix for the PlayStation Portable.The game was released in Japan on October 27, 2011 but due to the decline of PSP market in the West that version was never released for other territories. Director, Hajima Tabata, mentioned several times that he hoped to someday release Type-0 outside of Japan but after several years of waiting a group of fans began creating their own translation in 2013.

Lead by a Spanish hacker known as Sky, the group released their unofficial English translation on June 8, 2014. Two days afterward, Square Enix announced Final Fantasy Type-0 HD an HD version of Type-0 for PlayStation 4 and Xbox One, with this version being localized and released in North America and Europe (along with its companion game Final Fantasy Agito). On July 18, 2014 the fan translation patch was taken offline due to Square-Enix sending a cease and desist to the team.

A TGS 2010 trailer and gameplay info the game is familiar and will feel at home to old Final Fantasy players.

The game is mission based, kind of like a bunch of quests and seem to be non-linear, which not a lot of Final Fantasy games do. There will also be sub-missions that can be accomplished mid-battle. The trailer also revealed that you will be able to ride chocobos, like all Final Fantasy games should allow, or fly in an airship on the world map to get around. The game seems to be the most free roam based final fantasy game that is not on of the MMO's of 11 or 14.

The ATB system that was later altered into the ATB Kai system in Final Fantasy X-2 and later refined again in Crisis Core is now being refined again in Type-0 but unlike Crisis Core it will be party based. It plays like Final Fantasy XII as well with the fact that whoever is the leader in the party are the ones that are playable. Summons also return but they are back to Final Fantasy X status of Aeons, where the summons themselves are controllable and have their own growth and attributes. Speaking of summons, Odin has been one of the summons confirmed to be in the game thanks to an official screenshot. Looks to be summon-able by Ace. Shiva is also a confirmed summon-able aeon in the game thanks to a trailer. In battle enemies have been said to have weak points that can be targeted in battle. In this case this weak point can be used to deal a death blow to an enemy causing an instant kill.

Students of Suzaku can summon Ifrit a popular fire summon in the final fantasy series. They can also summon Golem a rock spirit. Odin from older final fantasy games has been confirmed as one of the "War Gods."

In Type 0 Summons are called "War Gods" but, this time around instead of expending MP, the cost of nothing or filling up a meter to summon creatures, this time around you have to sacrifice one of your own characters to bring them out.

There seems to be a list of free missions one can take for extras in the game.

A black haired young male, that uses 2 Volt rapiers in battle. Machina can easily rack up a 10 hit combo with his sabers, including his Spin Drive ability that damages enemies within a radius.

A brown haired young woman that uses a pair of dual daggers in battle and can also cast magic like the others. Rem uses a mix of strikes and magic in battle with her daggers. Her special attack, Aspir Venom, does damages from enemies and saps them of their MP.

Machina and Rem are said to be the main protagonists of the game.

Like the Aces in playing cards, he was originally going to be named just "Card" but since the entire cast is now based around playing cards, except Machina and Rem, it was changed. His weapon is Tarot cards.

Playing Ace is almost a game in itself. He has an ability called deck open which allows him to draw 4 new cards and depending on the cards he can heal or enhance abilities of other party members. He can also throw cards at close range or a distance.

Trey is Italian for "three" so that explains his name. His weapon is a bow and arrow.

Italian for "five", she is armed with a mace.

She is armed with a chain whip.

He only fights using martial arts, only his legs in particular.

He is armed only with a Spear that has a red tip. Nine is the dragoon of the group. He can spin and damage enemies in a circle. He also has a jump ability like Freya from Final Fantasy IX that damages enemies from the sky by landing on them.

He uses a katana as his main weapon.

The one with the glasses that uses a saber and has a fencing style and uses a lot of acrobatic moves in combat. Her attacks are easily chain-able, she even has an ability called "Cross" that hits enemies in a line.

He uses dual pistol as his main weapon.

Who seems to be known as the "Ice Blade of Death" and is the instructor of these students and is not featured in the picture above and apparently uses a Tonberry in battle. Not a playable character though.

These characters have just been released as of April 25th 2011, the 3rd characters name has not yet been romanized into English.

The world of Type-0 is called Oriens and is broken up to 4 regions each powered by a crystal. (Crystals have for years been a staple in Final Fantasy universes, and typically their purpose powering stuff. If the crystal breaks usually that place is screwed.) The names of the 4 regions are as follows: Rubrum, Milites, Anaze, and Kogai. [I don't think the names will be changed much if at all later.] These 4 regions are surrounded around a magic school called "Peristylium", specifically in Type-0 it will focus on the Rubrum Peristyilum Suzaku Magic academy, which is on an island not attached to the main land of the continent.

A pact/treaty of peace called "Pax Codex" was signed between the nations where the crystals are located. Under the command of High Commander Cid Oldstien, (Final Fantasy sure loves their Cids) Byakko breaks said peace treaty and begins an assault on other nations in airships and L'Cie with magical armor. He (Cid) manages to take over all the nations except Suzaku because of their strong resistance. Byakko does manage to disable the crystal's power though and tries to convince the Rubrum president to lay down their weapons and surrender because without the crystal the nation is pretty much without power and can't defend themselves. 12 students some how managed to keep their powers with the crystal pact (I am assuming this crystal pact is what one needs to do to get their magic powers in the first place and if the crystal goes down or becomes disabled they cant use them but, this is different for these 12.) and plan to stop Cid's hostile take over with an operation they have dubbed "Operation Apostle" to take down his forces.

Type-0 was originally entitled Final Fantasy Agito XIII, and was intended to be a part of Square Enix's Fabula Nova Crystallis sub-series of games set within the universe of Final Fantasy XIII. It was also originally developed as a cell phone game due to the popularity of Before Crisis, with functions only available on cellphones, but development shifted to the PSP in hopes of broadening the game's audience. Another reason for the shift was that Square Enix wanted to release the game for a more powerful platform.

At a Square Enix event held on January 18th, 2011, it was officially announced that Final Fantasy Agito XIII was being renamed Final Fantasy Type-0, a title with the intent of becoming the starting point for a new franchise. The game has been completely separated from Final Fantasy XIII's story and world, and is now set within its own original universe. At the same event, it was also announced that Type-0 would ship on two UMDs due to the large amount of voice acting in the game with over thirty speaking parts.

Final Fantasy Type-0 HD is a remake of the PSP game Final Fantasy Type-0 for the Xbox One and PlayStation 4. Due for release on March 17, 2015, it is the first version of the game be localized for official release outside of Japan. In addition to the graphics upgrade, the game difficulty and mechanics are also being tweaked to allow for multiple difficulty levels. The game will also allow the player to choose between Japanese and English voice acting. 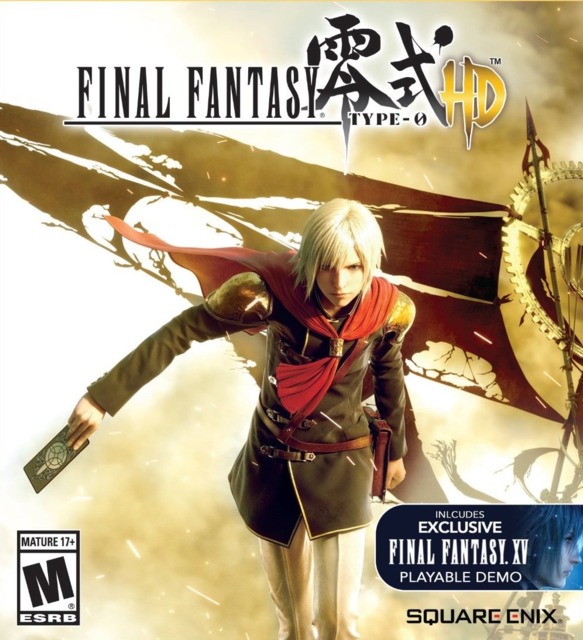