TwinBee is a 1985 shoot 'em up that, after originally being released to arcade, was released on numerous platforms including the Nintendo Entertainment System. It is the first game in the Twinbee series of games that includes both shoot 'em ups and platformers. It has been rereleased most recently as a "3D Classics" title for the Nintendo 3DS.

TwinBee is a vertical scrolling shoot 'em up that is unlike any others during the time. Instead of "gritty" alien and military plane shooters, Konami decided to make a very cutesy shoot 'em up that retains all of the fun of others in its genre, but paints it with a thick coat of famed Japanese cuteness.

TwinBee has fairly typically shoot 'em up gameplay. The player is in an anthropomorphic ship named Twinbee, scrollings upwards and shooting enemies. It is all in the visual design of the game that makes it different. The game has very bright colors and everything is designed in a very cartoony manner.

Levels are structured in a standard shoot 'em up manner. The player flies through an area and at the end has to fight a larger boss ship.

There are a number of collectibles in TwinBee that will either give the player points or power up Twinbee.

Throughout TwinBee, while juggling the bells awards points, they can also be hit to change their color between a flashing red, pale blue, and white. Collecting these bells during this event causes different power-ups to be applied to the ship.

Be careful, hitting a bell too many times can destroy it and lose any points that could be earned.

Throughout the game Twinbee fights a number of regular household objects including flying vegetables and flying kitchen utensils. The basic ground enemy resembles an animated pine cone. Twinbee has to fight boss enemies at the end of each level that often look more like a airplane/spaceship. 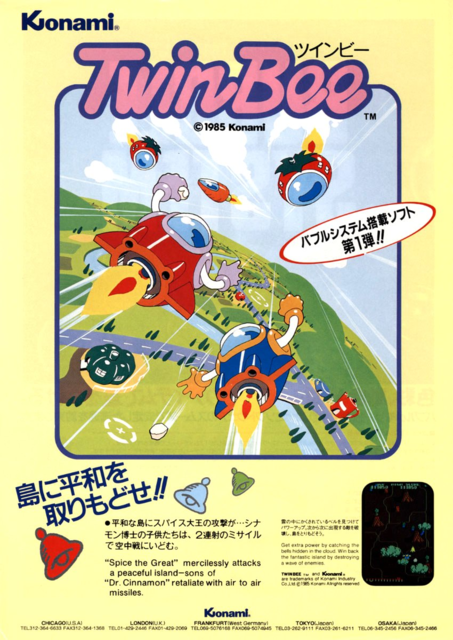