A fast paced 2D sidescrolling action game.The players takes control of multiple characters in an attempt to take down the evil Darns.

Noitu Love 2: Devolution is a 2D Platformer developed by Konjak for PC in 2008. In April 2010, Golgoth Studios announced via Facebook that they were in the midst of collaborating with developer Konjak to bring Noitu Love 2 to WiiWare but the port eventually got canceled. In December 2015, Konjak announced that they'd partnered with Danish developer MP2 to release the game as Noitu Love: Devolution (dropping the 2 from the title) to the Nintendo 3DS and Wii U eShops, utilizing the touch controls of both systems to recreate the unique mouse controls of the PC original while also supporting Wii Remote and Nunchuk with pointer controls in the Wii U version.

The game revolves around main character and female bad-ass Xoda Rap in the year 2288, solving the mystery of Darnacus who has tried to turn all humans into monkeys for two entire centuries, only to be foiled by Noitu (the first game's main character).

Noitu Love 2 focuses on using the mouse as a lock-on and targeting device, with WASD and arrow controls while the mouse is used for firing and dash attacks. The game takes on a semi- platformer feel, but not fully indulging in it by placing small puzzles integrated into the creative level designs. What makes Noitu Love 2 different from most 2D Platformers though is its engaging boss fights; for example the boss fight with O2 Joy involves stepping on piano keys to hit the boss before he can strike with one of three different attacks.

Noitu Love 2: Devolution begins with Xoda Rap standing in her apartment while Mr. Almond gives her the news that the entire city is being attacked by robot. She starts moving forward, but notices a robot using a flying vehicle aiming at her through the windows. She quickly runs and escapes, though just barely.

After the first stage and defeating the first boss Mordecai Fluke, a robot in a giant boat with wheels, Xoda encounters Doppelori, a robot. Doppelori quickly escapes and after her Mr. Almond appears, and reveals that Doppelori is in fact a Darn, a robot that used to be controlled by Darnacus, the villain from the first game. After this is revealed, we meet Dr. Tango who tells Almond and Xoda that the entire South District has been "turned into a Victorian block or some such!"

After finally reaching the South District, Xoda discovers that it has all been turned to the past. Almond assumes that Doppelori is responsible for the disaster, but cannot figure out how. After entering a huge tower, Xoda is attacked by a scythe-wielding Darn and must defend herself from minions as the floor falls down the tower.

Once reaching the bottom floor of the tower, she dispenses of the scythe-wielding Darn and continues forward. After climbing another tower and evading fire exhausts, she reaches the top where she meets O2-Joy another boss. She quickly foils his scheme by stepping on giant piano keys that drop the piano hammers onto O2-Joy. '

After reaching level 3, Xoda sees Doppelori fighting Darns. Questioning this, she continue forward, chasing Doppelori throughout the level. Half way through the level, Xoda is met with a water dragon, though she quickly dispatches of it, but is met at top level with Doppelori where they battle. In the middle of the fight, though, they are interuppted by the dragon from before. The bridge where they were fighting breaks, and Xoda finds herself running on a giant water wheel while the dragon follows her, there she finishes the dragon, but Doppelori also manages to escape.

Xoda then takes a flying board and a Combolt Beam to fight enemies and search for Doppelori on flying boards, defeating them all. After flying back to base, Mr. Almond contacts her but before telling her her next mission, he is knocked out.

Xoda is finally contacted by Dr. Tango, and she informs you that the base was attacked but also fully prevented, regretably Mr. Almond was kidnapped as well. Tango gives Xoda the location of Mr. Almond and Xoda continues forward on her flying board to save him. She breaks through a window into an elevator where she fights off wave after wave of Darns until she reaches the top. She pushes forward until a floor crumbles and she meets The Grinning 4. Four Darn bosses that excel at instruments, and using them as weapons. After defeating them, Tango calls in and tells Xoda to hurry.

Xoda finally arrives at Almonds location, but is surprised to see that it is being hit hard by a blizzard and already covered in snow. She continues forward, pushing through flying enemies and even encounters a giant Darn, though defeats it with ease. She moves into a futuristic room filled with seemingly newly created Darns, and spots Mr. Almond in a cage, but before she can reach him, he is moved upward to the cieling. She finds a gravity switch and takes the cieling with changing gravityddw to where Mr. Almond is. There she fights a boss, afterwards Tango calls her, a menacing look on her face. From there, Xoda continues into a light door and frees Almond from his prison. After a conversation with Almond about the cities, Doppelori finally shows up, and reveals that she is not the one behind all of the mayhem and that the Darns do not listen to her. An alarm goes off at the base, causing Xoda and Almond to run back to it.

A cutscene shows a tower rising up from the floor as Almond and Xoda make their way to the base. Almond mentions that towers just like that one are appearing all over the world. Xoda makes her way through the base, destroying trucks and some new Darns until she come across a hallway with Tango looking at a pod. She reveals that she is from the past, and that she intends to use the Evomatic from Noitu Love, also telling the story that she is in fact a literal carbon copy of an "aging machine". Another plot-twist reveals that it is infact the year 2888, not 2288. Tango then fuses with the Evomatic creating a superior Darn being. She rises from the ground as a giant statue. Xoda Rap disposes of the statue, but Tango manages to survives, and once again fights Xoda. Xoda barely makes it but is releaved to have defeated Tango. 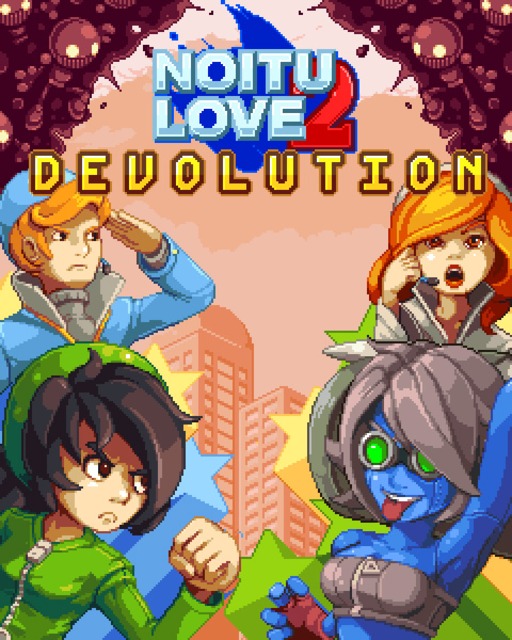