Wild Arms tells the tale of a treasure hunter, princess, and dream chaser on a quest to save the world of Filgaia from the invasion of the metal demons.

The beginning of this long-running franchise was overshadowed in its day, much in part to Final Fantasy VII's dominance in the domain of Playstation RPGs. Nevertheless, Wild Arms is a solid RPG. It's rather unique in that it employs both 2D and fully-3D environments; towns and dungeons are presented in glorious 2D fashion (reminiscent of Chrono Trigger and the SNES-era Final Fantasy games), while the battle engine is presented in fully-rendered 3D. It plays out like most other RPGs of its time: fully turn-based, plenty of dungeon-crawling and item-collecting, and a "teenagers save the world" story.

The three characters start out on separate paths and it's your job to unite them. Each has an introduction chapter that lets you get to know them. You find Jack the treasure hunter deep in ancient ruins, searching for something to help him become stronger. Princess Cecilia, the mage of the group, is studying magic at a secluded abbey and begins to learn the true meaning of her bloodline. Rudy, the rogue who has the ability to wield the ancient relic machines (also known as "ARMs"), is trying to find his place in the world by helping out in the village of Surf. Fate brings them together, and a good forty hours of gripping storylines and crazy plot twists await.

The main distinction Wild Arms has from its contemporaries is its heavy use of puzzles in dungeons. Each of the party members can acquire up to four tools that help solve these puzzles and progress further and including a lighter to start a fire and a grappling hook to cross gaps. It gives the dungeons the feel of an adventure game in the vein of Legend of Zelda or Alundra in that it requires some puzzle-solving skill. The combat in Wild Arms plays out like many turn-based RPGs of its era, it features a force system that is similar to limit breaks. Of note is the auto-battle command which has the AI take your turn for you. You can adjust whether you want it to act offensively, defensively, or balanced; this is similar (albeit in an extremely basic form) to the auto-battle and paradigm shifts of Final Fantasy XIII.

Filgaia is a dying world. A weapon developed to defeat the invading Metal Demons a thousand years ago succeeded, but it came at the cost of the planet. Its life continually drains, and what once used to be lush green forests are now desolate wastelands infested by dangerous monsters. Mother - the leader of the Metal Demons - was defeated but not killed. Her heart was split into three pieces and hidden in statues around the world to combat her ability to constantly regenerate. However, the Metal Demon threat has resurged; a group led by Ziekfried, the 'Quarter Knights', stole Mother's inactive body and plot to reclaim the pieces of her heart in a bid to revive her and take over Filgaia. The Guardians - an ancient race who protected Filgaia in the past - grow weak. With what little power they can still muster, the descendant of an ancient bloodline - Princess Cecilia - is called upon to help protect the planet. Her destiny is intertwined with a trouble treasure hunter - Jack Van Burace - and a young dreamchaser called Rudy Roughnight.

The trio are employed to excavate an ancient golem on the outskirts of Adlehyde, but the city is attacked during this time by the demons. Princess Cecilia, distraught at losing her father in the attack, agrees to give the demons the Tear Drop crystal - a family heirloom that they believe could be crucial in reviving Mother - in exchange for sparing the city. Witnessing first-hand the danger the Quarter Knights pose to Filgaia, the trio vow to stop Mother's revival.

With the help of technology left behind by the Elw - the ancient race who repelled the demons in the past - to navigate Filgaia and the support of the Guardians, the group pursues the Quarter Knights across the land. Unfortunately, they are unable to prevent them from acquiring all three pieces of Mother's heart, and she is revived. To the knights' surprise, Mother's plan for Filgaia is to destroy it and everyone on it (including the demons), whereas their own plan had been to take over the planet and enslave its inhabitants. Meanwhile, the heroes venture into the tomb of Asgard, an earth golem that will allow them to penetrate the heavily guarded Photosphere - the Metal Demons' base of operations. They manage to infiltrate the base, and with the help of a mysterious stranger, reclaim Cecilia's Tear Drop crystal and defeat a weakened Mother. As the Photosphere begins to sink into the ocean, the stranger is revealed to be Ziekfried, playing the group to eliminate Mother and continue with his plans.

The Demons plan to destroy the network created by the Guardians - the Ray Line - used as a last resort to consolidate their power and maintain Filgaia. The group battles forth and confront Ziekfried, who is thrown into a rift in space during the encounter. He wakes up in the sunken ruins of the Photosphere and is consumed by Mother, but the remaining Quarter Knights aren't deterred. They create their own crystal that destroys rather than creates, and plan to use the Ray Line to distribute it and disrupt the entire planet. However, this becomes secondary to the discovery of Malduke, a space station containing a weapon that could destroy Filgaia. The heroes fight their way to Malduke by climbing Ka Dingel, the tower that connects Filgaia to Malduke, and confront Motherfried, a fusion of Mother and Ziekfried.

They succeed in defeating Motherfried, but the weapon has already been activated. The Guardians muster all the power they have left to protect the planet, while the group teleports back to Filgaia. In the middle of the teleportation, the remnant of ZIekfried makes a final, desperate attempt to foil the party. He fails, and the trio arrives back at a collapsing Ka Dingel. Asgard, the golem they had used to penetrate the Photosphere, saves the day by guarding them from the debris and explosions, and is destroyed in the process. This theme - of the ability to feel and love overcoming the purpose of being created solely as a weapon - is a constant in the story (see Rudy and Jack). Finally, Filgaia is safe again. Jack and Rudy leave Cecilia to rule over Adlehyde, but she gets away from the castle to continue traveling with them.

The soundtrack is composed by Michiko Naruke, and is probably the aspect most strongly influenced by the wild west. The overworld theme, 'Lone Bird in the Shire', contains a melody used by Ennio Morricone (in 'The Ecstasy of Gold'), a composer known for his scores in Western-themed movies. A single-CD sample entitled 'Wild Arms Original Game Sountrack' was released in Japan in 1997; after the release of Wild Arms Alter Code: F, the full soundtrack of the original game ('Wild Arms Complete Tracks') was relased in 2006. The two disc track list is as follows: 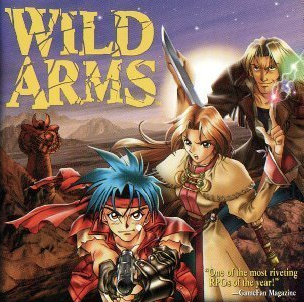