Soldier of Fortune is a violent first-person shooter where you take on the role of John Mullins, a mercenary tasked with retrieving stolen nuclear weapons.
PlayStation 2

Soldier of Fortune is an first-person shooter developed by Raven Software. The game was first released on March 2000 for the PC then later the Dreamcast and Playstation 2. The player assumes the role of John Mullins; a Mercenary who works for a US-based terrorist organisation known only as "The Shop". John is sent on a mission to recover stolen nuclear warheads from a Neo-Nazi group who has stolen them from a storage facility in Russia and are now proceeding to sell them so that the Shop can use them to further their own mysterious agenda.

Soldier of Fortune uses a modified version of id Tech 2 from id Software. The varying array of weapons on offer, from the humble pistol right up to the in your face rocket launcher, made great use of the GHOUL damage model engine developed by Raven Software, allowing the player to leave an enemy's bowels in a pile next to their body, or blowing their arm clean off etc. The use of the GHOUL engine meant that a skilled player could shoot an enemy's gun clean out of their hands leading to them surrendering or cowering on the floor. Soldier of Fortune was the first game to utilize the GHOUL engine, which was later used in Soldier of Fortune II: Double Helix and Star Wars Jedi Knight II: Jedi Outcast. If the user felt that the violence was too excessive, it was possible to turn it off. Some countries even demanded the GHOUL engine removed from the game before they would allow it to be sold. The stripped down version of the game was called: Soldier of Fortune: Tactical Low-Violence Version.

To use one of the following weapons and items, we have to press the inventory button

Soldier of Fortune: Gold was released on the PlayStation 2 and PC in 2002, and was the only version available on the PlayStation 2. The Gold Edition was published by Majesco Entertainment and developer Pipe Dream Interactive stood for the porting process.

The Gold edition is basically the original Soldier of Fortune, but with some minor changes:

The platinum edition was released in 2007 for the PC.

The only additions to the Gold Edition extras were: 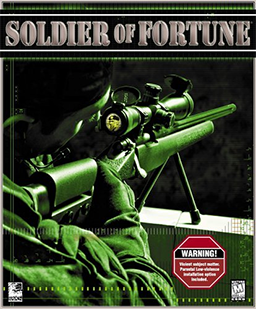