Specnaz: Project Wolf is a first-person tactical shooting game. In addition to tactical action, it also includes mission-based objectives and skills and services that can be accessed through the Wolf.

SPECNAZ is a term used to describe special forces in Russia and Eastern Bloc countries formerly of the Soviet Union. It is quite literally a short form of the term “SPECialnogo NAZnacenie” meaning “special assignment”. SPECNAZ is similar to Delta Force in th eUS, or SAS in England: An elite squad of highly trained soldiers sent to do special and secret missions. In the West, SPECNAZ became an umbrella term for the special forces of the Soviet Union in general. In a more general sense, SPECNAZ have an image as the only forces in the Soviet military on par with American special forces.

SPECNAZ the game is a first-person tactical shooter. Tactics are given to the player, though the player is not forced to follow them and can proceed to complete a mission in whatever way he or she sees fit, as long as the mission parameters are met. The Wolf, another important part of the game, is the skills and services the player is able to use for much of the game.

SPECNAZ: Project Wolf’s story centers on the remnants of a Soviet network of nuclear weapons bases throughout the world called the “Spider System”. After the collapse of the Soviet Union, these bases became a target of local armed forces wanting to assert their dominance by retreiving old Soviet nukes from these facilities.

After almost losing a nuke from a Cuban base in Africa, a top secret program called “Steel Fist” was started to remove the nuclear weapons from the “Spider System”. An eight person flight crew was charged with recovering these weapons as part of “Steel Fist”, but ended up disappearing on their way back to the motherland.

SPECNAZ, a special operations force in Iran at the time of “Steel Fist” finds out about the lost nukes and is tasked with returning the “package” to where it belongs. 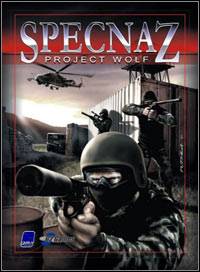