Clannad is a visual novel developed by Key and published by Visual Art's for Windows PCs in Japan on April 28, 2004 and unlike Key's previous works, Kanon and Air, Clannad was an "all-ages" title. The game proved to be a huge success and was the best-selling PC game in Japan at the time of its release and received several adaptations into other media. Clannad was later ported to the PlayStation 2 by Interchannel in 2006 with full voice acting, which was later ported back to the PC in 2008. Eventually Prototype ported Clannad to a number of systems including the PlayStation Portable, Xbox 360, PlayStation 3, Vita and PlayStation 4. An adult spin-off game called Tomoyo After: It's a Wonderful Life was also released by Key for the PC on November 25, 2005 which expands on the story of one of the heroines, Tomoyo Sakagami.

Clannad was not released outside of Japan for many years and could only be played in English with the use of unofficial, and incomplete, translation patches created by fans until Sekai Project ran a Kickstarter campaign in 2014 to localize the "Full Voice Edition" of Clannad. The campaign was successful, raising over $540,000, and Sekai eventually released Clannad on Steam in November of 2015. Sekai's version of Clannad included HD assets from the console ports as well as a new in-game encyclopedia that contained entries that elaborated on Japanese cultural references used in the game. Prototype's PlayStation 4 port released in June 2018 also contained an English language option allowing players to switch between the Japanese script and Sekai's English translation, which lead to Prototype making the PS4 release available in North America as a digital-only title on June 21st. The same was later done for Clannad's Nintendo Switch port in 2019 with the game releasing in Japan and in North America as a digital download on July 4th.

Like many visual novels, the gameplay revolves around making moral decisions and dialogue choices that impact the non-linear branching narrative. The game has various different plot-lines the player could follow based on their choices, leading to a variety of different alternate endings. The School Life arc has five major plot-lines as well as several additional smaller scenarios, with over a dozen possible endings. When the player completes a character's scenario, he or she receives an orb of light. When eight of these lights are obtained, the game's second story arc, After Story, is made available. The After Story arc continues from where the Nagisa plot-line left off and has several possible alternate endings of its own.

Originally, the lights were meant to be items that players could use in the game, but since this increased the game's complexity, and detracted from the storyline, the function of the lights was simplified and made less intrusive.

On Yukine's story path, the player can take part in a storage room spell where Tomoya will be locked up in the sports equipment storage room with a particular character. The character who will be involved will depend on the choices made up until that point.

On Fuko's story path, the player is given the choice to play pranks on her. There are 4 available types of pranks and they can be used twice each. The chance to use them is presented during specific parts of the story path, with certain pranks giving different results depending on the occasion. Certain occasions will not allow certain pranks to be used.

The game is divided into two portions: the School Life arc and the After Story arc.

Tomoya Okazaki is a final year high-school student resentful of his life. His mother passed away from a car accident when he was younger, causing his father to resort to alcohol and gambling. This resulted in fights between the two until Tomoya's shoulder was injured in a fight, ending his basketball career. Since then, Tomoya has had a distant relationship with his father, causing him to become a delinquent over time. While on a walk to school, he meets a strange girl named Nagisa Furukawa who is a year older, but is repeating due to illness. Due to this, she is often alone as most of her friends have moved on. The two begin hanging out and slowly, as time goes by, Tomoya finds his life shifting in a new direction.

The After Story arc continues from where the Nagisa plot-line left off. After graduating from high school, Tomoya and Nagisa's relationship begins to enter a level of intimacy unlike before. Through his relationship with Nagisa, and his various encounters, Tomoya begins to understand the meaning and importance of family. However, as Tomoya and Nagisa begin their own family together, they are faced with many hardships and challenges along the way.

Time, day, and date is an important feature in Key's works. Clannad provides a day and date display which can be toggled via the options menu. The story line follows a predetermined schedule, incorporating half school days on Saturday, school holidays and events. The first day of school is on April 14, 2003. The School Founder's Day is on May 11.

A recurring theme in Clannad. Dango translates to rice dumpling. The Big Dango Family, also known as The Great Dango Family (dango daikazoku in Japanese) is a fictional group mascot which comprises of a big happy family of 100 dangos of many colors. They represent strong familial relationship. In Clannad, Nagisa and her family loves the Big Dango Family.

The Big Dango Family has a theme song, which is also the theme song for Nagisa and Clannad. The song is sung by Nagisa, then later by Ushio as well.

Light orbs represent a person's happiness. It can be consumed to make a wish. An orb is obtain when Tomoya successfully completes a character's story path. There are a total of 8 orbs that must be obtained during the School Life arc in order to unlock the After Story arc. The story paths that provide light orbs on the School Life arc are Misae, Yukine, Tomoyo, Kotomi, Kyou, Kappei, the Sunohara Siblings, and Koumura. Fuko's story path will consume a light orb.

The choices made in Nagisa's story path will influence the After Story arc. The After Story arc contains another 6 light orbs, which are from Sanae, Akio, Yusuke, Naoyuki, Fuko, and Kouko. This totals to 13 which is needed to unlock the True Ending.

Tomoya experiences a sequential dream which takes place in the Illusionary World. The Illusionary World is a vast desolate land with only a single remaining living girl. The name of the girl is never stated. She has the ability to create dolls out of junk that lies scattered across the landscape. Tomoya's dream is seen through the eyes of one of the dolls that she had created. He is unable to talk in the dream, and instead communicates with the girl through gestures.

Clannad has spawned several adaptations into other media including manga, novels and several anime series. The first anime adaptation was a film created by in 2007 by Toei Animation and was quickly followed by a 24-epsiode television show animated by the acclaimed Kyoto Animation studio in the same year. The second, and more acclaimed, television series adapted the After Story arc and was once again produced by Kyoto Animation in 2008. Clannad After Story's adaptation in particular became one of the highest user-rated anime of all time on sites like Anime News Network and MyAnimeList. The show also received highly positive reviews from various critics, including DVD Talk, THEM Anime Reviews, and Anime News Network.

An article published by the John Hopkins University proclaimed Clannad as the visual novel's "magnum opus" for fully realizing the potential of the visual novel medium, comparing its impact to that of Ulysses for novels, Citizen Kane for cinema, and Watchmen for comic books. The same article also stated that Clannad "proved more emotionally powerful than works like Titanic, for successfully moving the reader without the forcing a reaction upon them." 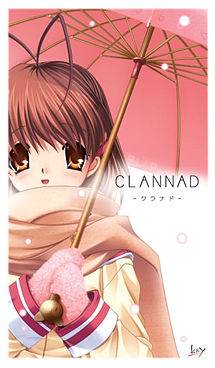