Shellshock 2: Blood Trails is the sequel to Guerrilla Games' Shellshock: Nam '67. It shifts the perspective to first-person and contains more horror themes. It takes place in Cambodia during the Vietnam War.
Xbox 360 PlayStation 3

Shellshock 2: Blood Trails was Rebellion's first game on the Xbox 360 and Playstation 3 platforms. It was also released on the PC. The game is a first-person survival horror title set during the Vietnam War. The player is cast in the role of American draftee Private Nathanial Walker, who during his journey must explore environments including the jungle, a run-down mansion, Vietcong tunnel systems, trenches, and villages.

At the peak of the Vietnam War, a covert ops plane is transporting a top secret consignment known only as "Whiteknight" when it goes down over the jungles of Cambodia. A special ops team is sent out immediately to search for and locate Whiteknight. Slowly, one-by-one they disappear, in the jungles, without a trace. One month later, one of the members of the ops team stumbles out of the jungles alive, but has been driven mad. Private Nate Walker is sent to the quarantine zone where they are holding the ops member to try to get information about Whiteknight from him. As the game progresses, Nate learns why he was sent to question the operative, why the Vietcong want to take him alive, and what Whiteknight is.

Combat is very similar to other first-person shooters. The player can carry flares, frag grenades, a knife, a pistol and a rifle or shotgun. Ammunition is comparatively scarce in this game however, so calm, accurate fire using the iron-sights is needed to ensure that the player will have enough ammunition.

During certain moments, a "grapple attack" may occur. Players are required to hit the buttons in the order they appear to defend himself. If the player is successful, he is given the choice to execute his attacker one of two ways - either with the butt of, or a single shot from, his weapon.

Traps are present in a few areas as well. These include a horizontally-swinging bamboo traps, spiky logs that swing down from the treetops and spiked pits. If a trap is triggered, time slows and the player is given an opportunity to save himself by pressing the button that flashes on the screen.

The heads-up display is contextual in that it is not shown unless the player is doing something. For example, reloading briefly shows how much ammunition the player has left, and looking at a a weapon on the ground prompts the player to swap his current gun or pick up ammunition if he is carrying that type of weapon already. Instead, the player's state is reflected in other visual and audio cues. For example, blood on the screen indicates damage, and stamina is reflected by how heavy Nate is breathing. This is an attempt by the developer to increase immersion.

As with many survival-horror games, immersion is an important part of Shellshock 2. In addition to the previously-mentioned HUD, lighting effects and sound design are utilized in an attempt to heighten tension.

Shellshock 2: Blood Trails received mid to low reviews. Comments range from "boring" and "uninspired" to "dreadful" and "disaster." The main issues cited by critics include the imprecision of the control scheme, bad AI, and bad level design. 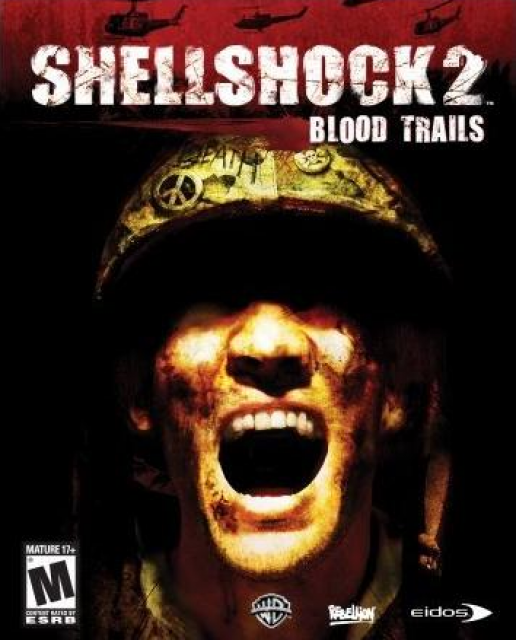