Fallen Earth is an MMORPG set in a post-apocalyptic Earth in the year 2156. The game was recently purchased by F2P Publisher, GamersFirst, and is now free to play.

Fallen Earth is an MMORPG developed by Fallen Earth LLC and Icarus Studios. It takes place in a post apocalyptic earth, within and around The Grand Canyon.

The game world is based off topographic maps of the real world Grand Canyon. It measures 84 kilometers on each side. In total the map covers around 7000 square kilometres of terrain. It is said to support the AGEIA PhysX Processor and In-game voice communication technology.

The combat is basically that of a first person shooter. But the camera can move from a first person perspective to a third person perspective. In order to hit targets players will have to manually keep targets in a reticule although skills will still be used to influence combat in other ways. There will be no "target locking". The game will feature thousands of equipment and accessories that vary in strength for players to craft and put into 22 equipment slots. Equipment can be worn in a variety of different ways for example, wearing a baseball cap forwards or backwards, tucking or untucking a shirt. etc. You will be able to carry a maximum of 6 weapons and will all be part of your characters appearance. Vehicles also have a role in Fallen Earth, with each vehicle differing in carrying capacity, type of fuel, weapons, and efficiency.

In Fallen Earth, all players start out as neutral and can choose to stay as neutral or align themselves with a faction. Going with a faction will give players easier access to learning specific skills. You can also align yourself with a number of NPC factions. Each player faction has another faction that is considered the "Arch Enemy Faction" 2 factions being "allies" and 2 factions being "enemies". Players can also join "sub-factions" in which each have there own special titles, equipment and abilities.

The factions are as follows:

The story of Fallen Earth starts around the 21st century, when the first of many natural disasters hit the United States. As people struggle to recover, an investment tycoon buys a mega-corporation called GlobalTech. By the year 2051 he moves the company to the Grand Canyon, where they eventually create a self-sufficient military and economic state. During this, in India and Pakistan a deadly virus appeared among the human population; as the infection started to spread all of the countries of the world, even Sweden, started accusing each other of engineering the virus. Paranoia turned into an all-out nuclear conflict. The war, combined with the virus, ravaged the entire planet. Less than one percent of the Earth's human population survived, and today the Grand Canyon and Hoover Dam are the only known large outposts of human life.

Finally, after years of development, The Fallen Earth developers announced in a press release in June 2008, that the game has reached feature-complete status and in October 2008, it was announced on the official website, Fallen Earth has reached content-complete status. The first wave of the alpha tests started in August 2008, and the closed beta started in February 2009. The game was released September 22, 2009. 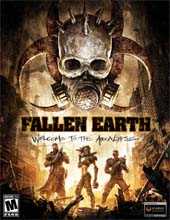