Gradius Gaiden is a shooter that was originally released only in Japan for the PlayStation by Konami on August 28, 1997. It was the first true Gradius follow-up since Gradius III in 1989 and contains features seemingly influenced by Gradius spin-off series Salamander and Parodius, such as two-player simultaneous play and multiple selectable ships.

Gradius Gaiden was not made available internationally until the Gradius Collection was available for the PSP in 2006. This release eschewed the two-player option but otherwise it is a perfect port of the original PlayStation version.

The game's plot is told through a Star Wars style opening crawl available if you watch the title screen demos. It recounts the latest attack by the evil Bacterian forces on the peaceful inhabitants of the planet Gradius. It is as follows:

"During the 3rd Bacterian war, planet Gradius defeated the Bacterians by destroying their center of power. The threat of invasion was gone and peace returned to Gradius.

200 years passed, the civilization of Gradius prospered and it looked as if the peace would last forever. But the nightmare suddenly returned.

It began with the disappearance of a science vessel which went to the dark nebula known as the "EVIL RANGE." The "EVIL RANGE" was never investigated because it was known as a dangerous nebula and entry was prohibited by the government. Soon after the disapperance of the science vessel, the colony planets of Gradius were attacked and ruined by some unknown force.

At this point Gradius Army HQ decided to launch a desperation attack to the center of the dark nebula which seemed to be the source of the invaders.

Receiving the order, 4 hyper space fighters launched from the mothership to the dark nebula carrying the last hope to save planet Gradius on their wings..."

The text crawl is read by a male or female voice which can be chosen in the options and also affects the support voice in-game.

Gradius Gaiden's gameplay is a 2D-style horizontal shoot-em-up. Its graphics are sprite-based but do showcase some 3D effects, which gives the game a visual style similar to another Konami PlayStation title you may have heard of called Castlevania: Symphony of the Night.

Gradius Gaiden gives up to two players the choice of four space fighters, each with their own unique weapon set. All the ships share the Speed Up and Option capabilities and can choose between four types of shields, in addition to being able to power up all offensive abilities to a second level.

Two old and two new shield types are free for you to choose from in Gradius Gaiden. The classic Shield from the original Gradius returns the same as always and while it can only protect the front of your ship, it can also soak up a lot of hits. The Force Field from Salamander protects the entirety of the ship, but can only take three hits before it dissipates. The two new types introduced in Gradius Gaiden are the Guard and Limit. The Guard only protects the top and bottom of your ship, but also prevents you from crashing into the environment. The Limit makes you completely invincible -- but only for a matter of seconds. All four types can be suited to meet any play style, but the Limit ends up being the most useful due to another new mechanic introduced in Gradius Gaiden -- the Gauge Edit.

While you cannot edit your weapon selection like in previous Gradius titles, Gradius Gaiden allows you to swap the order of your power-up gauge -- the Gradius staple that lets you "purchase" upgrades that require sequentially more power-up capsules to activate. The normal order of the power-up gauge is as follows.

However, thanks to the Gauge Edit, you can, for example, move your Shield to the front of the gauge, where it will cost only one capsule instead of the normal six. As long as enemies drop enough power capsules, you could theoretically remain invincible with the Limit shield type for an entire stage, but at the cost of having fast access to Speed Ups and other power-ups should you die. To succeed in Gradius Gaiden, you must choose the order of your Gauge Edit -- but choose wisely.

STAGE 1 - BEYOND THE WHITE STORM

Space snow drifts abound in this first, basic stage replete with a space aurora. Its boss, Blizzard Crawler, is a huge centipede-like creature that burrows in the snow, giving you a chance to hit its weak point on its tail.

Stage 2 is a junkyard full of enemy wreckage previous Vic Vipers have laid waste to. A keen eye will recognize series bosses from past games. The stage has two branching paths, leading to completely different bosses, Grave at the bottom and Nobil at the top. However, both routes lead to the 3rd stage.

STAGE 3 - INTO THE CRYSTAL CAGE

As its name suggests, this level is made entirely of crystals. When shot, the crystals will refract certain laser types, which can be used to your advantage or disadvantage. The boss is a variation on the Bigcore series named Shining Core that greets you by bursting out of a crystal shell.

The requisite Moai stage. Pretty standard until the Moai suddenly start shooting HUGE LASERS out of their eyes in addition to their typical rings. The boss is a double-headed Easter Island monument called Moai Dimension that rotates around you while spouting insults.

This stage showcases an effective use of 3D effects to make the floor and ceiling gyrate as if it were alive, as if the armies of malignant cells weren't enough to tell. This scaling also comes into play during the boss fight with Mad Skin, who has an eye that shoots HUGE LASERS.

A plant stage that demonstrates what would happen if you didn't cut your grass for a billion years and is overgrown with a garden variety of vicious, vile, and voracious vegetative villains. The boss is a mutant flower that has three irritating forms: Stinger Kid, Hunter Fang, and Giga's Rose.

STAGE 7 - ON THE EVENT HORIZON

Stage 7 begins as an homage to the classic recurring volcano stage design but spices up the old recipe as the whole thing begins to get sucked into a black hole. Another Bigcore variation, Kraken, serves as boss and can throw giant boulders at you, which is pretty boss, I guess.

Speaking of bosses, Gradius wrote the book on throwing lots of them at you and this stage's name is no lie -- it's a pure boss rush if there ever was one. Six of the buggers await, with a secret seventh should you be playing on the second loop.

You begin with a high speed infiltration of the enemy fortress, but what future truly awaits within? You think you can beat him with that? Loser.

The final boss is O.V.U.M., which is an acronym that stands for Original Visions of Ultimate Monster.

Gradius Gaiden's soundtrack was composed by Norikazu Miura (under the alias Nories Miura), who went on to compose for Tokimeki Memorial and later Suikoden games. It is more unique among Gradius titles in that its music is long and more complex, in contrast to the shorter, melodic loops of its forebears.

The soundtrack to the game was released on CD on December 22, 1997 with the catalog number KICA-7817. It is one of the rarer game soundtracks released and along with its Gradius pedigree, it holds considerable value.

Music from Gradius Gaiden was remixed and released as part of a DLC pack for the Xbox 360 port of Otomedius Gorgeous on March 25, 2009. The pack's music is used for new characters Esmeralda and Kuhn Poini, who represent Gradius Gaiden's Jade Knight and Falchion β. 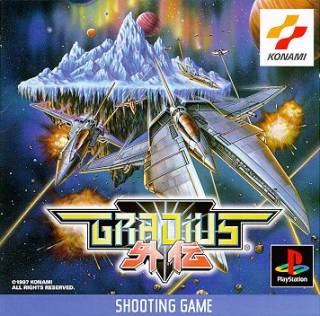