A Pac-Man style game made by Nintendo for the Famicom and NES. It is the only NES-era game by Shigeru Miyamoto never to have been released in the US.

Devil World is a maze-based game by Nintendo R&D1 and Intelligent Systems, released in Japan in 1984 and Europe in 1987. It is most notable as the only game produced by Shigeru Miyamoto that was not released in the USA. Nintendo of America's strict policies on religious imagery denied the game a release as it featured crosses, bibles, and The Devil. It was also the first game designed by Takashi Tezuka.

The game was developed after Donkey Kong had hit the market, but before Super Mario Bros, and has the distinction of being the first original game for the Famicom/NES that Miyamoto worked on.

The gameplay is very similar to that of Pac-Man, but with some additions. The Devil stands on top of the screen and gestures in the direction the screen will be scrolling, and there are walls surrounding the game field. If Tamagon is caught between a wall and a block when the screen scrolls, he will be squashed and die.

The game is played in rounds that have three different stages. The first stage has Tamagon collecting pellets while avoiding enemies, like in Pac Man. But to be able to collect pellets and harm enemies, Tamagon must first find one of the crosses that are scattered through the level, which acts somewhat like a power pellet, but they can be picked up as many times as needed. With the cross in front of him, he can collect the pellets and spit fire at enemies. The cross only lasts for about 10-15 seconds. Then Tamagon must find a new one.

When killing an enemy, they turn into a floating eye or something which Tamagon can eat for a lot of points. Then they re-appear after a couple of seconds. There is also a mini-devil that appears in some stages who is invulnerable, but he will change direction if shot. Sometimes a couple of ice cream cones will appear which Tamagon can collect for 800 points each. The level will end once a certain amount of the pellets are collected (sometimes there are pellets left to collect when the level ends for some reason.)

In the second stage, Tamagon must take four bibles and plug them into the holes of the red block with a skull on it. He can only spit fire while carrying a bible. The third stage is just a bonus stage where Tamagon collects "Bonus blocks" for extra points. After the bonus stage, the "round" is over, and a new round begins. There are three different rounds with different levels, then the game just repeats and gets faster until the player runs out of lives. 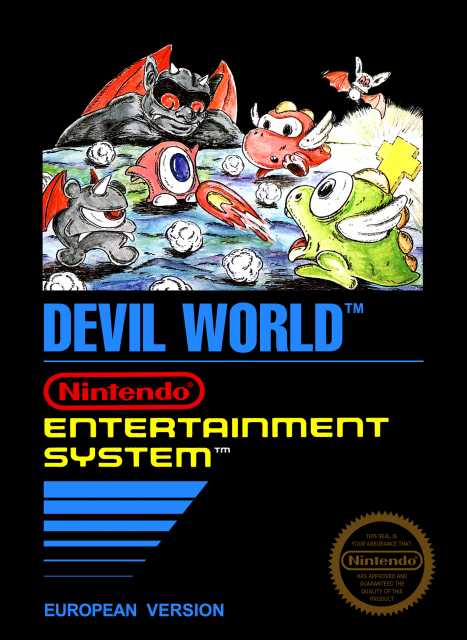