Global Agenda is an MMO Third Person Shooter using the Unreal 3 engine, being developed by Hi-Rez Studios. This "spy-fi" action game focuses on Agencies that fight one another for strategic points in the world which allow access to new technology in hopes of gaining supremacy among one another.

Global Agenda features three different modes of gameplay: Player versus Player, Player versus Enemy, and Alliance versus Alliance.  Regardless of the mode of play, the player straps on a jetpack which shares its power pool with the players weapons.  Power regenerates quickly, but unlike most other modern games the players health does not unless healed by an external source.  These basics make the pace of games balanced between frantic and strategic, allowing for great team coordination yet still showcasing individual ability.

Special Operations are the PvE side of Global Agenda where players can get loot and pieces to craft items.  Generally missions pit the player against the global dictatorship known as the Commonwealth that emerged after a heavily nuclear World War III.  Players can either team up into groups of four or queue into specialized solo missions.  The most difficult of all of the PvE types is Ultra Max security which can reward players unique loot such as rainbow dye.  There is also a hybrid game mode known as Double Agent which is similar to a standard four player PvE mission, but on the opposing side there are two players preventing the attacking team from defeating the boss.

The Mercenary Combat queue pits two teams of 10 players against each other in 5 different modes.  Control has the players fighting for control over three points on the map, with the team controlling two points accruing victory points faster.  In Breach maps the attacking team must take a set of chronological objectives from the defending team before time expires in order to win.  Payload maps the attacking team must push a payload from their base into their opponents base with game-extending checkpoints along the way.  Similar to King of the Hill and the infamous Modern Warfare Headquarters game mode, Scramble has teams vying for control over randomly spawning points.  The fifth mode is a unique spin on capture the flag, but a player must drive a powerful robotic suit to the point instead of capturing a flag.  Premades in the mercenary queue may only have two members in an effort to preserve the pick-up style of matchmaking.

The Arenas use the Scramble game mode of Mercenary but allow premades of up to 10 players.  There are currently two queues, 10v10 and 4v4, but in the September/October patch this will be changed to only the 4v4 mode.

Agency versus Agency (AvA) is a game mode that pits single agencies against one another in order to capture 'hexes' on a hexagonal grid representing a chunk of the earth not currently controlled by the Commonwealth. Capturing a hex, claimed or not, starts with the bidding process.  During this three minute window agencies can bid or counter bid for ownership if the hex is not controlled, or bid for the ability to attack if the hex is defended.  Upon gaining control of a hex the conquering agency may set up a facility on that hex.  The resources that some facilities produce contribute to the agencies net worth which determines winners of the two week long seasons.

AvA matches are played out on maps that are representative of the type of facility on the hex under attack.  The attacking team must have at least eight players and be converted to a Strike Force.  A Strike Force (SF) consists of the players, their dropship, and the cargo that can fit into their dropship that they would like to bring to the battle.  This cargo can range from emp generators that disables the opponents tech to powerful anti-player vehicles known as Vindicators.

Originally the ability to AvA was a pay-to-play service, but with the June 25th drop of subscriptions, this restriction was dropped as well.

On June 25th  Hi-Rez Studios announced that Global Agenda will be free to play with no subscription cost. 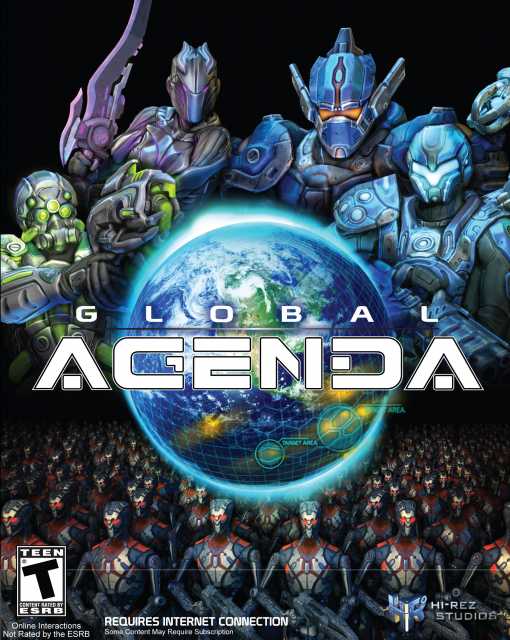