Trine is a fantasy 2D side-scroller for PC and PlayStation 3 that lets you switch between three different characters to solve puzzles and find treasure.

PC Wii U Xbox One PlayStation 4

Trine is 2D side-scrolling puzzle platform game that was developed by Frozenbyte, Inc. and released for the PC and PlayStation 3 (via PSN) during the summer of 2009. Then on July 24th 2014 the game a remake / enhanced version of the game (Trine: Enchanted Edition) was released on the PlayStation 4 and Wii U featuring a graphical overhaul using the engine used to create the sequel Trine 2 and online multiplayer.

The characters in Trine are very much lighter versions of the archetypal definition of three very famous fantasy classes:

Trine bills itself as a "physics-based action game", and focuses on platforming, combat, and simple puzzle solving. The player uses the knight, the thief, and the wizard to work their way through this 2D side scrolling environment, and can switch between the characters throughout the game at any time. Each character has their own individual abilities that can be used to solve various conundrums faced by the player.

The Knight uses a heavy sword, and can lift, carry and throw heavy objects, and can lift his shield to block attacks. The Thief can use a grappling hook on wooden surfaces and use her bow and arrow to kill enemies and activate remote switches. The Wizard is unique in that he has the ability to summon physical objects, such as boxes and planks, which can be used as a stepping stone for higher jumps, to drop on enemies, or to block projectiles. Each character has their own health and energy bar as well which adds a layer of management to the game's equation.

There are two ways to gain experience in Trine:

The latter creates interesting mini-challenges as you go, as these potions are often hidden or just apparently out of reach, causing the player to use creative problem solving to retrieve the potion. Once the player recovers a certain amount of green potions or enemy "souls", they are allowed to level up one of the characters, granting upgrades like increased damage and new attacks. The secret treasure chests are generally hidden much more discreetly and requires the player to get creative in order to find & reach their location. Treasures grant the characters other special abilities, and while some can be swapped between more than one character, others are character specific.

The game has local co-op multiplayer, allowing up to two other players to join your game. This adds a new element to the gameplay, by allowing new ways to overcome obstacles by combining each characters abilities. To play the game co-op on the PC, you may now use any PC gamepad (including the Xbox 360 controller), or multiple keyboards and mice. Each player may also assign their own controls if they wish.

Trine designer and Frozenbyte CEO, Lauri Hyvärinen has said they plan to add online multiplayer at a later date, but this seems less likely of possibility as time passes.

Throughout the course of the game, the player -- if adventurous enough -- can find a series of items inside of treasure chests (some of them hidden away from the game's main path) that will make his/her journey through the world of Trine a lot easier.

Although released for PC on July 2, 2009, the release for the PlayStation Network was delayed, likely in order to optimize it for the PS3 platform. In mid-July, a Frozenbyte employee posted on the game's official forums saying that the game would be released on July 30. However, on July 29 the same Frozenbyte employee wrote, "Unfortunately, Trine isn't coming to PSN this week, and this time it's our fault as there was discovered yet another small bug, which needed to be fixed."

Some cited the release of Sony's Fat Princess, also scheduled for release on July 30, as the reason for the delay. They hypothesized that Sony must have forced Frozenbyte to push back the release of Trine, fearing low sales due to competition. However, that theory seemed less and less likely as more time passed without a Trine release.

Trine was eventually released on PSN in Europe on September 17th 2009, and on October 22nd in North America. One of the advantages of buying the game on PSN was supposed to be that it would be $10 cheaper than the PC version, but the price of the PC version dropped $10 before the PSN release, leaving that advantage unrealized.

Free DLC...and Hint of a Sequel

On April 19th 2010, Frozenbyte released a free DLC level for the PC titled "Path to New Dawn" (the level was later released on the PSN on August 3rd, 2010 for $0.99). The level becomes available upon completion of the game and features 10 unique items for players to collect.

Upon completing the level, an image of a dragon appears on screen with a note reading "The story has just begun...". While this teased that this might not be the end of the Trine storyline, the sequel for the game, Trine 2, wasn't officially unveiled until E3 2010.

In 2014, a new version of Trine, dubbed Enchanted Edition, was released for PC, Linux, Mac, PlayStation 4 and Wii U. The Enchanted Edition is a free update for owners of the Steam version but players can choose between it and the original base version upon starting the game. Now running on the more capable Trine 2 engine, the Enchanted Edition introduces an online co-op mode, mid-level saving.

Trine is set in a fantasy kingdom, which was once beautiful and prosperous, but has since fallen into ruin due to an undead army that attacked the kingdom. Trine starts with three adventurers, a knight named Pontius, a thief named Zoya, and a wizard named Amadeus, who simultaneously stumble upon an ancient artifact called the Trine. All three touch the Trine at the same time, which magically fuses all three souls into one body. They each maintain their individual voices & consciousnesses, but can only inhabit the single body one at a time. Luckily, they are able to transform into any one of the three characters at any time they choose.

The trio are reluctant to work together, but in order to find a way to counteract the Trine and separate their souls from each other, they are forced to battle their way through the kingdom and the undead armies to find a cure. The Wizard is able to decipher some ancient inscriptions, and they soon discover that the Trine is one part of a trio of ancient artifacts, representing the mind, the body, and the soul. The three artifacts are scattered through the kingdom, but the Wizard theorizes that if these three artifacts are brought together, it may free them from the Trine.

As the adventurers battle their way through the kingdom, they eventually do bring the three artifacts together, which indeed unbinds their souls from the Trine. Reuniting the artifacts also has the fortunate side effect of liberating the kingdom from the undead armies, and Pontius, Amadeus and Zoya are hailed as heroes.

The soundtrack for Trine was composed by Ari Pulkkinen. The main theme can be downloaded for free at the musician's website. 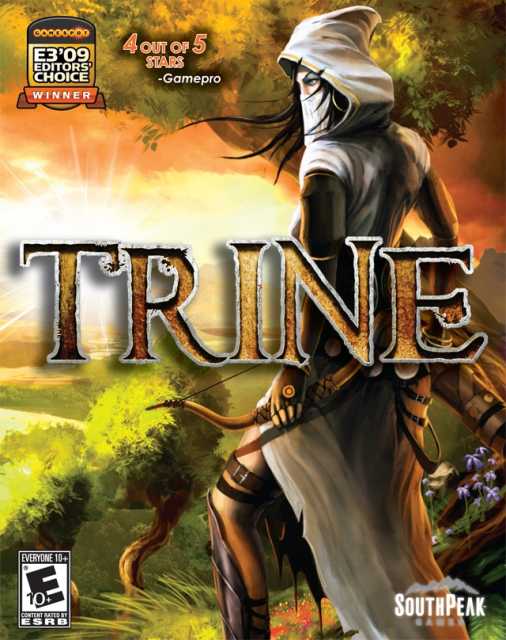