Lufia & the Fortress of Doom

Lufia & the Fortress of Doom is a role-playing game and the first installment in the Lufia series. The game follows a young boy who is on a quest to save the world from the evil Sinistrals.

Lufia & the Fortress of Doom was developed by Neverland Co., Ltd. and published by Taito Corporation for the SNES in December 1993. It is the first installment in the Lufia series. The game follows the traditional role-playing game formula of the era and contains a lot of basic RPG elements. Lufia & the Fortress of Doom gathered enough of a loyal following to warrant the production of more sequels, including the prequel Lufia II: Rise of the Sinistrals which reveals the events leading up to the first game's prologue.

The story begins with a prologue centering around a time in which four evil Sinistrals named Daos, Amon, Erim, and Gades plan on spreading terror and chaos throughout the world. The Sinistrals were located on a floating island called the Fortress of Doom which more or less served as their headquarters. During that time, four brave souls became the world's last ray of hope and accepted the challenge of trying to stop the Sinistals; these heroes were known as Maxim, Selan, Artea, and Guy. The heroes ventured forth to the Fortress of Doom to attempt to defeat the evil Sinistrals and eventually succeeded. After the Sinistrals were defeated, the floating island started to collapse. Weak from the battle, Selan didn't have enough strength to walk, and Maxim refused to leave her side. Artea and Guy became separated from them and escaped just before the island collapsed; however, Maxim and Selan weren't so lucky and perished.

Fast-forward into the future and the player is introduced to a mysterious girl named Lufia, as well as the nameless Hero of the story who also happens to be a descendant of Maxim. The two grow up with each other in the small town of Alekia, and become close childhood friends. After ninety-nine years of peace, the nearby kingdom of Sheran is viciously attacked by monsters. As events begin to unfold, a rumor springs forth that the commander of the monstrous army who ordered the attack fits the description of the late Sinistral, Gades.

Being a descendant from the great Maxim, the hero takes it upon himself to investigate the attack in Sheran to confirm the validity of the rumors. Gades was indeed behind the attack and is still in Sheran where the Hero meets and confronts him. The Hero engages in a fierce battle with the Sinistral, is easily defeated, and barely survives. Knowing the Sinistrals are still alive, the Hero sets out on a long journey to rid the world once again of the evil Sinistrals. He is joined by Lufia, whose mysterious past begins to unfold as the story progresses, and two others named Aguro and Jerin who he meets along the way.

This game is pretty straightforward and contains many traditional RPG elements. The player moves the characters around a world map entering towns and other various places where they can talk to people, collect items, buy equipment, and perform tasks to aid them in their overall mission of saving the world. Characters become stronger by leveling up when they earn enough experience through winning battles, which in turn unlocks new abilities and boosts several attributes.

Battles occur randomly in hostile areas or in certain situations where it's part of the story such as a boss encounter. When a battle does occur, the player is taken to a turn-based battle screen where they have several options to choose from: attack, magic, item, defend, and run. Battles are similar to traditional RPG games; however, there is an actual strategy involved where the player must keep track of enemy hit points because if they don't they may end up wasting turns doing an “overkill”. For instance, if an enemy dies at the hands of Aguro and is still targeted that same turn by Lufia, Lufia still attacks that spot even though the enemy is dead, resulting in a miss. 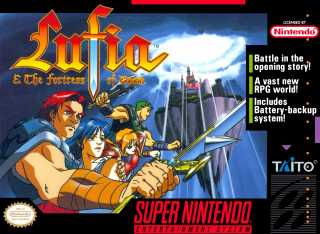