Orcs, dwarves, lizardmen, and various other factions face-off in a brutal sport (based on American Football) in Cyanide's adaption of the Warhammer-based Games Workshop tabletop game of the same name.
PlayStation Portable Xbox 360 Nintendo DS

Blood Bowl (not to be confused with the 1995 game of the same name) is a comedic dark fantasy strategy sports game developed by Cyanide and published by Focus for the PC on June 26, 2009.

The second official implementation of Games Workshop's tabletop miniatures game of the same name, Blood Bowl focuses on a deadly sport combining American Football with the fantasy world of Warhammer. Players compose a team from one of eight races (Humans, Wood Elves, Dwarves, Orcs, Goblins, Chaos, Skaven, and Lizardmen, each with their own unique playing style, special players, and tactics) and try to win by either scoring touchdowns or by killing the enemy team roster.

Along with the classic turn-based mode (based on the Fourth Edition LRB5 ruleset of the tabletop game), the game also features a real-time Blitz Mode similar to Cyanide's earlier unofficial implementation Chaos League. Along with standard exhibition matches, the game features an endless career mode where players gain experience (both online and offline) and improve their team's roster and abilities. Players can also customize their own leagues and tournaments.

The game received handheld ports to the PlayStation Portable and Nintendo DS in Europe on September 18, 2009, each lacking key features from the base game (including online multiplayer, Blitz Mode for the PSP version, and career mode for the DS version). The PSP version later received a North American release (by SouthPeak on April 13, 2010). The game was also ported to the Xbox 360 on November 27, 2009 (in Europe) and January 26, 2010 (in North America), removing some online features (including league support). The game was later ported to iOS and Android devices on July 30, 2014.

The PC version of the game later received two main revisions (Legendary Edition in 2010 and Chaos Edition in 2012), revamping the interface and updating the rules to the Fourth Edition CRP ruleset while adding over a dozen new team rosters (for a grand total of 23). Along with a full-fledged sequel in 2015, the game also received a spin-off variant in 2012 (titled Dungeonbowl).

At release there are two modes of play. The first is the Living Rulebook 5 rule-set based version to the letter of the law known as Classic Mode. The second is a real-time interpretation of those rules known as Blitz Mode intended for people who may not be interested in the complexity of the classic pen and paper version. The two play differently in both their gameplay and the season that encapsulates each match.

There are a number of concepts essential to understanding the turn-based gameplay of Blood Bowl's classic mode. Knowledge of the finer points of the concepts decide the game more frequently than die rolls.

At release for both PC and Xbox 360, there were eight total races all from Warhammer lore. Within a few months of the PC release, Cyanide added the Dark Elf faction as a free update for the PC version. While there are plans to bring the Dark Elf team to the 360 as well, it will be coming as a paid piece of downloadable content. After repeated delays, the Dark Elves DLC pack was made available on the Xbox Live Marketplace March 30, 2010.

Each race has a totally different line-up and is better suited to certain strategies for example Dwarves play a slow possession orientated game where they trudge slowly up the field stomping heads while building their offense into a watertight steamroller of an attack, they are terrible at the throwing game however and are the slowest team in the game. By comparison the Elves can play a very varied game with lots of passes, bluffs and feints until they open a gap in the lines to rush or throw in the touchdown. A weakness of the Elves however is their low armour value and high player cost making them a tough team to manage over a long season if players begin to get injured or/and killed.

The Chaos team has very little diversity at start, but gifts of mutation from the Chaos gods of the Warhammer universe can transform them into a fine-tuned machine. Their starting roster favors an aggressive, running approach that is not as strong as the Dwarf or Orc teams. Because of the knowledge required to tune the advancement properly, Chaos is not recommended for new players.

Believed to the the optimum Blood Bowl players, dwarfs are feisty, bitter, and likely drunk. Their compact frame and surprising strength make them the ultimate physical team. Even the poorest dwarf can afford a thick suit of armor, making them the most durable team on the pitch but sacrificing their movement and agility. This makes the dwarfs rely on punishing their opponents physically and running the ball. The team is one of the easiest to learn with and is commonly recommended for new players.

An odd mix of tiny goblins and massive trolls, the goblin teams are best known for the gobo toss. In this play a goblin basically teases a troll until the troll picks it up and hurls it as far as it can. The results of this play are rarely good. Goblins can also wield chainsaws, but considering the chainsaw is a large as the goblin itself, there are frequent mishaps on the field. This team is less about winning and more about entertaining the crowd. It is certainly not recommended for new players.

Supposedly the addition of humans to the Blood Bowl league brought in a new era of sophistication in teams as they were able to adapt to any opponent strategy and win. The human teams truly are able to field any strategy reasonably well but do not excel in any area. They field a wide variety of players, featuring solid blitzers, cheap linemen and great throwers. The weak spot on the team is the catcher, who lacks armor but only has slightly less mobility than the other races' catchers. While not the easiest team to play, they are good for learning the basics of passing.

Another odd mixture of stronger than average Sauruses and tiny but quick Skinks, the lizardmen are almost strong enough to push around the Orcs while nearly quick enough to keep up with the Skaven. The skinks are extremely easy to injure and therefor must be kept away from stronger players, but the Saurus can effectively dominate a front line. Because of the weakness of the skinks, they are not recommended for new coaches.

Similarly to humans, the Orcs can field a very diverse team. However, their focus is more on physically dominating the game than making plays with the ball. They are nearly as tough as the Dwarfs, but are faster which makes the much more well-rounded. The Black Ork Blockers are the cheapest strong unit and can dominate a front line in a single turn while their Blitzers are a great all-purpose unit. Their access to goblins and trolls lets them execute the gobo toss on a smaller scale. Sticking to the orcs and skipping the trolls and goblins makes them possibly the easiest team to play.

The pack of rat-men are known for having some of the quickest units in the game. Unfortunately they are also known for having some of the weakest units in the game. In addition to occasional access to Chaos mutation, skaven must rely on advancement to become truly powerful. They are however a great passing team, and are one of two teams that can score a two turn touchdown. Because of the weak units, skaven are not recommended for new players.

The most agile team in the league has chosen to sacrifice armor and strength in favor of speed and ability. While they can score quickly and easily from any part of the field, they suffer greatly in physical play. It is also extremely difficult to coax an elf out of the woods to play such a brutal sport, so their costs are naturally higher than other factions. The wood elf wardancers also give the team a more physical component for attacking ball carriers. While the wood elves aren't the easiest team to start with, they are a great team to learn the passing game with.

One of the more complex teams to play because they are primarily a running team without very much defense, but with time they can grow into a truly devastating force. They do not have a large bruiser like the other factions and their units are more expensive similar to the Wood Elves, but they get unique abilities such as Stab that can devastate an opponent. Additionally, they get black leather. Who doesn't like black leather? Because of the understanding of the rules required to succeed with the dark elves, they are not recommended for new players. 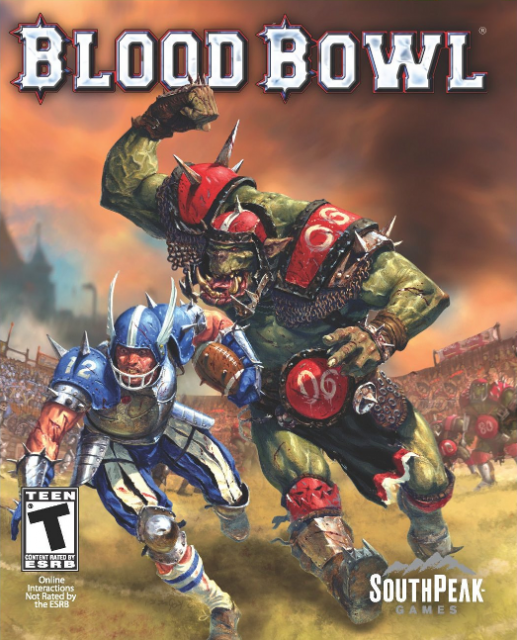