A game based on LittleBigPlanet for the PS3, developed for the PSP. It features most of the same platforming gameplay, creation tools, and sharing abilities.
PlayStation Portable PlayStation Network (PSP)

LittleBigPlanet PSP is the portable version of the PlayStation 3 hit of the same name. It was first playable at E3 2009 showing off two Australian-themed levels with similar gameplay of the console counterpart.

The game is developed by Sony Computer Entertainment Studio Cambridge in conjunction with Media Molecule, and was released November 17, 2009 in North America , November 20, 2009 in PAL regions, and December 3, 2009 in Japan.

The platforming style of the original console game returns in the portable version, although without multiplayer co-op. The travel around the globe level design also returns, with themes like the Australia Outback, China, Egypt, Arabia, the Alpine, Tinsel Town (based on Hollywood), and Brazil. Other returning elements are rotating platforms, switches, stickers, swinging, creating, and more.

Stephen Fry reprises his voice over role for the English version of the game.

With the limiting controls of the PlayStation Portable as opposed to the DualShock 3 Controller, changes had to be made to help adapt the game to the device. Also, some tools and options were completely removed.

Changing layers for an object is done by tapping L to toggle the object onto each layer until you get to the layer you want. Also, without a second analog stick to determine Sackboy movement from object movement, holding L and pressing Left/Right rotates the object and Up/Down scales the object.

Dark Matter (the material in LBP PS3 that stays in the air and isn't affected by gravity), is replaced with the ability to give any object a "static" property, thus making that object act like Dark Matter would.

There are graphical and process limitations due to the PSP's limited power. Corners are no longer well rounded, textures are not as detailed, explosions no longer destroy or partially destroy objects, small objects can no longer break when being crushed, and only the square or circle shape can be used to freehand.

Lighting tools are no longer present.

Stickers are limited as well. They can't wrap around objects or materials; meaning they can only be placed on the face of objects. Stickers also can't be placed on Sackboy, costumes, score bubbles, or the scoreboard.

There is no photo tool, thus no way to make custom stickers.

There are no Interactive Music tracks (music that you could set the volume of each instrument). Even tracks that were made interactive for the PS3 version, and ported to the PSP version, are no longer interactive.

It is also important to note that community levels must be downloaded to the PSP before becoming playable. 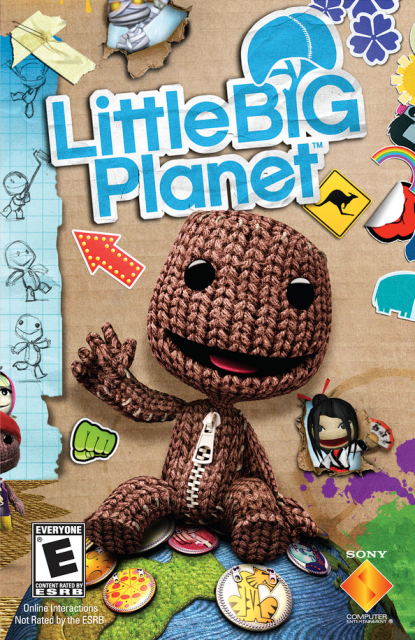