Time splits as A Crack In Time marks the end of the "Future" trilogy in the Ratchet & Clank franchise.
PlayStation 3 PlayStation Network (PS3)

Ratchet & Clank Future: A Crack in Time is the 9th installment in the Ratchet & Clank franchise, and the third and last game in the "Future" trilogy. It brings new improvements to the platforming aspects with new gadgets and mechanics, and keeps the combat fresh with new weapons and enemies.

The game features more Clank gameplay than the other games in the series, with his newfound time manipulation abilities. Also, Captain Qwark gets more screen time, due to his absence from Quest for Booty.

The end of the trilogy

The game answers some of the biggest questions about the franchise: Ratchet's origins, the Zoni, and what has happened to the Lombax race. The Future storyline is also the first time Ratchet & Clank games have had a story arc going across multiple games.

The first game in the trilogy, Ratchet & Clank Future: Tools of Destruction, began with the brave duo living peacefully in Metropolis, when they received a message from Captain Qwark saying that, once again, he is in trouble. They responded by running to his rescue. They soon realize that the city is being attacked by heavily-armed robotic commandos that work for a evil mastermind Emperor Tachyon. Tachyon wants to kill all the Lombaxes in the universe, and he has tracked down Ratchet who is the last of the Lombax race. Ratchet and Clank manage to escape from him and fly away into space. Then they go through the galaxy looking for Tachyon who is trying to take over the galaxy.

Along the way, they meet many characters who play important roles throughout the trilogy.

Some of the more important characters are:

The heroes eventually learn that Emperor Tachyon is a Cragmite, who are the sworn enemies of the Lombaxes. Ratchet also finds out that Tachyon wants to use the Dimensionator to bring back the Cragmites, who were thrown into another dimension by the Lombaxes. Ratchet eventually manages to defeat Tachyon and stop the Cragmites from taking over the galaxy.

But as Ratchet is busy with his own adventure, Clank meets mysterious creatures called the Zoni, who give Clank control over time and other abilities. Unfortunately, Clank is the only one who can see the Zoni, so Ratchet doesn't believe that they exist. The true intentions of the Zoni are unknown in Tools of Destruction; however, at the conclusion of the game, the Zoni kidnap Clank and the game ends with a cliffhanger.

The story is continued in Ratchet & Clank Future: Quest for Booty, the second entry in the trilogy. In Quest for Booty, Ratchet fights against space pirates alongside Talwyn to find out where the Zoni have taken Clank. At the end of the game, Ratchet finds out that the Zoni are somehow connected to Dr. Nefarious, the villain of Ractchet & Clank: Up Your Arsenal, who is back for revenge.

In Ratchet & Clank Future: A Crack in Time, Ratchet meets another Lombax named Alistair Azimuth; disproving that Ratchet is the last Lombax. General Alister Azimuth was a once-revered Lombax leader, and a friend of Ratchet's father. Alister desperately wants to rescue the other Lombaxes and will do so at any cost. While Ratchet is working his way towards the Great Clock, Clank learns of his past and where he came from. All the while Dr. Nefarious is attempting to use the clock to turn back time so the villains always win and Ratchet always loses. In the end, Ratchet and Clank are left with very important decisions to make that will effect their own futures, along with the future of their friendship.

The gameplay is still identical to the previous games in the series, with minor tweaks. One of the new features is the Hover Boots. These boots let Ratchet hover through the air and speed through the levels faster. They are also included in platforming puzzles as a substitute for the absent Clank. Another new aspect is the sense that this game is a little more open world than the previous ones. Traveling between planets now has Ratchet flying his ship and landing on smaller planets and moons to further explore and upgrade his arsenal.

Aside from the Ratchet adventure, Clank now has his own storyline to follow. It is a simple platformer with a bit of a time twist. Clank must maneuver his way through the Great Clock and his own mind by solving time puzzles. These have him creating recorded versions of himself to unlock doors, raise platforms, and more.

Ratchet & Clank Future: A Crack in Time has 19 weapons in total--including Ratchet's OmniWrench--and each one (except the wrench) can be upgraded five levels, making it incrementally stronger. On other play throughs, while in Challenge Mode, each weapon will have an "Omega" version which can be leveled up another five times. Bringing the total of each weapon up to level 10.

Ratchet now has Holo-Armor, which allows him to turn off his armor when he doesn't need it. Thus eliminating the problem many fans had with previous games, in that high end armor sets would cover Ratchet's face, making him look like a robot.

Another new gadget that he has is the OmniSoaker, which absorbs things from the environment and shoots it out again. For example, he can absorb nectar from plants, and use it to distract deadly bugs.

Ratchet & Clank Future: A Crack in Time had an extensive amount pre-order bonuses. Before the game's launch, you could find these items at retailers like Amazon.com, Best Buy, Game Crazy, GameStop, and other participating retailers.

A Collector's Edition of Ratchet and Clank: A Crack in Time is available only in Europe, and contains:

A number of people had encountered a bug when finishing the game that essentially corrupted the game's save file. The bug essentially happened when players were given the option to continue playing the game as it is or go into challenge mode to earn more bolts,and upgrades. The save would load and the game would freeze after a short while. The patch also addresses an issue some encountered with the Smuggler while attempting to get the Good Samaritan trophy. If you are one of the affected and still have the corrupted file, load it and press the following: Up, Up, Down, Down, L3, square, circle, square, circle, R3. The game will restart in challenge mode with all earned bolts, weapons, and upgrades, and you should be able to play through your second time with no real issues. 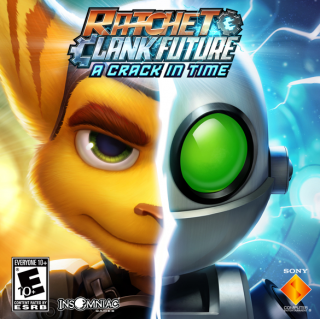