Ys I & II Chronicles is an enhanced re-release of Ys I & II Complete developed by Nihon Falcom that was initially released for the PlayStation Portable in Japan on July 16, 2009 and was eventually ported to the PC a few months later in December. The title is almost identical to the Complete edition of Ys I & II except for containing an option for a new borderless widescreen display, the ability to swap between three different soundtracks (the original PC-88 tracks, the Complete edition remix and a new arrangement made for Chronicles) as well as optional new character artwork.

XSEED Games published Ys I & II Chronicles in North America for the PSP in 2011 using a re-purposed and re-edited script from a fan translation previously created for the Complete version of the game. The company later released Chronicles on the PC as well under the name Ys I & II Chronicles+ in 2013.

A long time ago there was a kingdom called Ys and it grew and flourished under the protection of the two Goddesses. However, later in time the kingdom became known as Esteria and its divine history was disappearing. The only ones left that still worship the Goddesses are descendents of the one who once preached the Goddesses' will.

As time went on the people began mining silver from nearby mountains and things started to progress for the people. The people built towns and wildlife became more rich and plentiful but at the same time demons and monsters began to appear around them. Eventually there were so many monsters the people had to hide away in fear. Now, Esteria is known as a rumored land that is known worldwide.

The story starts with a young red-haired boy who heard about the rumors of Esteria and wanted to find out if the stories were true himself.

The game uses a system called “Bump System” where players just bump into the monsters to fight and defeat them. The strategy is to bump them from behind or off-center. If players attack from the front, they will deal less damage and also receive damage themselves.

In Ys II, players will eventually get magic and they can either press or hold the button to unleash the magic depending on what weapon or item they are holding.

One of the additions is the new and updated soundtrack called Chronicles, which is basically a re-work with real musical instruments. There are also two other soundtracks to choose from and one of them is the "Complete Soundtrack" which is the music released with Complete (PC) in 2001. The other soundtrack is the classic "PC-8801."

Players have the option to choose any of the soundtracks in the start menu at any time in the game.

Besides the entirely brand new character art done for the PSP called Chronicles, the player has the option to also choose Complete, which is the art used in the 2001 PC release.

The game art can be chosen at the main menu when either starting a new game or in the options menu.

The PC version of Ys I & II Chronicles includes features from both the PSP version and the older PC version Ys I & II Complete. You are able to play the game in a full screen viewport or use the classic framed view from Complete. 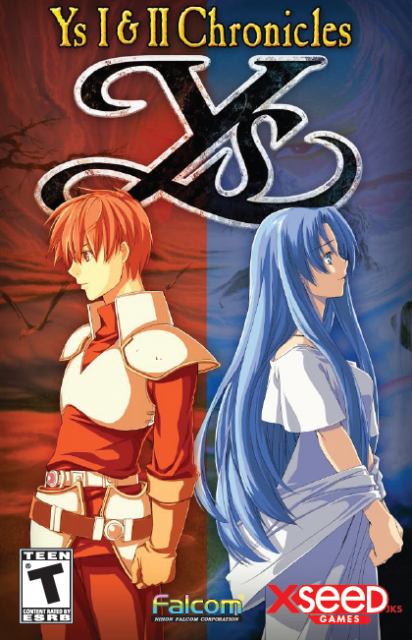