Plants Vs. Zombies is an action-strategy tower defense-style game developed by PopCap that tasks the player with surviving an onslaught of the undead by growing plants on their lawn.

Zombies are invading your home and the only way to stop them is by making use of your supply of undead-killing plants. You have a variety of plants at your disposal such as pea-shooters, cherry bombs, wall-nuts, and potato mines to name a few. There are different kinds of zombies with unique properties that attempt to cross the player's lawn. Earn an arsenal of 49 plants to stop the zombies from invading your home. The game features obstacles such as a setting sun, a creeping fog, and a swimming pool to make each level more challenging. This game plays similarly to a traditional tower defense game, but with the zombies marching in straight lines alone the lanes, allowing the player to block their path by putting plants directly in their way.

Plants vs. Zombies was originally released as a flash game on PopCap's website. It is also available as an installable game PC, Mac, and iOS devices. However, the versions available on iOS devices only contain Adventure mode and lack the modes available in the other versions. The iPad version of the game, named Plants vs. Zombies HD features higher resolution graphics over the iPhone and iPod Touch version. The game was released on XBLA on September 8th, 2010. The Xbox 360 version has been available bundled in a retail disk with Zuma and Peggle since September 28th, 2010.

Plants vs Zombies is a tower defense game. The player saves up resources (solar energy, or Sun) to buy and place plants on a 5x9 grid that represents their lawn. Zombies slowly move from the right of the screen to the player's house on the left. Unlike most tower defense games, the zombies generally move in a straight path along the grid. Over the course of the game, the player earns and buys additional plants. The player is only allowed to use a certain number of plants in a level. At the beginning of every level, the player must choose which plants to use. There are a variety of unique plants to choose from, ranging between multiple types of offensive and defensive plants.

The goal of the game is to prevent the zombies from reaching your home and eating your brains. Each level has a column of lawnmowers, pool cleaners, or roof cleaners that serve as a final line of defense. If a zombie manages to get through every obstacle in its way then one of the defenses is triggered and all enemies in that row are automatically destroyed. Their is only one defensive machine in each row and each one can only be used once per level. Lawnmowers are automatically given to the player, but pool and roof cleaners must be purchased from the game's shop. If a single zombie manages to make it past the final line of defense the player loses.

Players are awarded coins or diamonds at the end of the level, with bonus coins awarded for remaining final defenses. Zombies sometimes also drop coins. Coins can be used to buy new plants and other items from the player's neighbor, Crazy Dave.

Every ten levels, the game changes from day to night (and so on), requiring different strategies and plants that normally only work at night. Some night stages also feature a blanket of fog that hides a portion of the playing grid from the player. After 20 levels, the zombies make an attempt on the player's backyard, where they have a pool that spans the length of the level, requiring completely different plants to defend. The final set of levels has the player fighting zombies on the roof of their house where the player needs to buy flower pots to be able to use any plant.

Some levels in the game's Adventure Mode don't use solar energy or let the player choose which plants to bring into the level. These levels instead have a scrolling bar at the top of the screen where different plants appear in the form of a card. The player then simply takes the card and plants it whenever he or she chooses, without having to use the economic portion of the game. However, the unpredictability of the scrolling bar tends to make these levels more hectic than usual.

Other modes and levels change the game mechanics entirely, presenting the player with bowling levels, variations on PopCap favorites such as Bejeweled and Insaniquarium, or allowing the player to control the zombies in order to defeat the plants.

Economic Plants are the plants that add to the player's resource-collection rate. These plants spawn Sun points, which are then used to create more plants. The most basic of these are the Sunflowers, which spawn extra Sun during the daytime. Its mushroom counterpart, which is the Sun-shroom, sleeps during the day, but produces Sun at night. Instead of giving you solar-points, the Marigold flower gives you silver and gold coins.

Offensive Plants attack the incoming waves of zombies. In order to properly hold off the undead horde, one must use different offensive strategies depending on the situation.

Defensive plants hold off or divert the attacking swarm long enough for the offensive plants to cause heavy damage. They are best used in conjunction with other plants to ensure home safety.

These plants don't fit well within the offensive or defensive categories, but are nevertheless essential for surviving the zombie apocalypse.

Unlike the other plants in the game, upgrade plants are purchased from Crazy Dave's Shop instead of being earned through the adventure mode. They are displayed on purple cards and regenerate slower than the other cards. They are each planted on and thus enhance a specific other plant type,

Zombies are the evil menace whose sole task is to invade your home and eat your brains. Naturally, you want to keep your brain for your own use. All zombies can be destroyed through enough firepower, and when the zombie is almost dead, one of their arms will pop off to alert the player. However, zombies have devised cruel and foul ways to try fighting through your plant-ary defences. A number of different zombie types are listed below. Which plants will you use to hold off the horde?

A number of mini-games are unlocked over the course of the Adventure Mode. These include a bowling variant in which the player rolls defensive structures at zombies instead of building plants, and a more challenging variant of the main game where the zombie characters have a lot of the offensive capabilities that the player possesses, such as projectile attacks.

Puzzle Mode is unlocked after the completion of the Adventure Mode. Puzzle Mode include two different types of puzzles. The first requires the player to break open vases which can either include zombies or plants. The player must successfully break all of the vases and kill all of the zombies. There are 9 different finite levels and one endless. The second mode requires the player to play the role of the zombie and assault cardboard cutout plants. The objective is to break through the defences and consume 5 brains on the other side of the plants. This also includes 9 different finite levels and one endless.

The player can use coins collected during normal gameplay to purchase items. During the game's second chapter, a character named Crazy Dave will open his shop: Crazy Dave's Twiddydinkies. This allows the player to purchase extra items to make the game's demands a little easier on them. The most expensive items in the store are generally the extra seed slots, which allow the player to bring more types of seeds (and therefore have a bigger variety of plants) in a given level.

Other upgrades include upgraded versions of items that must be planted over existing plants; for example, planting an upgrade onto Repeater plants will cause them to fire four shots at a time instead of two. The cheapest upgrades in the store are generally temporary; for $200, a rake can be purchased for the next three levels that will appear randomly on the map and kill the first zombie to step on it.

Starts with two Marigold flowers that need to be tended. Additional plants are collected by playing mini-game, puzzle, and survival modes. All plants require regular watering and fertilizer to grow. These activities reward the player with small amounts of money and a larger amount if the plant reaches its full size. Once full-grown plants also require bug-spray and music to remain happy for a day. Doing so nets the player a fairly large reward. Apart from the standard Zen-Garden a mushroom garden, aquarium, and the tree of wisdom are also provided. The mushroom garden allows mushroom plant types to grow further and the aquarium does the same for aquatic plants. The tree of life grows as tree-food is placed upon it, handing out advice for every growth spurt.

The Xbox Live Arcade version was released on Sept 8, 2010 for 1,200 Microsoft Points. It features 50 levels alongside 21 mini-games and 7 different game modes. The retail version was made available on Sept 28, 2010 for $19.99 and includes two other games by PopCap: Zuma and Peggle.

The iPhone version was released on the 15th of February 2010. Whilst the game is ultimately the same game with touchscreen controls, upon release it had several missing features such as the Zen garden, various mini games, and survival mode which would be unlocked upon completion. A summer/fall 2011 update has added in most of the missing modes, but requires in-game or micro-transaction currency to unlock mini games.

Game of the Year Edition

On August 10th 2010 a game of the year edition of Plants Vs. Zombies was made available on Steam and as an automatic update to users of the regular edition. It added 20 new Steam achievements, support for Mac users, Steam Cloud support and a interactive zombatar tool which allows users to create their own zombies.

On May 19, 2010 Google announced at their I/O conference that they would be launching an app store for their web browser, Chrome. A flash version of Plants vs. Zombies was confirmed to be among the launch titles priced at $3.99 according to preview screenshots. The store is expected to be open by the end of October 2010.

On February 8th, 2011 the game was released on the PlayStation Network. This version is the same as the original game, including leaderboards and 12 trophies.

On January 18th, 2011 Plants Vs. Zombies was released on the DS. This version also includes the multi-player modes from the Xbox Live version and allows the player to play against another friend with a cartridge or to send a basic skirmish via Download Play. The game was also released on DSIWare on March 14th, 2011.

The game's soundtrack was composed by Laura Shigihara. 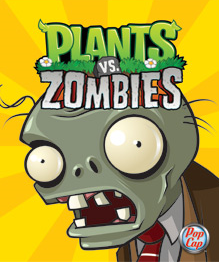