As Explodemon, a robot with a compulsion to blow up, fight off an invasion by evil aliens called the Vortex.
PlayStation Network (PS3)

In this new Curve Studios platformer, players take control of Explodemon, a robot with the power to blow himself up. The player must navigate through the levels and use Explodemon's unique ability in order to perform a variety of tasks that will allow him to move onward: destroy enemies and/or objects, throw himself through the air and solving environmental puzzles.

The developers have described the game as:

The game is available for purchase through the PlayStation Network. 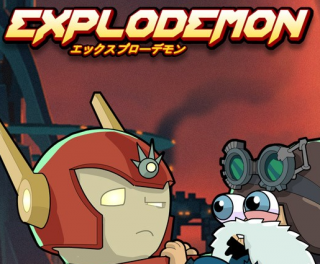