A multiplayer first-person shooter for the iPhone, developed by ngmoco. As of May 2012, the game is no longer available on the App Store and its servers have been shut down.

Eliminate is a first person shooter for iOS, set in the test facilities of a weapons manufacturer called Arsenal Megacorp. It pits players both against AI bots and Battle Drones, but also against other iPhone users in both CO-OP and Deathmatch gameplay.

Eliminate has only a nominal story at best. You play as an employee of Arsenal Megacorp, and your job is to test Arsenal's weapon designs against other employees, or the AI training bots. Recently swarms of "Battle Drones" have escaped into the facility and Arsenal is now also offering compensation for those who can take them down.

Eliminate employs a level based system in awarding unlocks. The game uses a shared currency/experience system. "Credits" are awarded after battle, and these allow you to rank up, purchase new gear, or upgrade existing equipment. Ranking up is essential to progressing in the game, as the starting weapons and armor, while adequate, are hardly very good.

Eliminate operates on the "free to play, with microtransactions" business model. Free to play players have access to all functional gear, only some temporary cosmetic upgrades can be purchased with "power cells", Eliminate's microtransaction currency. Each player starts off with a full energy bar, which depletes with every game played, with the exception of games against bots. When this bar is depleted no further credits (experience/money) can be earned until the bar slowly refills over time. (the bar refills at one game per hour) The only way to circumvent this limitation is by purchasing the aforementioned powercells, which can give immediate refill to energy.

In Eliminate, control of your character is handled somewhat similarly to console first person shooters. The game uses two invisible virtual joysticks to control movement and aiming; the left joystick controls character movement, and the right joystick controls aiming. Shooting is accomplished by tapping the right joystick, sustained fire is attained by tapping and holding. It is still possible to aim while continuously firing. Tapping the top left corner of the screen and you bring up the scoreboard, hit the top right once to switch weapons and twice to manually reload. Tapping the center of the screen zooms in and tapping the bottom jumps.

Eliminate's deathmatch gameplay is fairly standard, and similar to quake or quake live. Four human players or one human player and 3 AI bots are spawned into an arena, where they shoot at each other either for three minutes or until one player has ten kills. Poweups are a big part of Eliminate Deathmatch, and using them right is absolutely essential to victory. Upon death each player drops a health recharge powerup and some credits which can be picked up by anyone. Stages are large multi-level affairs and can incorporate water as well as other environmental hazards, so mobility around the environment is definitely important.

Recently ngmoco has released a co-op gameplay mode for eliminate. This mode pits two players against seven waves of Battle Drones, with two "Boss waves" included. There are no powerups on the maps, the only way to obtain these is by killing Battle Drones. The two Boss waves in each map will have you fighting an extra strong set of conventional gear, the last wave is always a Boss wave, and wave four is also usually a Boss wave. Compensation is awarded at the end of each map based on how many waves you defeated, an extra bonus is awarded if you beat them all. This mode also introduces a loot drop system to Eliminate; in addition to powerups and credits, Battle Drones will also drop loot suitcases full of temporary use items. Friendly fire is off in CO-OP mode, though your projectiles will still explode if they hit your CO-OP partner and may injure or kill you.

Weapons can either be purchased with credits, or rented for a smaller amount of credits. All weapons can be upgraded.

Weapons and prototype weapons are easily purchasable from the weapon shop. Sometimes special, limited edition weapons are made available for a limited time.

This is the Auto-Rifle. Even though it is only the starting weapon, the Auto-Rifle can be extremely powerful if upgraded. Fires fully automatic, preferred sniping weapon due to accuracy and stealth (no bullet trail to give you away). Not so good if you can't aim.

This is the Dual Cannon, Arsenal Megacorp's version of a shotgun. This time with plasma. Fires shotgun style plasma bursts, good for close range. Not a preferred sniping weapon.

This is the Antimatter Jet. The Antimatter Jet fires spheres of antimatter which slowly bounce around and explode with splash damage if they hit a player. Be careful with these, it's easy to blow yourself up with this thing. Good for laying down a wall of fire, aka area denial. Not so good for small rooms.

This is the Rocket Launcher. This baby fires out two concentrated packages of awesomeness, or in layman's terms, rockets. If you can predict where people will be when your rocket finally arrives, this thing will be your best friend, but if you can't, your best bet would be to get in close and take them with you.

This is the Vaporizer. It is pretty much a giant laser, ready to fry anything you point it at. Even though the slight firing delay makes aiming somewhat difficult with good aim this is one of the most deadly weapons. Good if you like the smell of fried circuitry, not so if you have a problem aiming.

This is the Hurricane Jr. It was a promotional weapon and is not now currently available. Basically this is a chaingun. Good if you like shooting for extended periods of time. Not so good if you value efficiency in your kills.

This is the Hellfire Jr. Also a promotional weapon, this is a high damage, initially one-shot grenade launcher. Also has one of the longest reloads in the game. Good if you like seeing enemies fly everywhere, not so good if you hate extended reload times.

Eliminate also allows users to buy and customize different armors, each with their own characteristics. Similar to the weapons system, armors are also upgradeable, and prototype armors are also available for lease. Armors have characteristics in Shielding (lessens damage you take), Targeting (increases your damage output), Speed (self explanatory), Jump (also self explanatory), Aquatics (improves swim speed), and PowerUp (Increases power up effectiveness)

Eliminate also allows the user to purchase cosmetic skins for their armors. Skins that pre-upgrade your armor are also available for lease.

There are currently 13 stages available for Eliminate, all are playable as deathmatch stages, and four are playable in CO-OP 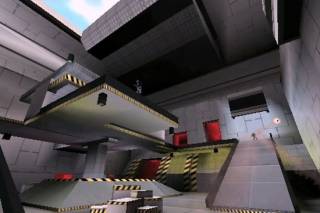