A first-person shooter where players shoot hordes of relentless monsters while trying to save Earth from Mental and his forces.
Xbox 360 Games Store

Serious Sam: The First Encounter is a first-person shooter developed by Croteam, a small developer based in Croatia. The game stars Sam "Serious" Stone, a super strong, super bad ass warrior from the future. It is the first half in a two "encounter" series where the second one is Serious Sam: The Second Encounter. Serious Sam is one of the few games to successfully feature arcade-centric first person action in a 3D environment after the arrival of sophisticated, more slowly paced first person shooters like Deus Ex, System Shock 2, and Half-Life. Games analogous to it's style of gameplay are the Doom and Quake franchises. Although simple at face value, the game has a lot of substance and does the few things it does well, which has allowed it to garner numerous critic's awards. Humor is a large part of the game and it's exaggerated nature often parodies many staples of video games such as floating weapons and spawning enemies. The character of Sam is often seen as a parody of Duke Nukem. Another staple of the franchise is the way it lures the player into picking up a lone health or ammo box that spawns enemies that you have to fight as a punishment for picking up the bonus.

The story starts with Sam "Serious" Stone, a super warrior from the future who fought bravely against any force. Unfortunately for us the future is full of chaos and war thanks to Mental. As it turns out, humans in the 21st century have uncovered ancient technology left behind by an older civilization than ours. This has allowed us to travel across the universe and expand. In the year 2104, monsters attacked humanity and just couldn't be defeated. So mankind decide to use the "Time Lock", which is an ancient time travel device left behind by that oh so helpful ancient civilization, that can send back one person. That person is Sam. Serious Sam is the only person who can stop Mental in the past and save the future. Upon arriving in Ancient Egypt, his journey begins.

Serious Sam is mostly known for its intense, wide-spread action. A big part of that is it's notorious enemy count. The game often throws at the player tens, and sometimes hundreds of enemies at a time to fight. In order to fight these monsters and not be boxed in, open courtyards and vast indoor areas are the types of places the player will encounter. A running joke in the series is the complaint of Sam himself that he runs backwards too much. Running backwards is often the only way to survive and kill the oncoming horde. Weapons play a key role in this formula. A wide mix of sci-fi and military based weapons are scattered across ancient Egypt for the player to pick and use. Health and ammo are often found in the world but become less frequent if played on a higher difficulty.

Sam isn't alone on his journey. He is accompanied by a sentient computer program embedded in his brain. It's female which is alluded to throughout the series. NETRICSA stands for NEuro-TRonically Implanted Combat Situation Analyser. She analyzes the situation and gives in-depth information on the locations, strategies and tactics, weapons, and enemies. She also keeps a detailed log of statistical data from enemies killed to secrets uncovered.

As you might have guessed, the game takes place in ancient Egypt. Sam fights through numerous courtyards, villages, and open areas of desert. The game has the player fight in famous locations in Egypt like Memphis, and encounter famous landmarks like statues, monuments, towers, and pyramids. The indoor areas are detailed in traditional Egyptian aesthetic. To the average person, it's pretty much Egypt.

Serious Sam couldn't be Serious Sam without some serious weapons. A wide variety of weapons are available to Sam throughout his journey. Starting with his trusty military knife, he moves on to revolvers (with TMAR ammo replenishing technology) that allow the player to always have a longer range option even if he runs out of ammo. From there he gets shotguns, machine guns, a rocket launcher, a portable cannon, and much more. Here is the full list with in-game names:

The monsters fought in Serious Sam are various aliens and creatures from around the universe sent back in time to kill Sam. Some of them are creatures that have been recruited to fight for Mental in return for a reward. Some are of Mental's own creation. They spawn all throughout Sam's journey while some are in their locations waiting for him. Since they aren't very smart, they come at Sam in mobs, while some stay at a distance and shoot at him. Here is the full list of enemies with in-game names (with threat levels in parenthesis):

Croteam has stated that there may also be a PSN version coming later if they can garner enough interest. 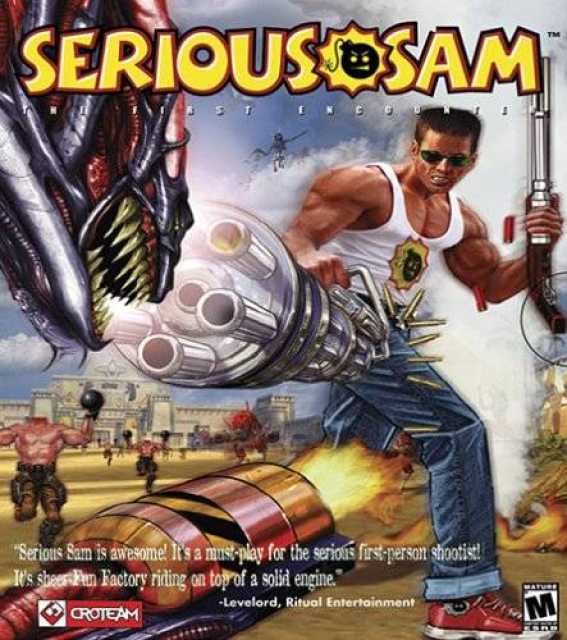