Toy Soldiers is a downloadable strategy game on Xbox Live Arcade. Players can control miniature representations of soldiers, weapons, and aircraft to attack and defend against an opposing force.
Xbox 360 Games Store

Toy Soldiers is Signal Studios' first developed video game released exclusively to Xbox Live Arcade's 2010 spring program, the Block Party. It is a tower defense style game that takes place in multiple World War I-themed dioramas inside a bedroom. Each set has British and German armies battling against each other for supremacy. Each force has a set of tanks, machine guns, planes, and explosives that can be used to defend attacking forces or remove opposing weapons.

In both single player and multiplayer, the player must fend off enemies who seek to invade the toy box. After a set number of units invade the box, the battle is lost and the player is forced to restart that particular mission.

The player can build, upgrade, repair, or most of the time control units. As with most strategy games, building, upgrading, and repairing each cost money. However, controlling weaponry and destroying enemy units awards you money, and killing many enemies quickly will award you even more money.

The multiplayer skirmishes are playable by two people in either split screen or over Xbox Live. The players are able to create attack plans while simultaneously defending their own toy box from the opponent. Certain battlefields are more unit-focused, where the gameplay centers on movable units like tanks rather than the immobile turrets. Five maps are available to play on.

The gameplay only offers the possibility to change the controls to inverted inside tanks, planes and the gun placements leaving the general camera and sniper tower to normal controls only.

This mode generally follows a tower defense approach, with access to playable units such as planes and tanks later on in the campaign.

The campaign follows different scenarios named after real life World War I battles. Such as the Battle of Polygon Woods, or the Battle of Ancre. The campaign offers the perspective of the British army and later the Germans. The campaign levels consist mostly of holding off various enemy waves and sometimes resolving in a boss fight. The bosses include the Tsar Tank,  a zeppelin, an "Uber Tank" and a giant rail-gun. Bosses can destroy the toy box regardless of enemies invaded.

Four levels of difficulty are available, from casual to elite. The hardest difficulty forces the player to directly control their units one at a time, but with more lenient victory conditions.

Players are awarded ration ticket items such as cigarettes and coffee for completing bonus objectives in each level. These items are displayed in the menus, but do not give in-game bonuses.

A full list of buildable units and their descriptions can be found here.  Units are upgraded during gameplay, and the upgraded models of units are earned through completing missions.

Toy Soldiers does not seek to be an incredibly accurate replication of actual battles from World War I, and as such, there are some anachronisms present. Vehicles employed in the battlefield are occasionally fictitious, and in some cases, are employed by the wrong European power. For example, the Tsar Tank is used by the Germans (and if Campaign is completed, the British will also use it), though the tank was only ever used by the Russians. The 'Little Willie' tank also appears in the game, despite the fact only one of these vehicles was ever made, and the 'Big Willie' also appears in use by the Germans, despite being a British design. 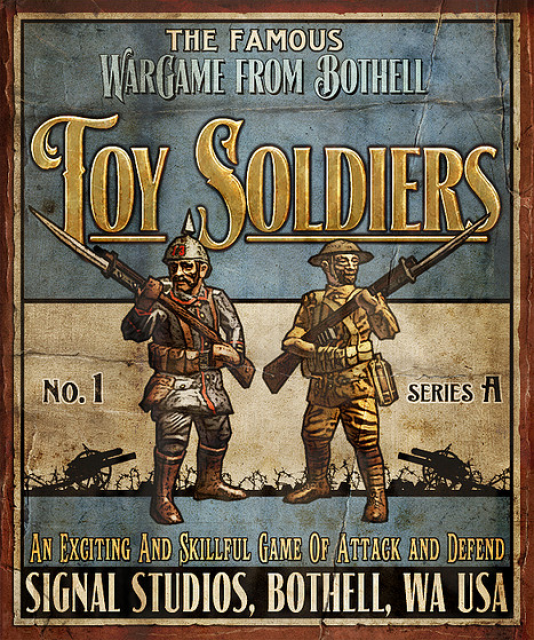