PlanetSide 2 is the sequel to the 2003 MMOFPS PlanetSide from Sony Online Entertainment which remains one of the most notable and successful games in the genre.

PlanetSide 2 is a massively multiplayer first-person shooter that focuses on massive scale combat with battles taking place between thousands of players. Players have access to air and ground vehicles and wage war in open fields, tightly packed urban centres, and enormous structures.

Player progression and customization are major features of the game, and players are able to unlock combat roles by advancing through skill trees, including several classic roles from PlanetSide. Players are able to switch back and forth between roles they have unlocked using a new class system, replacing the old, open-ended inventory system for a more modern and streamlined kit outfitted along the lines of the chosen class, much like in Battlefield 3.

The Terran Republic is an authoritarian government that uses its military might to maintain strict control over the colonial citizens. They are obsessed with the preservation of law and order and are therefore seen by some to be an oppressive force. However, many view the Republic as the only hope for lasting security on Auraxis.

The New Conglomerate operates as a band of dissidents that are opposed to the power that the Terran Republic has on Auraxis. Led by an unusual group of outcasts, industry titans, pirates and former military leaders, the New Conglomerate has found itself with significant power of its own, and is prepared to achieve their goals by any means necessary.

Vanu has taught that only through advanced technology can humanity evolve to its next state of existence. The Vanu Sovereignty is extremely advanced, frequently using powerful alien technology on the battlefield. Their sole purpose is to uncover the secrets hidden away in ancient artifacts scattered over the surface of Auraxis, and they will destroy any group that interferes or threatens the world they seek to study.

A unit with nearly no armor to protect it, relying instead on cloaking technology and sniper rifles to assist it in reconnaissance and sabotage actions.

A lightly-armored unit with jump jets and a lightweight rifle for quick movement and vertical agility on the battlefield. This unit also carries deployable ammo packs, in order to provide the ammunition required for whole squads to sustain longer engagements with the enemy.

A unit with a tool to heal others around them, and able to take the fight to the enemy with light rifles and armor, akin to the Light Assault class. Medics keep others alive and revive fallen players, aiding in keeping the men and women around them in good condition, no matter the odds stacked against them.

A unit with light armor and basic weapons for infantry assault, these units specialize in field repairs of vehicle and MAX armor, as well as being able to deploy various offensive and defensive force augmenters such as mines and stationary manned turret emplacements.

A unit with most man-sized weapons available to them, these soldiers not only have the heaviest armor of normal infantry, but also can use the hardest-hitting weaponry, including infantry-based anti-tank weaponry. To increase the survivability in a sustained fight, the Heavy Assault can activate a shield that will absorb damage for a short time.

A large exo-suit unit with massive armor and two arm-mounted heavy weapons, the MAX units act as the anchor for any infantry assault, against enemy infantry, armor, or air. These units are built like man-sized walking tanks and are the dealers of death, though their lack of agility can leave them extremely exposed if not supported by friendly forces.

Jungle and wetlands rule this place, with colored crystallites scattered around and broken open to the uncaring world of the ongoing war around them. Heavily forested zones make for a lot of cover from air vehicles and difficult for larger, more cumbersome land vehicles to navigate easily.

A land forever entombed in a harsh winter, this cold land is home to mountainous and rocky terrain covered in a white glaze of fresh snowfall. A desolate place from the biting cold, there is little in the way of flora to hide among or behind, and as such will likely be dominated by aircraft.

A desert continent, this map is home to a lush plateau in the north leading down into severe and crevassed terrain, as well as large desert plains. The main open spaces makes this map a prime place for vehicular assaults and transport.

Weapon and vehicle pools are broken up into the “common pool” and “empire-specific” groupings. Common pool weapons and vehicles are available to all who have the skills for them, meaning that they tend to be highly specialized or fairly average because of the fact that every empire can access them. Empire-specific weapons and vehicles, however, are unique to their empire and not available to those of the opposing factions. These tend to take on the characteristics of each empire and add flavor to them unique from each other.

For example, the common pool light tank, the Lightning, is something that anyone who has unlocked the skill for light armor can use. It is very nimble and has fire-power approaching the larger tanks, but its light armor prevents it from withstanding too much damage in a fight with anti-tank weaponry or larger main battle tanks. If one were to skill into heavier armor, a player of the New Conglomerate could access the Vanguard, the most heavily armored and most powerful of the MBTs, but also quite slow; a player of the Terran Republic would have the Prowler available to them, equipped with a multi-barrelled turret and overall the quickest of the MBTs, sporting medium armor; a Vanu Sovereignty player would use the Magrider, the most overall manoeuvrable MBT, using anti-gravitic generators to float over land and water, allowing strafing like no other tank could accomplish with treads, as well as a straight-line (meaning no real projectile drop over distance) plasma cannon that is attached directly to the chassis of the tank itself.

PlanetSide 2 has been developed and launched as a free-to-play (F2P) game, unlike the original which was built as a subscription-based MMO. While the Station Cash store is available in-game, the designers have no intention to provide “pay-to-win” advantages for real money. In addition to “sidegraded” weapons and ammunition for certain consumable items, the store contains customization options for guns, soldiers, and vehicles that can be acquired only with Station Cash, Sony Online Entertainment’s virtual goods currency.

Starting in late June/early July 2012, an invitational beta began with priority access given to original PlanetSide veterans and those with a key from the April 2012 edition of PC Gamer.

On June 5, 2013, Sony announced the Planetside 2 would be coming to the PS4. This along with Warframe and Blacklight Retribution will not require a Playstation Plus subscription and will be available at the PS4's launch. 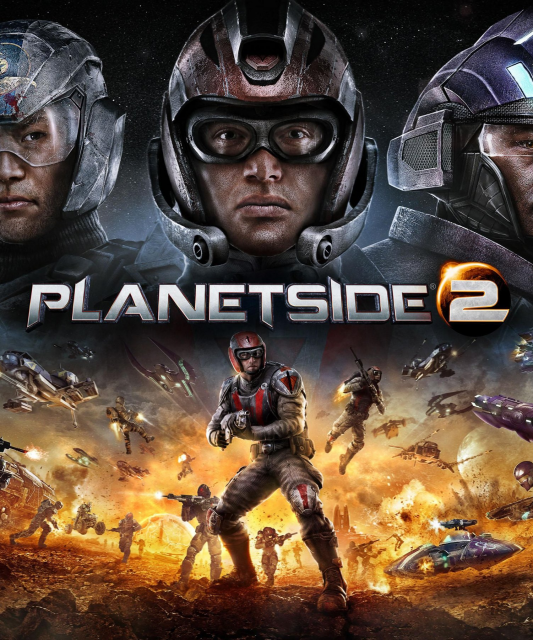