Super Mario 64 was a launch for the Nintendo 64. Developed by Shigeru Miyamoto's team at Nintendo EAD, it was released alongside the console on September 29th, 1996 in North America. The game pioneered many elements of the 3D subgenre of platformer. The game sold over 11.8 million copies worldwide and was also one of the first N64 games available for the Wii's Virtual Console collection of retro releases.

The plot of Super Mario 64 starts off with Mario arriving at Princess Peach's castle at her invitation and promise of cake. However, upon arriving, he finds the castle nearly deserted and learns that the evil Bowser has once again abducted her. In order to stop Bowser and rescue the princess, Mario must explore the worlds within a series of paintings hanging in various rooms throughout the castle and collect the power stars hidden in each. Only once he has the necessary stars will he be able to face off against Bowser and save Peach.

Super Mario 64 takes the core concepts of the 2D Super Mario titles and applies them to a 3D space. The player takes control of Mario and runs, jumps, swims, and flies through the games various stages in order to complete challenges and collect power stars. The game uses Peach's castle as a hub world; within the castle, there are paintings that transport Mario to various worlds that contain power stars. As the player collects more power stars, more regions of the castle become available with new paintings to explore. By ultimately collecting enough stars, the player is able to access the final level in which Bowser resides for the final showdown.

Mario's movements are controlled using the controller's analog stick. Gentle tilts of the stick cause Mario to move at a walking pace, while tilting further causes him to break into a run. Pressing the A Button allows Mario to jump, and for the first time in the Super Mario series, he can perform actions such as a wall jump, a jumping backflip, and a running triple jump.

Super Mario 64 was an early example of a game that offered the player manual control over the camera. The C Buttons on the N64 controller could nudge the camera to provide a better view of the action, while the C Up button zoomed the camera in to view the world from Mario's eyes.

Lakitu, a character commonly seen in the Super Mario series as one of Mario's enemies, has a new role in Super Mario 64 as the game's cameraman. At times when the player is viewing Mario's reflection in a mirrored surface, Lakitu can also be seen behind him, holding the camera if the viewing angle is right. This is justified in game with Lakitu being a reporter for a popular news station who's covering the Princess's kidnapping. A similar scenario would be presented years later in Mario Kart 8 with various Toadstools covering the race events for a similar organization.

Super Mario 64 excludes many of the franchise's classic items, such as the super mushroom and fire flower, in favor of special hats that give Mario unique abilities for a limited time. These caps include the metal cap that make him invulnerable and able to walk on the ocean floor, the vanish cap that allows him to pass through certain barriers, and the wing cap that lets him fly.

However, some classic Mario items do make a return. These include the 1-up mushroom, Koopa shell, and collectible coins, though the functions of coins and shells are different compared to previous Super Mario games. In Super Mario 64, Koopa shells are rare and can be used to surf across the ground and destroy enemies, while collecting coins can restore Mario's health gauge. There are also three types of coins, yellow, blue, and red, worth one, two, and five health points respectively. Additionally, each world contains eight red coins, and collecting all eight during one visit earns Mario a power star.

A unique attribute of the 1up Mushroom is that it will always follow and fly to the player after they trigger it. This would spawn a minor youtube sensation years later where players would trigger a 1up Mushroom and then attempt to complete a challenge without being hit by it.

Shigeru Miyamoto began work on a 3D iteration of the Mario franchise after working on Star Fox for the Super Nintendo Entertainment System. For a time he considered developing it for the Super Nintendo, but later decided to develop it for the Nintendo 64 due to the limitations of the SNES's hardware. The team spent many of the first months developing the camera and how the gameplay would work.

Originally the game levels were to be linear, but it was later decided that they should be open, free-roaming environments. However, the concept of linear levels can still be seen in final game in the Bowser levels, which require Mario to traverse a set path of obstacles to reach Bowser's lair. The development team prioritized making Mario's movements feel fluid and natural.

Before any levels were created, they tested his movements in a simple grid level which featured a golden bunny named "MIPS". This character later made an appearance in the final game. When the levels were finally designed, they incorporated more puzzles than was typically associated with Mario games. This is probably because The Legend of Zelda: Ocarina of Time was in development at the same time but was not released until years later. Some of its puzzle ideas were likely incorporated into Mario 64.

The soundtrack to Super Mario 64 was composed by renowned Nintendo composer Koji Kondo. It was first published by Pony Canyon in Japan on July 19, 1996. It was later published in North America by Nintendo on November 1st, 1996.

Super Mario 64 is one of the most critically acclaimed and commercially successful video games of all time. It was the top selling Nintendo 64 game and is the second highest selling Wii Virtual Console game. As of the end of 2007, it has sold 11.8 million copies world wide. The game is often praised as having revolutionized the 3D platformer and for pioneering many of the key gameplay concepts used in modern platforming games.

A remake of Super Mario 64 entitled Super Mario 64 DS was released for the original DS handheld on November 20, 2004. The game is faithful to the original version and contains all of the original levels. Additions made to the game include a variety of new minigames, as well as the ability to play the game as Luigi, Yoshi, or Wario. 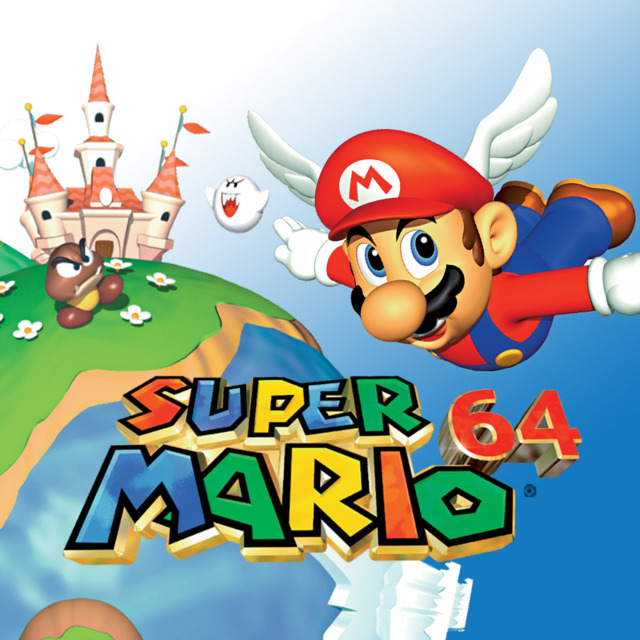