Serious Sam: The Second Encounter is the more robust continuation of the original Serious Sam: The First Encounter. This is not an expansion but the second part of a larger two part game in which the second encounter builds upon the first. The game features Sam "Serious" Stone on another adventure through more varied environments than the first. The game is broken up into three different sections in this game as opposed to one main location in Egypt in the First Encounter. He runs (constantly) fighting against a very large number or various alien enemies. The series is known for it's insane amount of enemies and it's gigantic bosses. The second encounter was released in 2002 which was a time when many complex and deep first person shooters on the PC had been released like Deus Ex, System Shock 2, and Half-Life. The game itself has been often described as an arcade first-person shooter much like the older Doom or Quake franchises. However it's simplicity is where the meat of the series resides. All the game has you do is shoot enemies and get to the end of the level but it does the few things it does well which has allowed it to receive top editor awards. Serious Sam is also notable for it's humor and parodies. Many see him as a parody of Duke Nukem and the game a parody of other first person shooters.

Sam "Serious" Stone is a warrior from the future that is sent back in time to stop Mental and save the future. In Sam's time, Mental has wreaked havoc on humanity and humanity decided to use the "Time Lock" which is was an artifact left behind by the Sirians that can send one person back in time. The Sirians were an ancient civilization that were around before humans and disappeared on Earth. Luckily they left their technology behind, which allowed mankind to travel across the universe. Unfortunately Mental's minions were waiting. After fighting through ancient Egypt and killing Ugh Zan III (one of if not the largest boss in all of FPS's history), he gets a Sirian saucer and heads straight for Mental. However some of his "fans" accidentally bumped into the saucer and knocked him down somewhere over Central America. This is where the game starts.

From there Sam travels through the jungles of ancient Central American civilizations that are filled with Mental's minions ready to stop you. It's your job as the player to kill them all and obtain artifacts that lets you continue on your travels. After that he ends up in ancient Mesopotamia and eventually the Tower of Babel. Conquering all before him he arrives in Medieval Poland and then finally transported to a network of Christian courtyards and finally a cathedral. There he fights a wizard who's been knocked on the head and speaks in Latin who summons Mental's minions. As it turns out, the cathedral houses a rocket that Sam launches into space once all are defeated, except Mental.

Serious Sam is known mostly for it's intense action that is had over large areas and features often tens or hundreds of enemies at a time. Not to mention there are enemies that tower over 20 feet. The nature and pace of the game means that in order to survive, the player must run backwards a lot to avoid enemies and still be able to eliminate them. Sam picks up his arsenal as he travels across various levels in each section of the game. At the end of the section (usually featuring a large boss), he loses his weapons and must collect them again in the next section. However the sections are long enough where it doesn't seem tedious that you have to collect them again. It also makes finding the weapons fun in different locations.

Sam isn't alone on his journeys. He is accompanied by a female sentient program implanted in his head named NETRICSA. She was with him during the First Encounter as well. It's short for NEuro-TRonicallyImplanted Combat Situation Analyser. It's an in-game menu mechanic that gives the player in-depth (and sometimes no so in-depth) information on his surroundings. The player accesses NETRICSA by double clicking the right mouse button as a default and a menu arrives with sub-menus for enemies, weapons, tactics, statistics, and strategy. Tactics is advice and strategy is general information about the various locations that can help Sam such as information that the gravity in the area is different. The player can also scan certain things in the game for NETRICSA to give him more information. She usually prompts you in-game when you have a new message. Although she speaks later in the series, she speaks with text and can bring some humor to the game.

The setting of the game is characterized by courtyards, halls, monuments, and various buildings left behind by the different civilizations in the game. The courtyards are open areas that fill with lots

of enemies. The start of the game has you fighting in Mezoamerican rain forest and through Mayan/Aztec buildings. All the locations of the game are vast, open, and big. They mix natural and built environments. It doesn't seem empty however because of the general scale of the buildings inside that space. Enemies also fill in some of that space. The second section is characterized by Mesopotamian locations and more courtyards. Iconic landmarks can be seen throughout the series from the pyramids and monuments of Egypt, to the pyramids of the Maya, the tower of Bable, and enormous cathedrals. Medieval Poland is characterized by wintry weather and more strangely (and the obligatory) lava section. The last sections are simple and long rectangular courtyard sections packed with enemies.

Lots of enemies require lots of firepower and there is much to be had in Serious Sam. The second encounter adds the serious bomb, flamethrower, sniper rifle, and chainsaw to the original line-up from the previous encounter. The revolvers in the game have advanced ammo replenishing technology (TMAR) that allows the player to never be out of a long range option. They can also be duel wielded. The full line up in the Second Encounter (in game names:

Arguably the most well known aspect of Serious Sam is it's insane enemies. Mental can be very creative when it comes to concocting and recruiting enemies to stop Sam on his journey. Enemies recruited to fight are often given something in return for their services, for some being magical powers which are just used to fight Sam anyway.

Smart enemies they ain't, but who needs to be when there's hundreds of them. Each enemy has it's own attack pattern that Sam can and must learn to survive and best his foes. Enemies range from easy to insane and each situation requires different strategies. Enemies include headless zombies, skeletal horse things, bipedal walkers, demon-looking monsters and much more. Each type of enemy has varieties except for a select few. Here is the full list of enemies with in-game names (with thread levels in parenthesis.):

A fun little side quest the player can partake in is the search for secrets. NETRICSA keeps count of these and you can get them all except one at the very beginning in which there is a statistical error that maps a secret to the intro title sequence in which the player has no control. Outside of that the game is full of secrets to discover. Many of these secrets can be miniscule like a lonely healthpill, some mega health or armor, and some can be entire levels. Many secrets are risky because obtaining them can spawn enemies which is your "reward" for finding it. A popular secret feature is that of the discolored wall section in which a square in a wall is slightly discolored indicating it can be destroyed and houses a secret. Secrets are also a source of humor in the game. A humorous secret features Sam finding a red phone booth in the middle of ancient civilizations where using the phone gets you a funny scene of dialogue.

Serious Sam also has a multiplayer mode where players can join a server and just kill each other. The game also features a now popular mode but then rare single-player co-op over the internet. Up to six (or eight) can join a co-op server and play through single-player levels. If one player dies, he simply repsawn which makes the game less intensive and more relaxing if you're playing with buddies. The game normally features deathmatch. In the single-player game, you as the player could only play as Serious Sam. In the multi-player mode players can choose from a variety of models including a pirate, boxer, and a upright kleer skeleton. The game comes with a multi-player mod called Seriously Warped deathmatch.

Croteam, the developers, have often displayed the strength of the Serious Engine which is the engine that powers Serious Sam. The engine is capable of computing hundreds of enemies on screen in large environments. An option in the game allows the player to enter a Mayan pyramid filled with rooms featuring various objects that display the capability of the engine like specular lighting, fog, and textures.

Serious Sam once installed comes with a freely usable engine editor. The editor can allow more technically skilled players (and newbies too) to learn the tools and create their own content. Content created includes levels for single or multiplayer, weapon mods, enemy mods, and other things. The Serious Editor has been a popular feature found in Serious Sam: The Second Encounter.

In order to better spread the gospel of Serious Sam, Croteam commissioned Devolver Digital to graphically update the original two games for the modern age. In doing so they can apply the Serious Engine 3, modern network code, and achievements. Being priced at $20 and lower, the two games are worthy holdovers until the next game in the franchise can be released.

This version has a few new modes that might make this a preferable alternative to busting out the old copy of the game. The game is very much rife with secrets and 15 new ones have been added bringing the total to 130.

You are able to play in a survival mode where waves of enemies will attack in unique survival maps. You can also play this mode in co-op. However, only online multiplayer is available, completely scrapping the popular splitscreen option of the original PC game.

Beast Hunt and My Burden are of these new modes. To rectify the spartan setup of the original, modes such as Team Deathmatch, Capture The Flag, and Last Team Standing are also included. This is also online only. 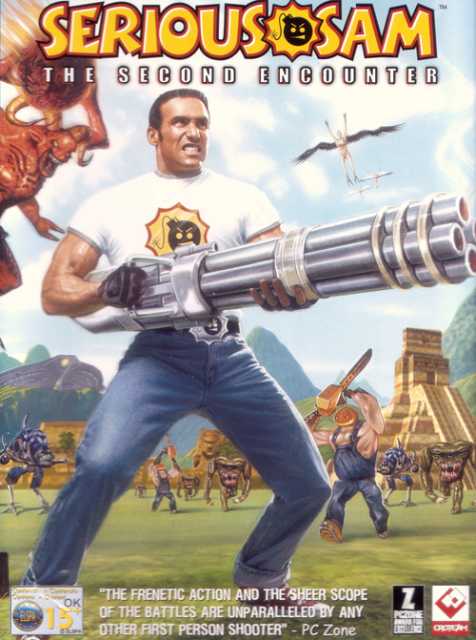