Recreating the thrill of Hong Kong action movies, Sleeping Dogs is an open-world crime adventure that tells the story of undercover officer Wei Shen as he infiltrates a notorious Triad organization in the streets of a fictional Hong Kong.

Sleeping Dogs (known in Japan as SLEEPING DOGS: Hong Kong Secret Police) is a crime-themed open-world third-person action-adventure game developed by United Front (in conjunction with Square Enix London) and published by Square Enix for the Xbox 360, PlayStation 3, and PC on August 14, 2012.

Set in the streets of a fictional version of contemporary Hong Kong Island, players control Wei Shen, a Chinese-American police officer sent to infiltrate the ranks of a notorious Triad organization known as the "Sun On Yee". Along with the standard gunfights and vehicle driving of other open-world games (such as the Grand Theft Auto and Saints Row series), a great focus of the game is on martial arts combat and free-running sequences.

It later received numerous paid downloadable content, including expansion packs, new outfits (often with bonus weaponry and abilities), new vehicles, and boosters to give players an early advantage. The game later received an updated re-release for the Xbox One, PlayStation 4, and PC, with technical enhancements and all non-booster DLC included, on October 14, 2014 (as Sleeping Dogs: Definitive Edition). Players who pre-ordered the retail Definitive Edition version received a limited-edition artbook.

The game is known for its troubled and prolonged development from its original publisher (Activision), beginning in 2008 as "Black Lotus", then re-worked years later as a spiritual successor to the True Crime series (as both "True Crime" and "True Crime: Hong Kong") before being cancelled in 2011. It was picked up a year later by Square Enix, who allowed United Front to resume development (with help by Square Enix London) and published the game later that year. It is considered United Front's signature game before their closure in 2016.

Playing as Wei Shen the player completes various missions from both sides of the law. Depending on how you complete your mission plays a huge part on how much experience you gain from the police and triad. By completing police missions, lessening nearby environment destruction, and reducing the amount of innocent civilians killed will result in an increase to your police xp. As compared to completing triad missions and defeating your opposition in brutal ways such as environment kills will increase your triad xp. As players gain more police xp and triad xp they are given ability points which allow players to customize their players skills.

The game has on foot, free-running sequences. In these sequences, the player is chasing a criminal. As a Wei runs, he pushes people out of the way and vaults over objects. Hong Kong has been mapped in such a way that it's adapted to the game play. During these chase sequences, the player will engage in hand-to-hand combat. Wei can use his fists, as well as weapons such as knives, meat cleavers and the environment. Enemies can be pushed into TVs, have their faces run against vents and and be thrown from rooftops. The game also has a counter system where an enemy flashes red to indicate when a counter can be performed.

The melee combat is reminiscent of Batman: Arkham Asylum and Batman: Arkham City, bringing a similar timing and counter based approach to fights. The main attack button can be done in normal and heavy versions by tapping or holding to button, the counter button can (and should) be hit when an enemy is highlighted red, and the grapple button allows you to grab most enemies. Once grappled you can punch, throw, drag, or preform a variety of environmental attacks, which range from throwing in a dumpster to shoving a persons head into an incinerator. Wei also has the ability to lock onto enemies which allows for more precise and creative attack patterns. A specific side quest allows Wei to learn more combos to help him take down foes in even more ways.

The game incorporates the cell phone function that has become a feature in many open world games, most notably GTA IV. Using his phone Wei can call contacts (Triad Members, Girls, Police handlers, etc) to gain access to side/miscellaneous quests. There is also a text feature, but it always sends scripted messages that are used in the context of a mission. Wei can access the variety of CI Reports, Background info, and surveillance gatherings through the reports tab, access the social hub, and during some missions take pictures.

One of the key features of the game is known as Face. It has several passive advantages to help the player outside of combat, such as making consumables last longer, discounts, and additional contacts, but it is most obvious in combat. Dealing damage (it seems that more impressive attacks/counters will help more) will fill up the Face Meter, and once it is filled up, Wei regenerates health, intimidates enemies, and through unlocks gains additional advantages such as unblockable attacks and reduced damage. Face is upgraded through side missions and goes to level 10.

Players who grappled and parachuted their way through Just Cause 2 will get a little extra when Sleeping Dogs detects a save file from that game on PS3, Xbox 360 or PC: a Rico Rodriguez outfit that also boosts the player's ability to board and hijack moving vehicles from a distance.

Each of the three expansion packs include a different side-story that's completely separate from the main campaign. Completing specific parts of each pack unlocks some outfits in the main story.

A bizarre horror-themed side-story in which an army of Jiang Shi (among other demons) have risen and the citizens of North Point are possessed by a hellish ghost named Smiley Cat, thirsty for revenge.

To rescue his girlfriend and banish Smiley Cat back to Hell, Wei must seek out powerful Chinese magic and defeat Smiley Cat's armies, including the ghosts of Triad enforcers he defeated in the past.

Stylized by classic 1970s Hong Kong kung fu films (such as Enter the Dragon), The Zodiac Tournament has Wei invited to participate in an illegal martial arts tournament led by the charismatic Dr. Zhang at the mysterious Zodiac Island.

The cutscenes are filtered to resemble old aged film while some sound effects are dubbed with sounds from that film era.

Unlike the other two expansion packs, The Zodiac Tournament is only accessible from the main story, rather than its own separate main menu entry.

Year of the Snake

Themed on law enforcement, Year of the Snake takes place before the 2013 Chinese New Year, when a mysterious cult plans to usher in the apocalypse by destroying Hong Kong themselves.

Due to his previous recklessness, Wei is given punishment duty as an ordinary police officer and must utilize the limited resources given to him (eventually gaining access to SWAT equipment, including riot-suppressing gas grenades).

In the Definitive Edition of the game, most outfits must be purchased with in-game currency through a special shop at the Night Market. Some content, such as those in the Police Protection Pack, must be unlocked by completing certain missions.

These packs are completely optional and are not included in the Definitive Edition.

The Characters are listed with their respective voice actors 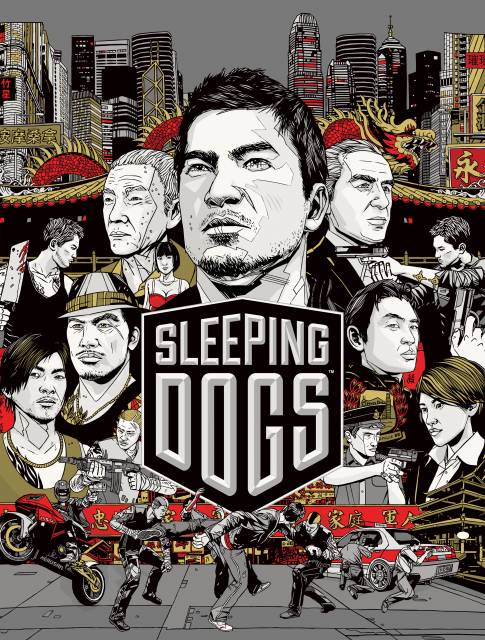