A free to play RvR MMORPG developed by JoyImpact and published in North America by gala-net.

An MMORPG with an emphasis on realm-vs-realm (RvR) combat. Aika Online is designed around battles with over a thousand people on each side fighting.

Aika Online is also notable for it's 'Pran' system, whereby you raise a pet to higher levels.

Aika is a fairly standard MMO, with a few twists. The PvE gameplay is fairly similar to a number of other Korean-developed MMOs, and features questing as well as the ability to level up primarily by grinding monsters. The PvP is based on wars between the five individual nations, and consists of large scale, full-nation battles over a contested fortress, smaller raids for one of the five relics, as well as smaller, instanced battlegrounds. Aika also features a special pet type, called the Pran. Prans can be gotten at level seven, and level up alongside the player, eventually taking a number of different forms. Prans have useful buffs and abilities, and their appearance can be customized.

The level cap of Aika is 50. There is currently one server, and each account may have three characters on the server. The game is currently in open beta in North America, although it has been stated that there will not be a character wipe at the end of OB, effectively making it launched.

Aika online features six different classes, all of which are available to each nation. Somewhat unusually, each class is limited to a single gender -- all Clerics must be female, for example.

The healer of Aika Online. The cleric has a few magic attacks, but for the most part her skills are focused on healing, curing, and buffing. The cleric can resurrect, and has abilities to increase speed and increase damage against the undead.

The stealthy DPS class. The Dual Gunner, as the name implies, uses two guns to do damage, and must purchase bullets to fire. The Dual Gunner also has access to stealth, poisons, a number of self-buffs, as well as the ability to prevent an enemy from regenerating mana.

A holy warrior. The Paladin has access to both melee and magic, and can do some healing as well. The Paladin is especially strong against the undead.

A primarily-single target DPS class. The Rifleman can attack from range, use stealth, stun enemies, and has a number of abilities for both spike damage and DOTs. At later levels, the Rifleman has the ability to construct turrets to attack enemies automatically. Like the Dual Gunner, the Rifleman must purchase bullets for his gun.

The Warlock is the magic-using DPS class of Aika Online. He has a number of single-target and AoE magic attacks and debuffs, as well as strong crowd control abilities.

The tank class of Aika Online. The warrior has melee damage abilities, including a few AoE, as well as a number of skills for blocking and self-buffs. The tank also has the ability to taunt enemies and increase his aggro.

Aika Online has five different nations. At level ten, you may complete a quest to become a citizen of a nation -- doing so will give you access to any nation-wide buffs in effect, as well as other benefits. Until then, you may travel freely between the different nations; however once you are a citizen, you may be attacked by other players if you travel to another nation (or if they travel to yours). Player killing players from other nations may earn you Honor points. Killing players of your own country will earn you infamy and a number of debuffs. An item may be purchased from the cash shop to let a citizen join another nation.

In the lore, there are differences between each nation, however from a practical standpoint the only difference is how dominant they are in RvR at any given point.

The dominant guild of each nation becomes the Lord Marshal and have the ability to set tax rates and affect the political balance of the game.

PvP, in the form of Realm vs Realm battles, has been marketed as one of Aika Online's high points. Aika has four main PvP systems, which award different rewards and amounts of Honor points, the PvP currency.

Battlegrounds are small-scale PvP instances ranging from 6v6 to 24v24 players. To queue up, players teleport to Hero's Square, a neutral area, and join the lobby. The battlegrounds are a team deathmatch battle between two teams of different nations.

The Castle Siege mechanic is the most trumpeted aspect of Aika Online, supposedly boasting 1000v1000 RvR battles. The Castle Siege consists of the current castle holders (the victorious nation from the previous siege) defending the castle against the other nations. Unlike other PvP types, Castle Sieges are scheduled events which are held weekly.

There are five ancient relics in AIka Online, each of which grants certain buffs to the nation which possesses it. Players may attempt to infiltrate an enemy nation to capture the relic and return to their own nation.

Players may enter other nations to kill enemy players, or may kill those who enter their own nation. Players will gain Honor for killing players of enemy nations of the appropriate level. Players may also attack and kill players of their own nation; doing so will earn Infamy, which gives a number of debuffs and additional costs. An item may be purchased in the cash shop to reset Infamy.

Like other MMORPGs, Aika Online offers PVE content primarily in the form of quests and instanced dungeons; it is also possible to earn a good amount of EXP from grinding/farming mobs. Following the quest chains from the beginning will lead the player along the game's storyline, as well as pointing the player to appropriate-level dungeons. Aika offers an LFG (looking for group) interface for those looking to group up or tackle dungeons.

Prans are pets which follow the player around and offer useful passive buffs, special abilities, and additional storage space. Prans may be obtained at level seven by accepting a quest at the Pran Station in Regenshein, and then turning in the proper number of essences for the type of Pran you would like. Each account may have two Prans (across all three characters), and Prans may be transferred and stored at the Pran Station. Prans have a hunger meter, and must be kept fed with food from either the in-game merchants, or from the cash shop; a hungry Pran will not level and may eventually desert the player and return to the Pran Station.

Prans have a 'personality' which develops from the interactions that they have with the player. At certain times, a Pran will request to talk to the player, and depending on the answers that the player gives, the Pran's personality will evolve in one direction or another. The Pran's personality may also be changed by feeding it food purchased from the cash shop. Every Pran starts out as 'cute', and may evolve into one of the following:

Prans come in three varieties, Air, Fire, and Water. Each of the Prans adds elemental damage to attacks, and increases resistance to their element -- for example, a player with a Fire Pran would do additional Fire damage, as well has have increased resistance to Fire.

The Fire Pran is an offensive Pran which has passives to boost attack, max HP, and increase the Critical Hit percentage.

The Water Pran is primarily defensive, and has abilities to boost maximum MP, increase the MP regen rate, boost resistances to status effects, and add a damage-mitigating shield.

Prans level up alongside the player. At certain levels, they will change form, requiring a return to Regenshein.

Each class gets a distinct mount, which may be obtained at level forty either by completing a series of quests (which include spending around 500,000 gold), or simply paying 2,000,000 gold outright.

Aika Online has a crafting system which allows players to craft weapons and armor, as well as break down existing items for salvageable components. Certain high-level crafting ingredients may be purchased from the cash shop. 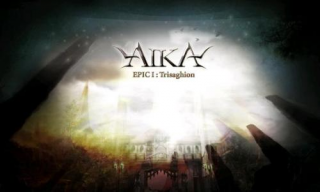