SOCOM 4: U.S. Navy Seals (or 'SOCOM: Special Forces' in PAL regions) is a PlayStation 3 third person cover shooter. After taking a break from development duties, the original developer Zipper Interactive once again took the reigns for this iteration of the series. The game was initially slated to be released in fall 2010, but was delayed until April 19th, 2011. This is the second SOCOM: U.S. Navy SEALs game released for the PlayStation 3, and the 10th in the series. Players have the option of playing the game using either a traditional controller or the PlayStation Move.

This game takes place in Southeast Asia, and has the player controlling Ops Commander Cullen Gray. You lead a team of NATO special forces deployed to the Strait of Malacca, which connects the Pacific and Indian Oceans between Indonesia and Malaysia. Your team consists of two Westerners, Wells and Schweitzer, and two South Korean operatives, Chung and Forty-Five, who is female and plays an important role in the campaign.

The game also features "stealth" missions where you play as Forty-Five on her own. Hiding and sticking to the shadows will be a necessity in these levels.

SOCOM 4 is a squad-based tactical shooter much like previous games in the series. Players can now give orders in real time like issuing squad commands, setting waypoints for teammates, as well being able to use Command Mode to set how many or how to take down enemies on your teammates way to an objective. In real time, the screen will slowly start to gray as you have a choice of options to choose from as the game is still going.

Throughout the campaign, the player will have to fight through enemies with intense gunfire, as well as using stealth to infiltrate objectives undetected. As players collect intel, air-strikes will be available as well as strafing runs on enemies. The Zipper team has stated they've really foucsed on artificial intelligence in the game, making them better at using cover, as well as flanking and making better choices on the battlefield.

SOCOM 4 features a robust online set of features, with 32 player counts, 9 maps (10 including the pre-order bonus "Abandoned"), and 4 different modes. All modes are playable on all maps, and players have the ability to create custom matches & playlists. There is an option for 5 player co-op. Other features include full clan support, with the ability to have up to 128 members per clan, as well as unlockable attachments for weapons. Also, team killers will automatically be removed from a game if there are too many friendly fire deaths.

There will be two separate ways to play the online modes:

The four multiplayer game modes are as follows:

Your standard game of Team Deathmatch, each team battles each other for the most kills before the time limit expires.

In this Capture the Flag-type game mode, members of one team attempt to infiltrate the other team's base in order to capture data, and bring it back to their own base to uplink it.

In this unique combination of Conquest and Assault, each team fights to capture three satellite points on the map. Once this is done, they are able to triangulate the position of the opposing team's base, and attack it.

The insurgent team has a number of bombs around the map, and the Spec Ops team must defuse them all before time runs out. This mode features the "Bomb Technician" character, played by one member of the Spec Ops team, who is charged with defusing the explosives. The Bomb Technician is equipped with heavy armor and an automatic shotgun, and is randomly chosen at the beginning of each game.

For $149.99, players can buy The Full Deployment Edition which includes:

If players pre-ordered the game from Gamestop they would be given access to the popular multiplayer map "Abandoned," which is an updated version of the map from the original SOCOM and SOCOM 2. Players will also gain access to the "Super M90 Shotgun." Pre-orders from other retailers included the Super M90 Shotgun code.

During the week of January 17th 2011, it was announced that there will be a SOCOM 4 beta starting before the release in April. On March 4th, the full details of the Beta were announced on the PlayStation Blog:

The SOCOM 4 Multiplayer Beta will roll out in four separate phases. It’ll begin with a small, private group and then expand weekly from there until it’s freely available to everyone! Here’s the schedule for each of the beta’s rollout phases:

The beta is scheduled to run until April 13th, at which point the servers will be taken down in preparation of SOCOM 4′s retail release on April 19th! 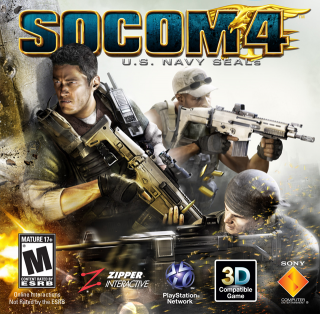