The game features 318 levels spread across 8 differently themed episodes, each of which sees you attempting to destroy the green pigs by firing various types of "angry birds" using a slingshot with touch controls. In each level, you can gain up to a three star score based rating, which depends upon on how much scenery you destroy and how many birds you have left over at the end.

There are over 20 secret golden eggs hidden throughout the game. They can be earned by completing levels or by finding them in hidden locations in the levels and menus.

There are eight types of bird in the game, and most have a special ability that is activated by tapping the screen.

Announced on the official blog on December 23rd, 2010, the Mighty Eagle is available as an in-app purchase. The one-time cost is $0.99/£0.59/€0.79. The mighty eagle acts as a level skip on uncompleted levels, with a limit of 1 use per hour. On completed levels it adds an additional scoring system. If the player destroys 100% of the objects in the level with the eagle, a feather appears above the star ranking.

The game is downloadable on the iTunes App store, including the full paid version, a free 'Lite' version containing 12 levels and a HD version for the iPad. It should be noted that unlike many Lite version of Angry Birds is not a demo in that the levels for it and the paid version are entirely separate.

It can also be downloaded from:

The game has also been released for the PS3, PSP, PC and Windows Phone 7. A Nintendo DS version is also announced to be in the works.

The price for PS3 (PlayStation 3) and PSP (PlayStation Portable) is $3.99. The game can be purchased off of the PSN (Playstation Network) store and Angry Birds is found under "mini".

The game is free on Android Marketplace, although it is ad supported. It was also made available on the Google Chrome web store on May 6th 2011. 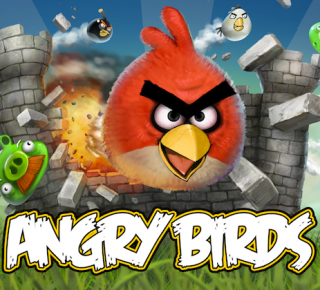