A twitch-based arena first-person shooter, based on the freeware Quake-based shooter of the same name, that is set in a Victorian-inspired alien future where the rules of the battlefield can change at any time.
Xbox 360 Games Store

Nexuiz (not to be confused with the freeware title of the same name) is a multiplayer sci-fi first-person shooter developed by Illfonic and published digitally by THQ for the Xbox 360 (on February 29, 2012) and PC (via Steam on May 3, 2012).

Made partially by some of the original Nexuiz team, this game is restructured with the CryEngine 3, including 4v4 Team Deathmatch and Capture The Flag twitch-based combat set in futuristic Victorian-influenced alien battlefields. It introduces the concept of "Dynamic Mutators", which temporarily alter the gameplay rules (from over 100 different rules, such as lowering the gravity, giving the team a full arsenal, and giving everybody jetpacks) by either collecting a special power-up scattered around maps, getting a killing spree, or capturing the enemy flag.

The lore of Nexuiz involves a fragile truce between the red-armored Kavussari and the blue-armored Forsellians, in which their combat turns from a centuries-old war to a never-ending arena spectacle (The Nexuiz Competition).

While the Xbox 360 version never saw any updates since release, the PC version received additional maps, game modes (such as free-for-all Deathmatch), increased player cap (up to 32 players), and support for user-created content (via Steam Workshop). The PC version also received an alternate client, titled Nexuiz Stupid Mode, allowing for much higher quality shaders and other graphical effects, at the cost of performance - primarily meant for benchmarking and screenshots.

Due to THQ's bankruptcy, both versions of the game were delisted from their respective marketplaces (alongside the discontinuation of their "master servers") on February 2013. After three years without any online capability, the PC version of the game was re-released by both Illfonic and Psyop on March 14, 2016.

There are nine weapons to use in Nexuiz, each with their own primary and secondary attacks. Headshots using these attacks deal massive damage. Players can also melee enemies with any weapon, dealing heavy damage (instantly killing them when smacking them from beind).

Certain Mutators grant a "super" version of the weapon, giving them enhanced attacking properties and infinite ammo (as long as the mutator is still in play). Once the Mutator is over, the weapon turns back into its normal form.

The six items found throughout each map include both Cell (blue) and Munitions (red) ammo, small and large armor pickups, the Strength pickup (where all weapon damage is doubled for a short time), and the Dynamic Mutator pickup (which grant the player with a choice of one of three Mutators).

(Weapon switch key: 1) Each player's starting weapon with infinite ammo. Each faction has their own unique shotgun appearance (though these shotguns do not differ in functionality).

The Super Shotgun vastly increases the rate-of-fire for both attacks.

The Super Crylink changes the attack to a "telefrag gun". By aiming at an enemy for a short period of time while firing, the user teleports at the enemy's position, instantly killing the enemy.

The Super Electro changes the attack to fire large area-of-effect balls of electricity that dissipates over a short amount of time, causing continuous damage to anyone inside it.

Attacks using the Super Nex are one-hit-kill (no matter where it hits on the bodies of enemies), similar to the Instagib Rifle from the Unreal Tournament games.

(Weapon switch key: 5) Uses Munitions (red) ammo. A rapid-fire mini-rocket launcher. Mini-rockets can either detonate upon impact or bounce along surfaces before detonating.

The Super Hagar changes the mini-rocket to a shrapnel grenade, detonating upon impact while dealing larger area-of-effect shrapnel damage.

The Super Clancutter changes the attack to a powerful beam weapon (similar to the Crylink's secondary fire).

(Weapon switch key: 7) Uses Munitions (red) ammo. Rocket launcher that fires missiles in an arcing trajectory. Not as powerful as the Rocket Launcher, but has a faster rate of fire and less ammo count. Missiles can either detonate upon impact or detonate after a short amount of time.

The Super Mortar changes the missiles into proximity mines, exploding when an energy or teammate is near. Once the mutator is over, all proximity mines explode for total carnage.

The Super Rocket Launcher increases the amount of missiles fired at a time while automatically homing to the target on the user's crosshair.

The Super Ravager makes the attacks acts like secondary fire, but turns the bullets into poison bullets (dealing continuous damage to hit enemies over time).

Similar to other arena-based first-person shooters, Nexuiz features unique game mechanic adjustments (such as influencing the game's gravity and granting infinite ammo) known as "mutators". Unique to this game are Dynamic Mutators, which temporarily alter gameplay for one or more players. Players with a Dynamic Mutator in effect have three Mutators to choose from, the one they choose being put into one of four queues: Everyone (Yellow), Self (Grey), Friendly Team, and Enemy Team. They can earn a Dynamic Mutator in one of five ways:

Mutators below that are marked with a star (*) can be toggled to "permanent" in Private and Offline matches, making the effect available to all players at all times. Doing this removes the Dynamic Mutator functionality. 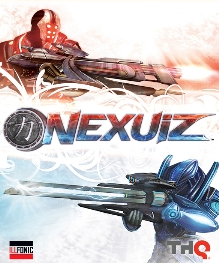