Pokémon Black and White are the fifth generation of Pokémon games for the Nintendo DS. Both introduce several new game play innovations to the series including a more complex battle system, fully-animated 3D models and environments, extensive online integration, and a refresh of the entire selection of Pokémon.
Nintendo DS

Black and White are the fifth generational entries in the Pokémon series, the first new generation to launch since the release of Diamond and Pearl in 2007. The developers of Black/White made extensive changes to the core game play design and presentation; changes much more immediately apparent than in any previous shift to a new generation. Unlike the Pokémon trainers in prior games, the male and female protagonists are adolescents, and both will play a prominent role in the story, regardless of whom is selected at the beginning of the game.

Black/White was released in Japan to critical acclaim, earning the fourteenth perfect score from Famitsu. It was also the most pre-ordered game in Japanese history. It was released in Europe on March 4, 2011, and in the US two days later (March 6). This was the highest-selling Pokémon game on launch day of all time, selling 1.1 million in one day. As of March 31 2016, it has sold 15.60 million copies worldwide.

Updates to the Formula

Pokémon Black/White takes place in the metropolitan Unova Region. Towns are instanced, rather than open as in previous games. Some townsfolk will enter and leave areas instead of sitting around idly pacing. This is designed to make the game feel livelier. In crowd situations, some of the people standing round or passing by will also react to what's going on- yelling "watch out" when the player is too close or commenting on something someone else said.

The season of the game will change depending on the month of the real year, and wild Pokémon will vary not only on area, but on season as well. Different areas of the environment will also be accessible during different seasons. For example: during the winter, enough snow will accumulate to allow the player to attain the top of a cliff that was otherwise unattainable. Certain Pokemon have palette-swaps as well, changing their looks to match the season. This has no impact on their stats, though. The seasons also affect weather conditions- in place or rain, there could be snow, or a lot of sun.

TMs will no longer expire after one use so they will act very much like HMs. Except that HMs let the player use the moves outside of battles as well.

Battles in Pokémon Black/White are much faster-paced than in previous games, and no longer feature static sprites. Instead, Pokémon are constantly in motion, even when idle, and the animation will change depending on the scenario. It also features a full back-sprite, rather than a partial as in previous games. During attacks, the camera may zoom in or out on certain Pokémon, giving the battles a more cinematic and fluid motion. The camera will also start panning around if the player is idle for a short amount of time. In addition to these visual improvements, new battle systems have been introduced such as:

Triple battles have the player send out 3 Pokémon at the same time. Each Pokémon can attack, switch, or shift each turn. Switching swaps one of the Pokémon on the field with one on the bench. Switching has highest priority and will always happen first in a turn. Shifting however lets the player change position with an adjacent Pokémon on the same team. The Pokémon that didn’t initiate the shift can still attack that turn even though it shifted places. Shifting has a priority of 0 so when the shift happens during the turn is dependent on the speed of the Pokémon that initiated the shift.

Targeting attacks in triple battles depend on where the attacker is positioned. A Pokemon in the center can target anyone, however a Pokémon positioned on a side can only attack the Pokémon directly in front of them or the center, but not the opposite side.

Like with triple battles three Pokémon are sent out at the beginning. Unlike triple battles however only one fights at a time. The player may rotate the stage to switch the active Pokémon and immediately attack with the new Pokémon, making it more like a single battle with free switches.

The Wonder Launcher allows the player to use items in multiplayer battles based on a point system akin to a Super Meter. Each turn they are awarded points for what happened, they can spend points on items. Better items, such as max revive, cost considerably more points than items such as potions or antidotes.

Dream World is a FarmVille-like experience, where the player can link their Pokémon game to the website. They can then, for one hour a day, grow berries, trade items, or hunt for Pokémon.

It can be used by going to www.pokemon-gl.com it can be used without owning a Pokémon game but will have limited options.

The player can select the option to be matched up with a random player from anywhere in the world. They have only four buttons to interact and let them know how they feel about the trade: a happy face, a sad face, a heart and an exclamation. Each player selects three Pokémon in combination with these feeling buttons to gauge the other players interest. When three Pokémon are selected and agreed upon the players then choose the one Pokémon they would like the most from each others three, the trade then occurs. Once finished the players can continue trading or find a new trade partner.

An Improved trading and battle system was implemented for local Infra Red Communication Using the C-Gear. The new system allows for trainers to trade or battle after unlocking the C-Gear from any place without the need of being in a Pokemon Center, and trading can utilize all pokemon from the PC.

The game features 156 brand new Pokemon, and unlike the previous games, these are the only Pokémon the player will encounter before beating the main story and the Elite Four. However, the other 493 will be unlocked once the Elite Four is battled.

In addition to version exclusive Pokémon for Black and white, the games also feature version exclusive areas. In Black the player can visit the Black City, where they can fight high level trainers and buy rare items, while in white they will get the White Forest. In the White forest they will be able to capture rare low level Pokémon and find the same items they can buy in Black City. The Opelucid City Gym leaders will also differ between the versions, Drayden for Black, and Iris for White. They will, however, have the same Pokémon, and the same items. There is also a slight visual difference, where Black has more of a technology feel to it, and White is more rustic and natural. This can be seen in places like Opulecent, where the ground in Black is covered in lights (a sort or Tron feel), whereas the area in White is just regular ground.

Continuing the tradition of introducing new teams with new ideals in each game, Black and White introduces Team Plasma, a group who suggests that humans are harming Pokemon by forcing them into being pets and battling them. Their enigmatic leader, N, seems to view the player as a rival of sorts. He believes that if he befriends one of the legendary Dragons and defeats the Pokemon League Champion that people will view him as the Unova Region's legendary hero and he will therefore be able to convince them to release their Pokemon. The team also gives demonstrations and speeches in towns to convince people to free their Pokemon, as well as resorting to petty thievery and bullying.

The game's thumbs will be animated.

The C-Gear shows the system power using three bars in a battery icon, rather than two on older Nintendo DS systems. 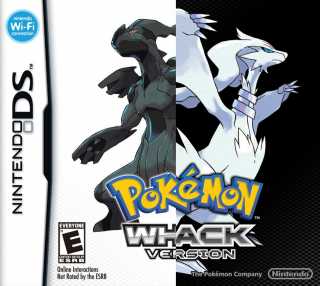