In the year 2097, the city of Neo New York is run by a tyrant named Raptor. It's up to Slash and his sword, the X-Kaliber, to stop Raptor and his army of Morphs in this futuristic brawler.

X-Kaliber 2097 (JP: Sword Maniac) is a cyberpunk side-scrolling brawler-platformer action game for the Super Nintendo. The player, as the swordsman Slash, must fight his way through the city to topple its despotic ruler Raptor and rescue his partner Alix.

The game's marketing pushed the involvement of electronic/industrial group Psykosonik, which provided the game's music for the US version of the game. Hitoshi Sakimoto and Hayato Matsuo composed the Japanese version's soundtrack.

X-Kaliber 2097 is set in the distant future, in the city of Neo New York. A tyrant known as Raptor rules the city through treachery, bribes, and his army of "morphs". Two agents, Slash, and his partner Alix refuse to submit to Raptor's dominion and this causes him great fear. Raptor decides to capture Alix and hold her for ransom until Slash surrenders and hands over his sword, the X-Kaliber. Unfortunately, Slash has decided to taken it upon himself to defeat Raptor and his henchmen once and for all.

The story mode of X-Kaliber 2097 is a 2D side-scrolling platformer/brawler, where the player controls Slash as he progresses through each stage. The stages are a mix of platforming and fighting off robotic soldiers using a few different moves such as jumping, ducking, blocking, and several different kinds of sword attacks. At the end of each stage, Slash must duel one of Raptor's henchmen, which is the most challenging part of the game. Each stage boss has a similar set of moves to Slash and the player must learn each boss's strategy to win.

The duel mode of X-Kaliber 2097 is a 2D fighting game that allows two players to choose from Slash and the game's 'boss' characters and fight, using each character's own set of moves. 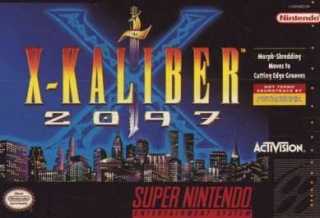